(This story, which originally appeared in 2020, has been updated to include information on the new Smiley Lecture Series. The lecture series kicks off May 6 with “Embracing Democracy in Modern Germany,” by history Professor Michael Hughes, presented on Zoom. Free and open to the public. Register)

This started out as a bit odd, end-of-year message sent to the Wake Forest Facebook page. A woman in Texas claimed to have found the World War II dog tag of a Wake Forest professor on her family farm. And not just any professor, but one of the most well-known, if eccentric, professors to ever walk the Quad.

“Lo and behold, look what I found,” Destiny Branson posted on Facebook after she traced the military ID to Wake Forest. Destiny, a delightful Texas travel agent and mother of two young daughters, with a delightful first name, was as excited as she could be.

She posted a photo of the 80-year-old dog tag on Facebook. The name didn’t mean anything to Destiny at first, but it’s instantly recognizable to alumni from the 1950s to the 1990s: “David L Smiley.” 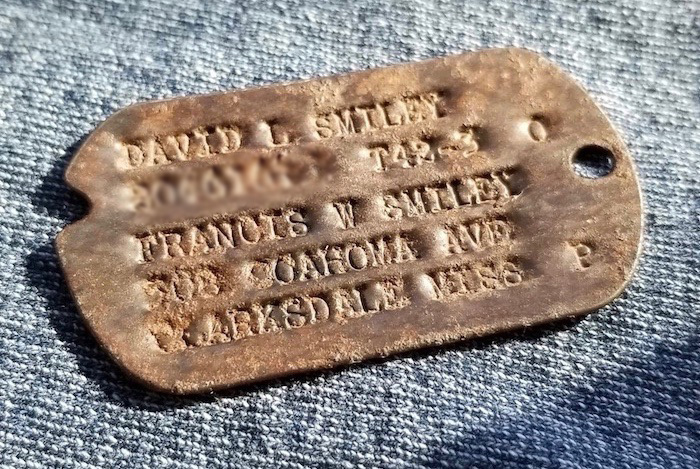 Smiley, a popular history professor who brought history to life with colorful tales, surely would have enjoyed Destiny’s tale of the long lost dog tag. Destiny found the tag in late December, almost 15 years to the day that Smiley died in 2004. She was walking on her grandparents’ farm in Hamby, Texas — 10 miles from Abilene — when she just happened to see a small piece of metal in the dirt. Once she cleaned it up a bit, she realized it was a military dog tag.

The format of the dog tag dates to the early years of World War II. Those dog tags had a five-line format: name; Army serial number, tetanus toxoid inoculation dates and blood type; next of kin; street address; city, state and religious affiliation (P for Protestant, C for Catholic and H for Hebrew.)

Destiny knew she was holding a piece of history. She had never heard of David Smiley, but she loves a good mystery, so she decided to track him down. She did what any amateur sleuth would do these days. She Googled his name.

That led her to Smiley’s obituary and then to Wake Forest’s website, where she quickly unraveled the who part of the mystery, if not the how. 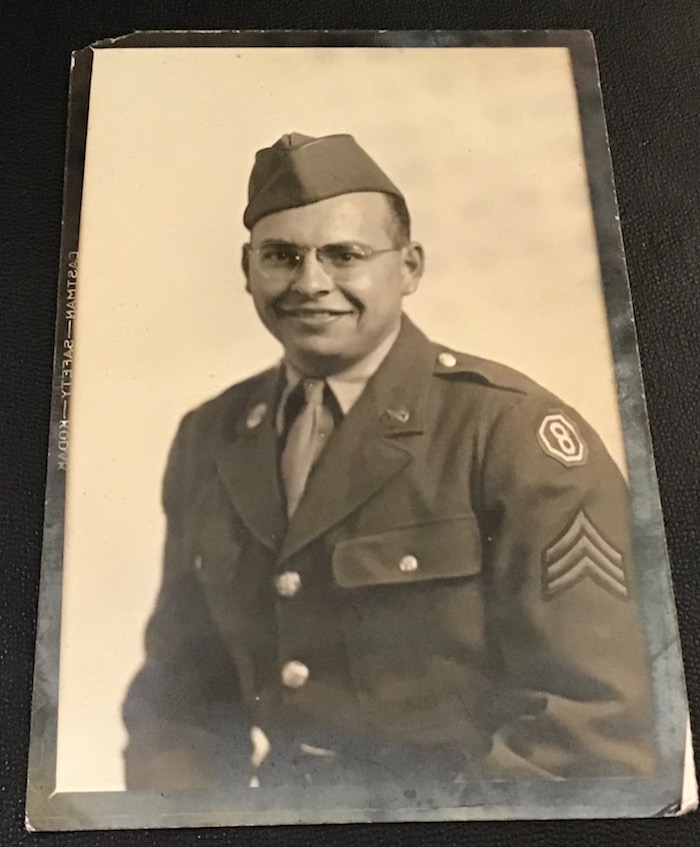 Smiley taught at Wake Forest from 1950 until retiring in 1991. He was well known for his engaging lectures in the classroom and for his eccentric behavior outside Tribble Hall. His classes were so popular that actress Jayne Mansfield visited one of his classes in 1963, and reportedly kissed him on the head when she left. Smiley could often be spotted roaming around the Quad picking up litter, walking through campus buildings turning off lights in empty classrooms or riding his bike to class, with a French beret atop his bald head.

Destiny had clearly done her homework, even tracking down where Smiley is buried (Forsyth Memorial Park in Winston-Salem). The professor she never met has become a kindred spirit. “I’ve read so much about him,” she said. “I love his quirky, eccentric character. It has been a lot of fun to track this down.”

Once she figured out who Smiley was, she was determined to return the dog tag to “its rightful owner,” as she put it. “I wouldn’t want someone to dispose of a part of my (family) history.”

Smiley had one daughter, Kay Smiley McKaughan (’74), who lives in Mebane, North Carolina. Kay was surprised to say the least — and grateful — to learn that a stranger had found a piece of her dad’s history and wanted to give it to her. “I couldn’t believe it. It’s a great a mystery. How did it get there?”

Smiley’s background offers one clue. He did serve in Texas during the early years of World War II, although Kay didn’t know if he had ever been in Hamby. 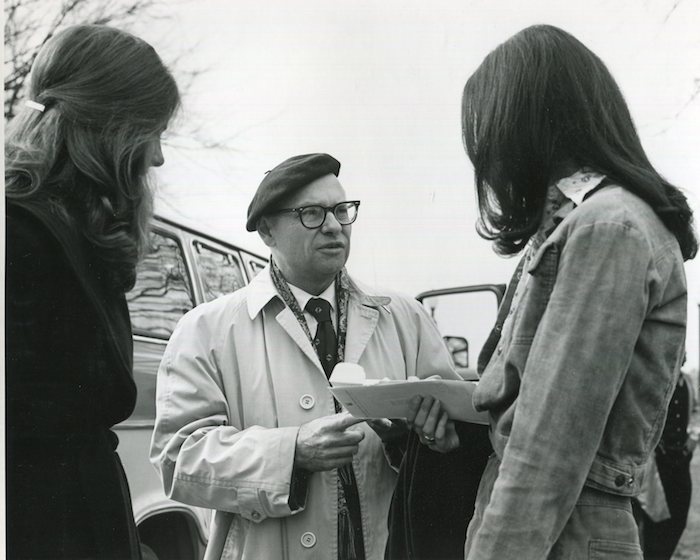 Smiley was born in Clarksdale, Mississippi, or as he was fond of saying, “I’m from heaven by way of Mississippi.” He enlisted in the Mississippi National Guard in 1939 as a musician in a regimental band. Two years later, he was assigned to an army field artillery group at Camp Bowie, Texas, outside the town of Brownwood, about 90 miles south of Hamby.

While he was serving at Camp Bowie, Smiley met his future wife, Helen, in a Sunday school class at the Baptist church in Brownwood. “I don’t know much about what my dad did in Brownwood except he met my mother,” Kay said. “I expect he was happily occupied courting her and meeting her family in San Angelo (Texas), or maybe a relation in Hamby?”

Destiny has played out various theories in her head trying to solve the mystery. She thought she might have found a connection between her church-going grandmother and Smiley, a devout Baptist. Perhaps Smiley had gone to her grandmother’s church? But it turned out they attended different churches.

In 1943, Smiley was sent to England as a supply sergeant for a heavy artillery unit. He landed at Utah Beach in Normandy on D-Day plus 6 in June 1944 and later fought in the Battle of the Bulge.

After the war, Smiley returned to Texas, married Helen and earned his undergraduate and master’s degrees at Baylor University. He joined the Wake Forest faculty in 1950 and spent his entire career happily teaching generations of Wake Forest students and teaching a popular Sunday school class that was broadcast on WFDD.

“I miss my dad every day,” Kay said. “It’s lovely to know my dad is still remembered at Wake Forest.” 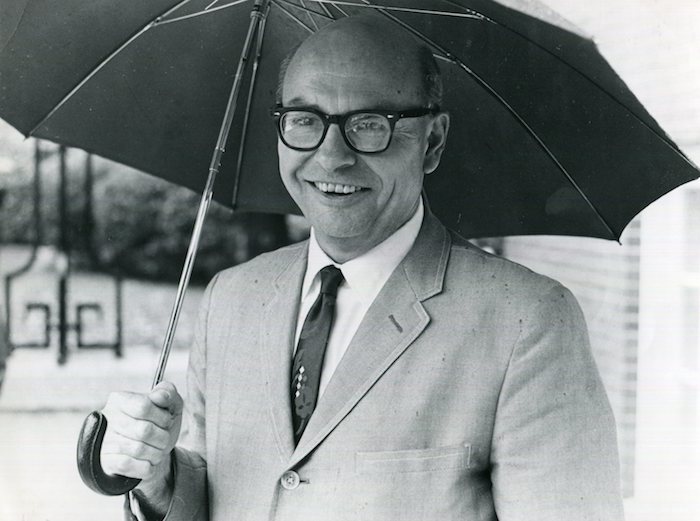 Destiny believes it was fate that she found the dog tag, and she may be right. The discovery came just as Wake Forest is remembering Smiley’s legacy with a new digital archive and a new lecture series.

Lynn Callicott Baranski (’88), a former student of Smiley’s, funded both projects. Lynn said she remembers Smiley’s kindness, love of students and love of history. “He was such an amazing professor and lecturer. He brought history to life in his wonderful storytelling that made going to class such a joy.”

After he retired in 1991, Smiley wrote a note to a former student that showed he hadn’t lost his sense of humor. “There comes a tide (sic) in the affairs of men and women when we must stow the gear, ship the oars, furl the sails and declare the voyage at an end.”