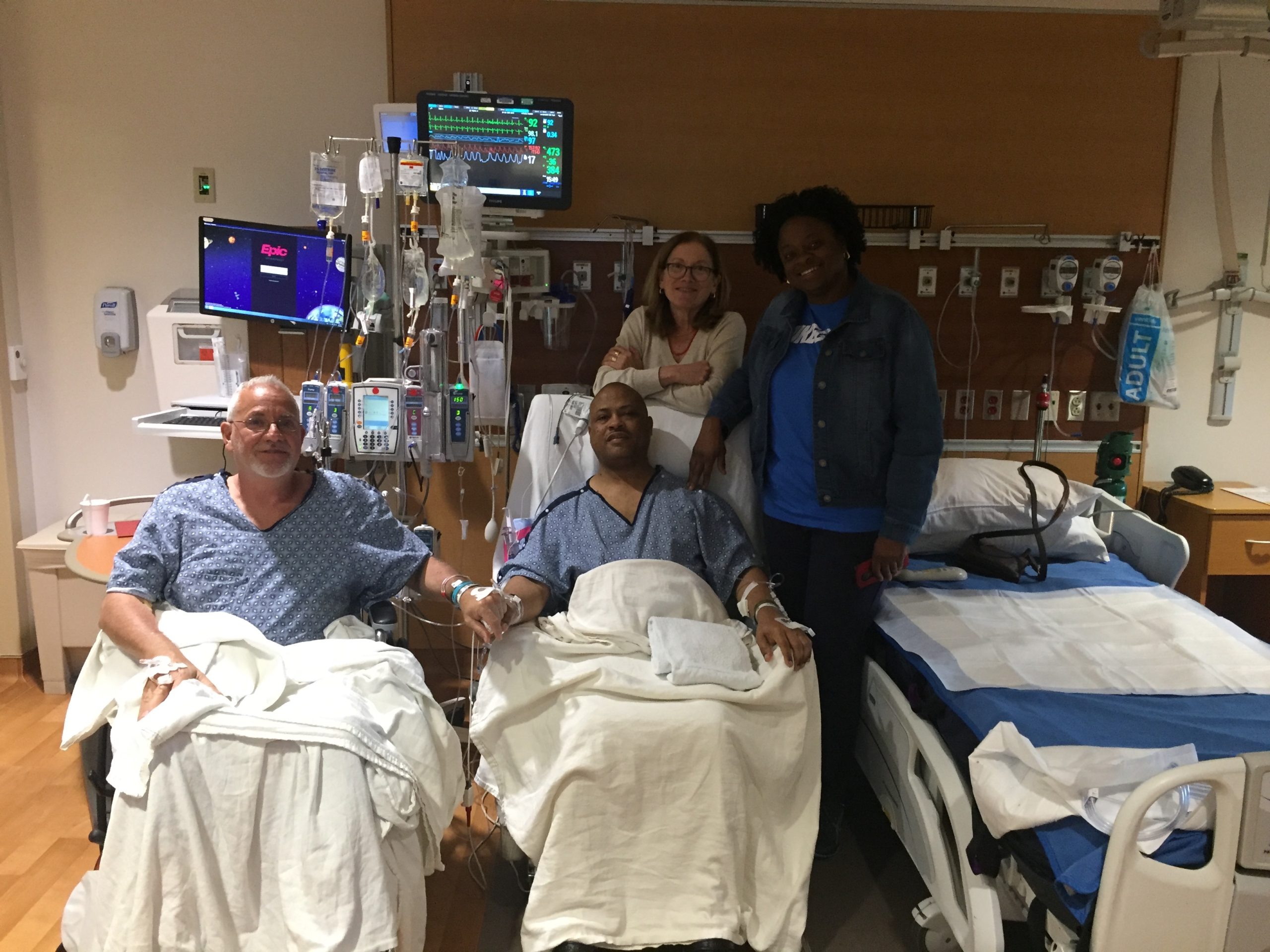 The thing about disease is that its dark power to bring pain and even death is often bested by the light it shines on human courage and love for one another.

Such is the story of Anthony Hughes and Vinnie Seidita.

Anthony, 51, assistant director of applications development, kept coming to work in Information Systems at Wake Forest even as kidney disease tortured him with 20 or more body cramps a day. They got so bad even his tongue would cramp, making it impossible to talk.

Only a few people in IS realized how sick he was. He showed up even when he was so exhausted he had to sleep four or five hours in his car before he could muster the energy to drive home each day — an hour and 10 minutes to Martinsvillle, Virginia.

“I could have gone on disability,” Anthony says. “I just love my job. I love my work, but I can do this anywhere. I’m here because I love the people.” 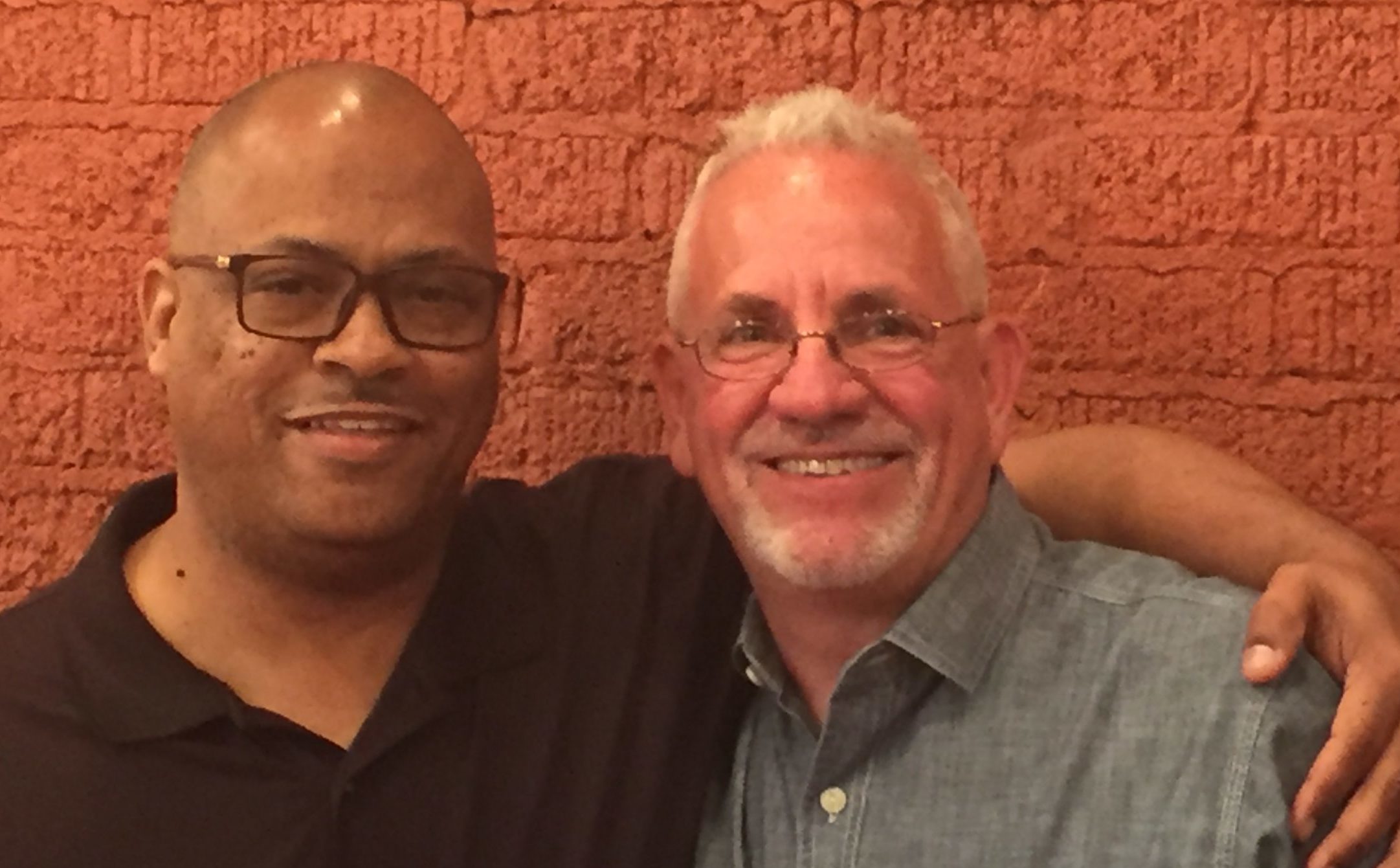 Anthony and Vinnie before the transplant surgery

Vinnie Seidita, 63, a former colleague, says Anthony is a humble man with a tendency to understate his own struggles and focus on others.

If it takes one to know one, Vinnie speaks the truth. He gave Anthony a kidney, pulling him from the brink. Yet both men agreed to talk with us about it only because they hope to inspire others. That’s what Wake Forest baseball coach Tom Walter did for Vinnie. Vinnie cemented his decision to donate after Walter shared his experience of giving a kidney in 2011 to a player, Kevin Jordan (’14), a story that drew national attention.

Mur Muchane, the University’s vice president for information technology and chief information officer, sees in the story of Anthony and Vinnie a chain reaction of human compassion, and perhaps a bit of divine intervention.

“I believe this story really does epitomize the very real and tangible ways the character of the Wake Forest community comes together and shines through so often,” Muchane says.

Anthony Hughes joined Wake Forest in 2010 after a career in Air Force logistics and jobs in Alabama and New York. In 2012, a routine physical showed his kidneys were functioning only 45% to 48% of normal. Anthony’s father had suffered from kidney disease, but Anthony felt fine and remained symptom-free for years after his diagnosis. He was on a waiting list for a transplant.

Information Systems had embarked on an ambitious 18-month plan to install a computer system called Workday, “and I had an integral role in that,” says Anthony. “Some weeks I would work 100-plus hours.” At night, he would collapse on his bed, unable to move even an arm or leg. “Some mornings … I literally had to fall on the floor and crawl to get up.”

By the time Anthony’s exhaustion forced him to stop and take another nap just 15 miles from home, “I said, ‘I can’t do this anymore. It’s too dangerous.’” 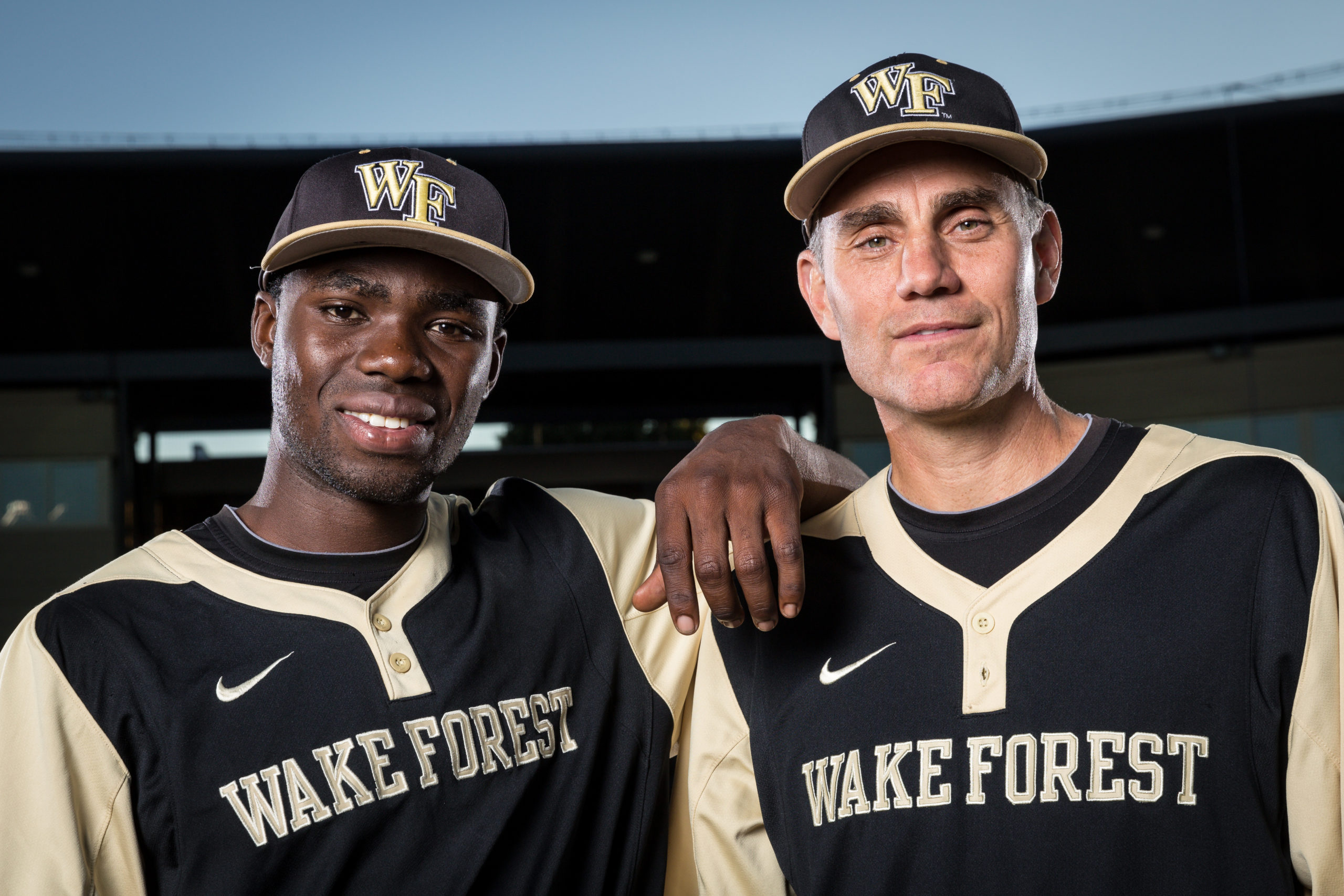 Kevin Jordan ('14) and baseball coach Tom Walter in 2014, both in full recovery after Jordan received one of Walter's kidneys in 2011. Photo by Ken Bennett

He and his wife, Courtnee, anticipating a move to Winston-Salem, had already enrolled their son, Isaiah, there to avoid a midyear school move. Isaiah had been commuting with Anthony each day. The doctors at Wake Forest Baptist Health told Anthony he would need daily dialysis when he dropped to 15% functioning. But dialysis reduces the likelihood of a successful transplant, so Anthony continued to hold off.

He suffered in his persistence. Because his kidneys failed to filter out creatine, his muscles started absorbing it, producing whole-body spasms. “It hurt so bad.”

“We’d be having a meeting, and he would always volunteer and then send you an email at 2 o’clock in the morning, saying, ‘I finished this thing.’ … People just think so highly of him. He’s so confident and hardworking and caring.”

Eventually Vinnie learned that Anthony needed a transplant and that no family members qualified to donate. Vinnie planned to retire to his home base in northern Virginia after his Wake Forest project. He began to consider donating his kidney. He had a friend who was “a benevolent donor,” giving a kidney to a stranger, and she was doing just fine, “so I had that data point,” says the software expert.

When Vinnie found out his blood type matched Anthony’s, “I thought, ‘Well, maybe that’s a sign.’” 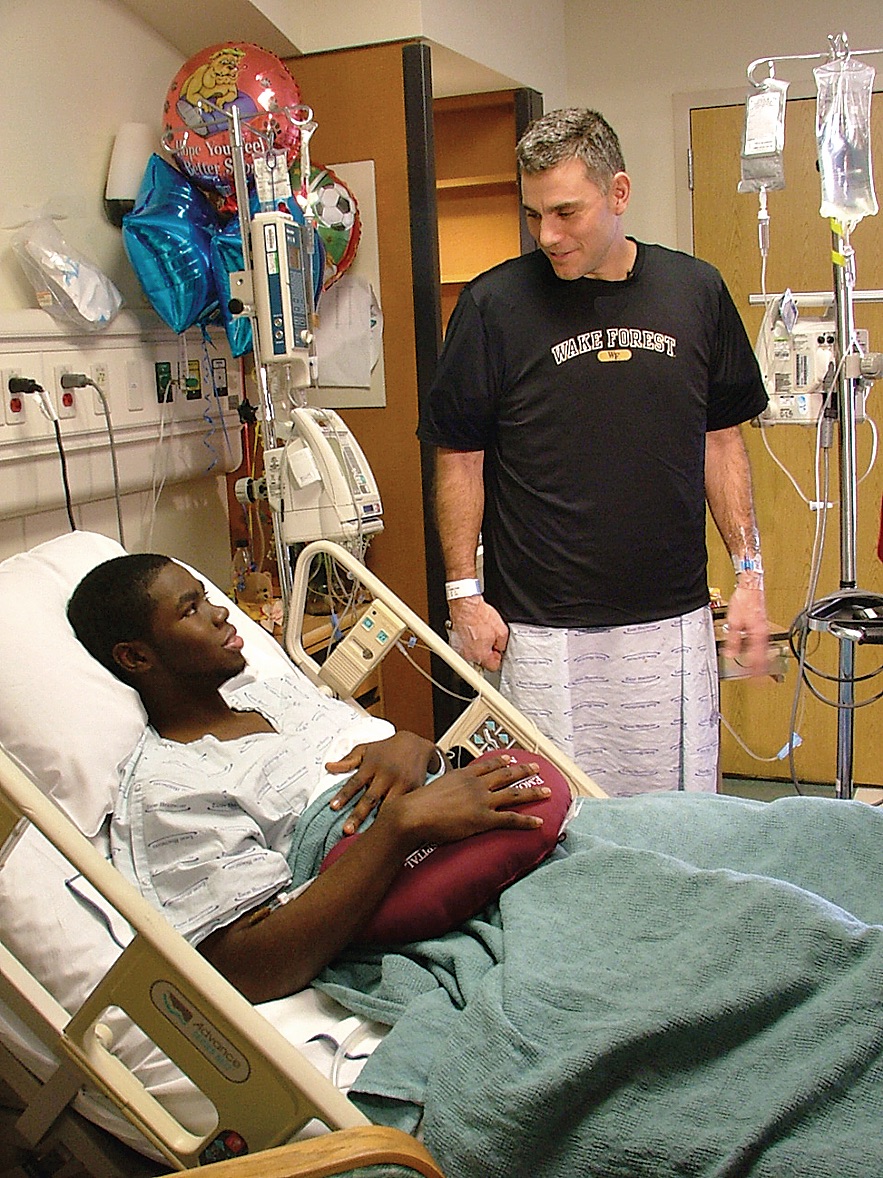 Baseball coach Tom Walter stands by the bed of player Kevin Jordan ('14) after the kidney transplant surgery in 2011.

Enter Executive Vice President Hof Milam. He suggested bringing in Coach Walter, who often speaks about leadership and character, for a Workday pep talk with staffers from IS, human resources and finance.

Vinnie, as Workday project director, met with Walter in advance. They ended up talking about donating a kidney and about the special relationship between coaches and athletes. “My son was a college athlete. … I told him if my son’s coach needed a kidney, anybody on the team would have given it to him,” Vinnie says, his throat catching. “That’s when I began to realize that maybe I needed to do this.”

Walter says he remembers his talk with Vinnie, who had worked at Georgetown University where Walter graduated. Walter has talked with dozens of people about donation since 2011, reassuring them that his health was completely unaffected. The conversations have been “truly a gift to me to be involved in a small way in these stories of people doing amazing things.”

Vinnie’s wife, Laura Brady, encouraged him. She told him she would get tested if he couldn’t pass the medical screening. Donating a kidney isn’t that big a deal, she says.

“It is to people, but it shouldn’t be. You can so easily live without one kidney. And it helps to know somebody and see how they go on in life perfectly 100% normal,” she says. 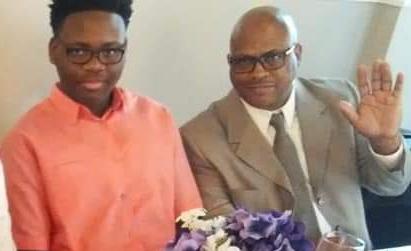 Isaiah Hughes, 16, with his dad

In November 2018, Vinnie came to Anthony’s office and told him he planned to donate. “I almost fell on the floor because I didn’t know he was even thinking about it,” Anthony says.

Vinnie says Anthony almost seemed to be trying to talk him out of it, and now he knows why.

Vinnie found out later that Steve Allen, a former IS manager at Wake Forest, planned to donate and was deeply disappointed when tests showed he couldn’t. Allen says Anthony is his friend and hero. “I love the guy. He’s just a great human being.” 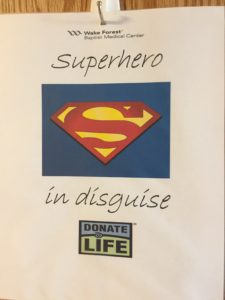 Vinnie says Anthony knew that Allen had agonized over being unable to help. “Anthony was trying to allay my concerns; if that should happen to me, I shouldn’t be so worked up. That’s how Anthony is,” Vinnie says.

Muchane, the head of information technology, says Anthony is “a jewel for Wake Forest,” and he sees Vinnie’s path to Anthony’s door as guided by more than luck. Vinnie ended up at Wake Forest through a recommendation from a consultant whose name Muchane had tucked away 20 years earlier. Add in Milam’s suggestion that Walter talk to the Workday team, and “as I think of the unlikely circumstances that threw all these people together, I say, ‘Wow, divine intervention,’” Muchane says.

Because of his age, Vinnie’s testing was rigorous. “I went through an unbelievable number of medical exams,” Vinnie says, “and luckily, they all turned out. And I saw that as a sign, too.”

At 8% functioning, Anthony had finally resigned himself to dialysis and had undergone training for it.

The fourth and final stage of kidney disease is called end renal stage. “When you get that stage in writing, … no matter how many times you talk about it or do research about it, until you see it by your name, you’re not prepared for it.”

Anthony had opted to receive the three- to four-hour daily treatments at home at night so that — no surprise — he could still go to work.

On a Monday, Anthony’s kidney function dropped to 6% — “basically dead levels,” the doctor told him. If Vinnie’s approval didn’t come by Thursday, dialysis would start. 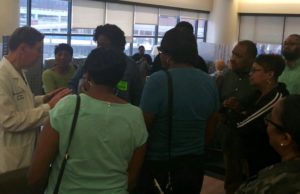 A crowd of friends surround a doctor at the hospital to hear how Anthony and Vinnie are doing.

The transplant on April 18, 2019, at Wake Forest Baptist Medical Center was so smooth that the new kidney began working even before the doctors stitched up Anthony, which is unusual. The body cramps, exhaustion and gout that had made him crumple in pain from a simple handshake disappeared. His large family surrounded him, and Wake Forest staffers from IS, finance and human resources offered to ferry Isaiah to school and brought food and support.

Anthony wasn’t quite through the ordeal, though. He suffered for many months with sores, including one that left a hole in his tongue that doctors thought might be cancer, 20 ulcers in his stomach and more in his colon before his drug regimen was adjusted. He’s fine now.

As usual, Vinnie says, Anthony was “always looking on the bright side. He would say, ‘Well, the good thing is it makes me not want to eat, so I’m losing a few pounds.’” 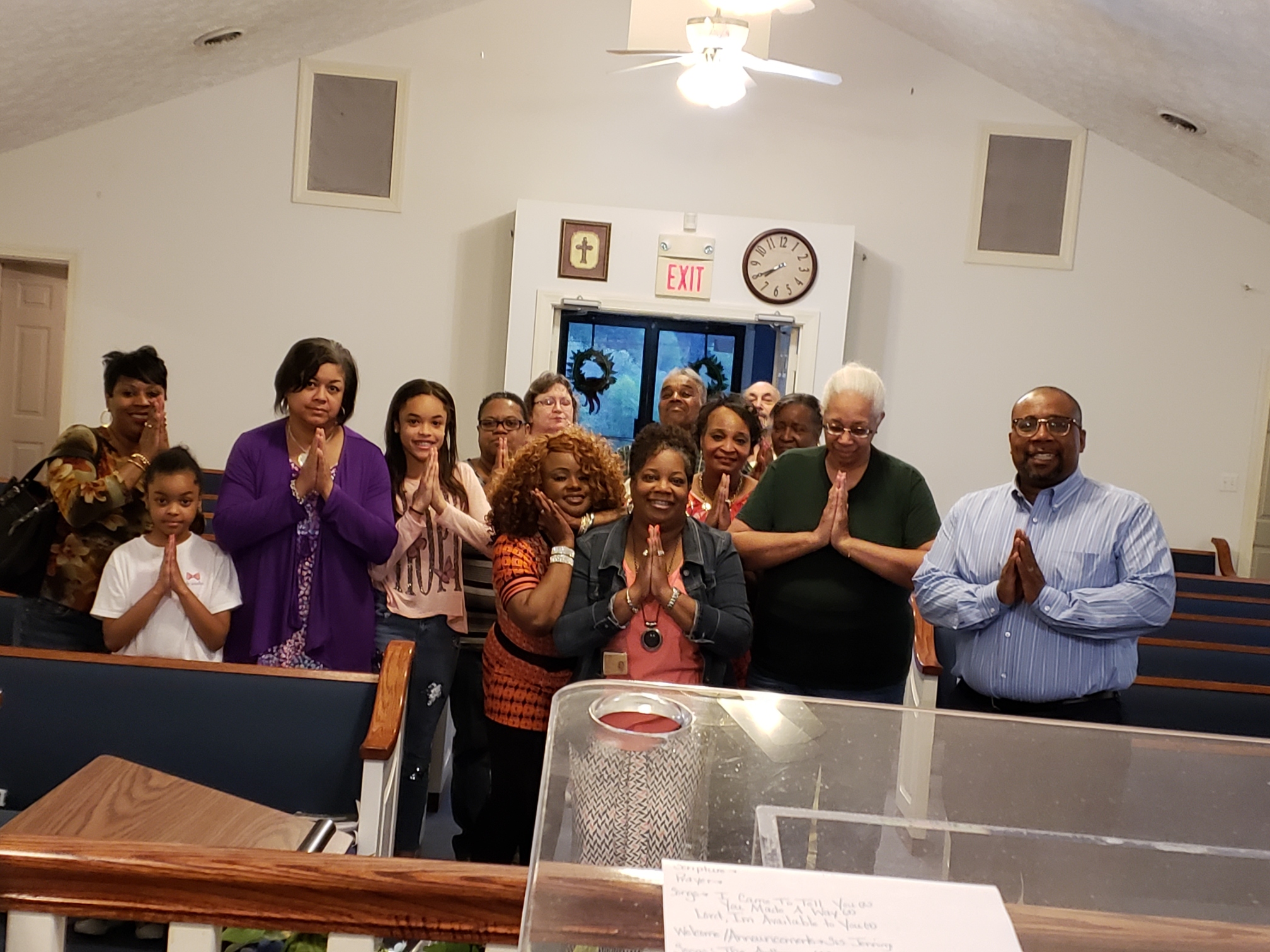 Anthony's church family prays for his surgery to go well.

Vinnie says he is healthier than ever, too. He had vowed to use this opportunity to treat his body better after years of intense work. He eats healthy. He goes to the gym. He’s lost 20 unneeded pounds

He hasn’t quite settled into retirement yet. After recuperating, he was back to helping people. He and Laura moved to New York for months to care for her mother, who had lung cancer that had spread to her brain. She’s now cancer free at age 87, thanks to immunotherapy.

“Vinnie’s really been a saint when it comes to never hesitating when I say, ‘OK, let’s go see mom; it’s our turn,” Laura says. “He’s right there. He cooks for her.”

Vinnie says Tom Walter’s words to him were right on target. “He kept saying, ‘You’ll just be so happy you did it,’ and that’s so true.”

Anthony is able once again to play basketball with Isaiah, now 16, and tend to the yard with Courtnee. He credits his outcome to his Christian faith. “I have a strong relationship with Jesus,” he says. “I give God the glory for the friends I have here at Wake Forest.”

Vinnie says it’s not lost on him that he went home from the transplant surgery on Easter morning.

“Anthony and I are always going to have that Easter connection.”