Part 2: Eric Bihl (’10) and Kennon Jones (’10) are nearing the end of a two-and-a-half-year cruise sailing around the world. Wake Forest Magazine caught up with them as they departed Saint Helena, bound for the U.S. Virgin Islands. In part 1 of a two-part email exchange, they talked about their biggest surprises, missing peanut butter, meeting Wake Foresters in unexpected places and how COVID-19 stranded them in Saint Helena. In part 2, they talk about life on board their 34-foot sailboat, the Temjuin, their best and scariest experiences, and what they plan to do next.

What was your longest stretch at sea?

Prior to COVID, the biggest stretch at sea was one of the earlier passages we undertook from Panama to the Marquesas Islands in French Polynesia — 3,864 nautical miles which took 29 days. We are currently on route from Saint Helena to the U.S. Virgin Islands which, if sailed directly, would be the longest passage at 4,100 nautical miles, or an expected 35-37 days. We will likely need to stop in Grenada for water however, which would be 3,750 nautical miles, just shy of the Panama to Marquesas passage. 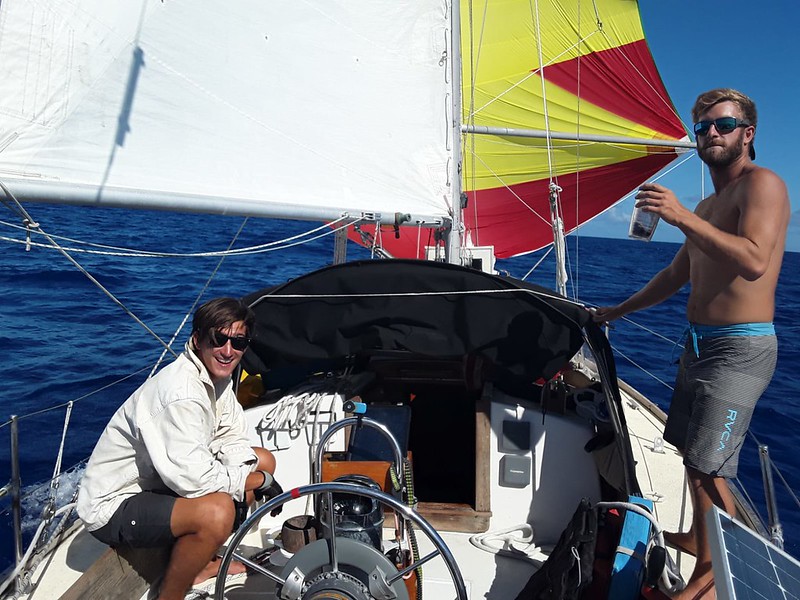 What do you do to pass the time of day?

On passage we read, write, fish (read: stare at the ocean), try new recipes (sometimes to great success, other times to great failure), watch movies (currently the full set of James Bond films from start to finish) and listen to podcasts. Often you find yourself simply thinking and staring at the ocean. Of course, that’s the usual lineup of activities if the weather is good and the winds are steady. Otherwise, we’re changing sails and trying to keep the boat moving to make miles toward our destination. Recently, we’ve been practicing celestial navigation, which takes up an impressive amount of time. Thank goodness for GPS. 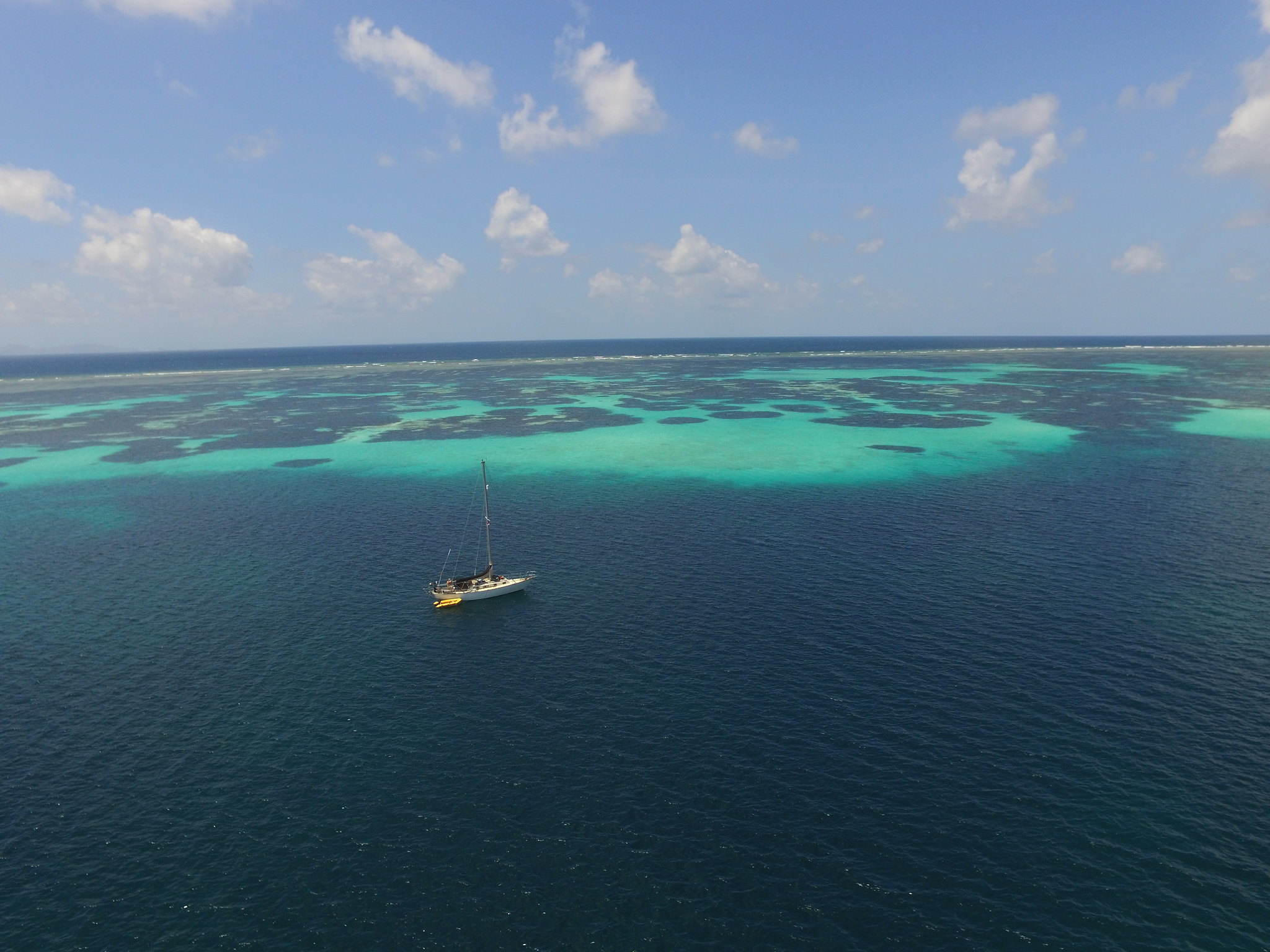 What do you eat?

We both think we eat better onboard than on land. There is no temptation for fried foods on a small rolling sailboat as anything involving boiling hot oil is at best risky and at worst dangerous (dramatically reducing Kennon’s french fry consumption). Since we get this question so often, we’re providing an honest to goodness menu of what we’ve eaten so far since leaving Saint Helena, thanks to a few Big-Eye Tuna we caught.

Admittedly the menu will lose a bit of its flair come weeks three and four after the fresh fruits and veggies have been consumed (the exceptions being potatoes, cabbage, hard squash, onions and a few others that last a good long while). After that, it’s on to getting creative with dry goods (rice, pasta, lentils, beans) and whatever magic comes out of the canned food locker. We get pretty creative however, and we’re always waiting on the next tuna, wahoo or mahi-mahi. 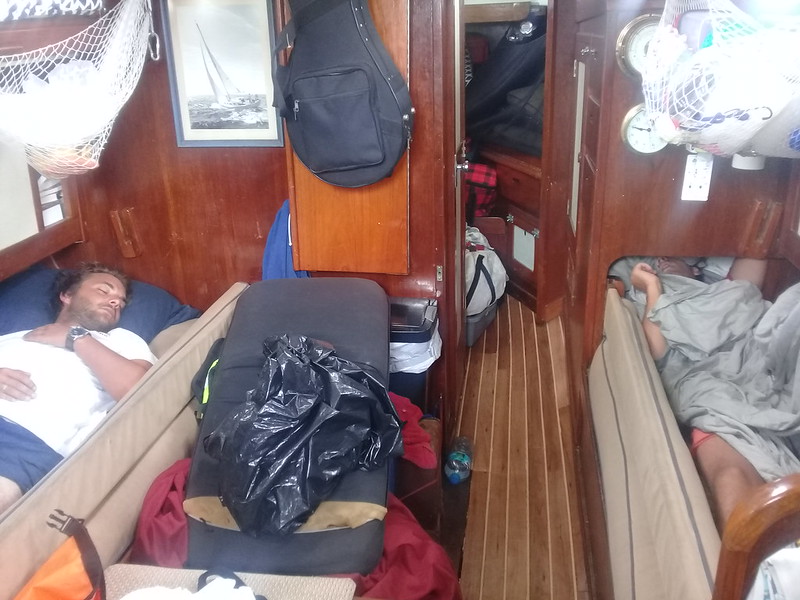 Two years ago, you talked about your fears of hitting a submerged shipping container or one of you getting sick or injured. What’s been your closest call?

There have been a handful of unpleasant weather-related moments but none (including a nice 50+ knot gale en route to New Zealand) that reached the level of possible disaster served up by the Tiputa Pass in Rangiroa, French Polynesia. The atolls in this area, though incredibly beautiful, have few narrow passes into the lagoons, with notoriously strong and unpredictable current and tides. The region, now known as the Tuamotus, but previously called “the Dangerous Archipelago,” was more commonly passed at a safe distance than it was visited by cruising sailboats in the days prior to GPS.

When we arrived close to the Tiputa Pass, we radioed the dive shop we planned to dive with to verify if our calculations for when to go through the pass were correct. They responded that due to stronger than normal trade winds over the last week, the tide had been going out for the last four days and was expected to continue going out for at least another day, and that we might as well throw our tide books and calculations overboard. When we asked if sailboats had entered and exited the atoll that day the response back was affirmative, so after taking a drive by to assess the conditions we decided to go for it.

Before long we found ourselves in the middle of the pass with steep, static, often breaking waves ahead of and astern of the boat. We would launch down a wave clear into the back of the wave ahead, only to be pulled back into the trough by the current, then back onto the face of the initial wave to go surfing again. Rinse, repeat. We would gain 20 yards, then lose 20 yards, advancing only inches on the shoreline, all under sail with the engine running full throttle. Out of context this might sound fun, but when you are surfing your house and a 20 degree turn at the wheel would send the boat sideways to get rolled as if it were in a washing machine, it is pretty distressing.

The only choice left us was to stick it out, completely unwavering in our course for fear of flipping the boat or striking the reefs on each side, and eventually, after packing on even more sail, the inches of progress added up. After nearly an hour, we made it safely into the lagoon. It took one hour of white knuckling to clear a half a mile. And there’s your obligatory sea story.

Kennon: Another tough one. From dolphins swimming next to the boat at night in phosphorescence, to seeing the Southern Cross for the first time, to seeing my first green flash (it does exist, no matter what Eric says). I’ve been fortunate to have some amazing experiences over the last two years.

If I had to pick one though, I’d have to say night diving on the wreck of the SS Coolidge in Santo, Vanuatu. The Coolidge is one of the largest, accessible and intact wreck dives in the world. I’ll never forget the feeling of being suspended in animation 60 feet down, floating along between the decks of this enormous ship while thousands of flashlight fish with their eerie green glow provided just enough light to dive without an underwater torch/flashlight. Scariest would be being at the helm during the aforementioned Tiputa Pass in Rangiroa, French Polynesia, episode trying to keep from wrecking the boat and/or injuring those aboard.

"It’s a beautiful way to see the world. Don’t just say 'one day' — actually pick one on the calendar and work toward it."

Eric: Speaking more generally, I think the coolest experiences for me almost invariably arise from getting to know the people in a given place and being open to their invitations of hospitality. The curiosity and goodwill of man is pretty universal, and it can be hard to think of yourself as a unique guest rather than a burden. Finding the correct balance and returning the favor can be delicate, but the perspective into the lives and culture of others is always worth it. The scariest thing I’ve experienced was being (temporarily) abandoned on a night dive in the wreck of the SS Coolidge. 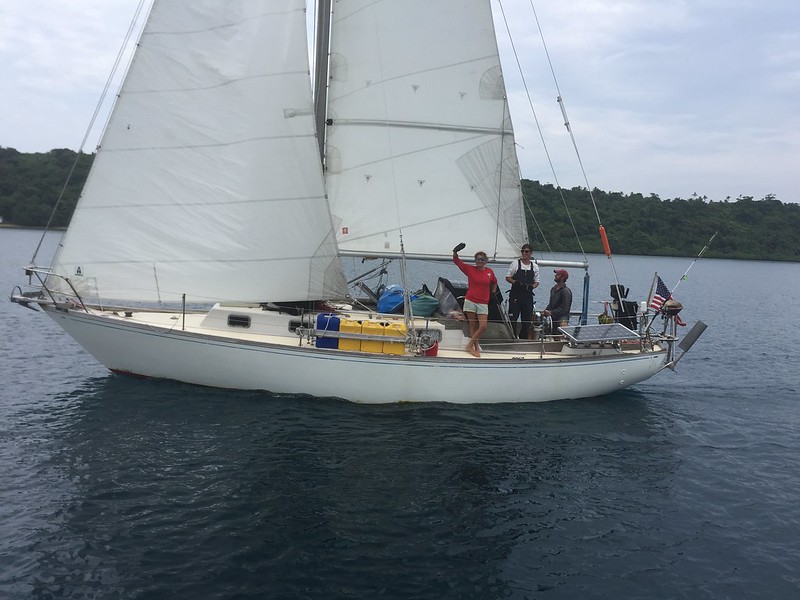 Any advice for others wanting to sail around the world?

It’s an old saw in the sailing world but that’s because it’s true — go simple, go small, go now. You’ll never be 100% ready, but if it is truly something you want to do, start saving, start planning, start sailing (if you haven’t already) and commit. It’s a beautiful way to see the world. Don’t just say “one day” — actually pick one on the calendar and work toward it. We’re more than happy to talk to anyone who is thinking about “untying the lines” as they say. 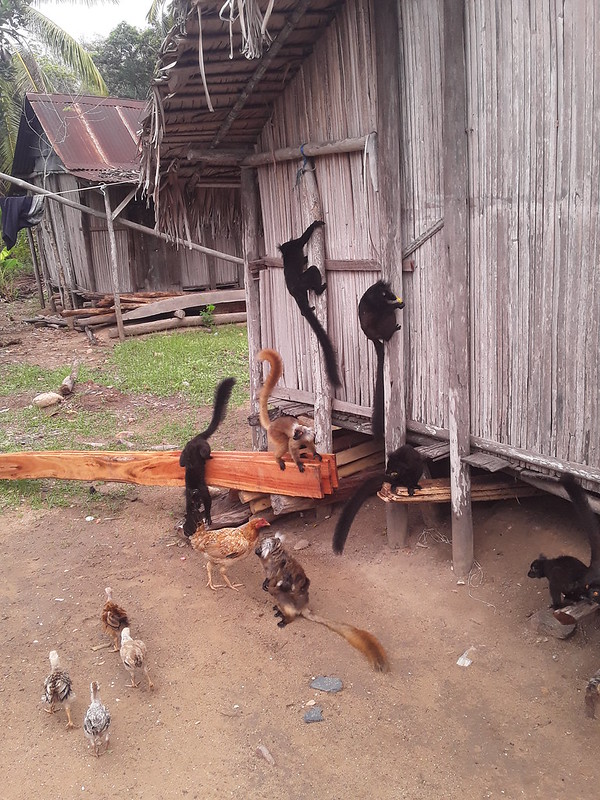 When you return home, do you plan to A) Appear on “Survivor” or “The Bachelor” or B) Get a job?

Kennon: If they have a “Survivor: Water World Edition,” I’m in. Barring that, it’s an open question. I struggle between the desire to want to keep sailing or perhaps working in the sailing industry to missing my previous day job — well, perhaps just having a “normal” job and being close by to friends and family. For the immediate future, I’ll keep living on Temujin for some or all of the summer. I’d love to do some sailing in New England, especially Maine. Depends to a degree on what the world looks like over the next two months. I’m definitely going on a second circumnavigation at some point though. There’s just so much to see.

Eric: I have a beautiful, smart and above all very patient fiancé, Lauren Leifeste (’10), who would probably take exception to my being on “The Bachelor,” and my bank account is astonishingly low, so all signs point to “job” for me. Having previously worked on the sales and distribution side of the wine industry, I was fortunate to be able to see some of the production side working in wineries in Otago, New Zealand, and Constantia, South Africa, while we were there. I look forward to applying this experience upon return to terra firma. Lauren is currently an expat living in Bangkok, so if anyone reading this has wine contacts in Thailand, please get in touch! 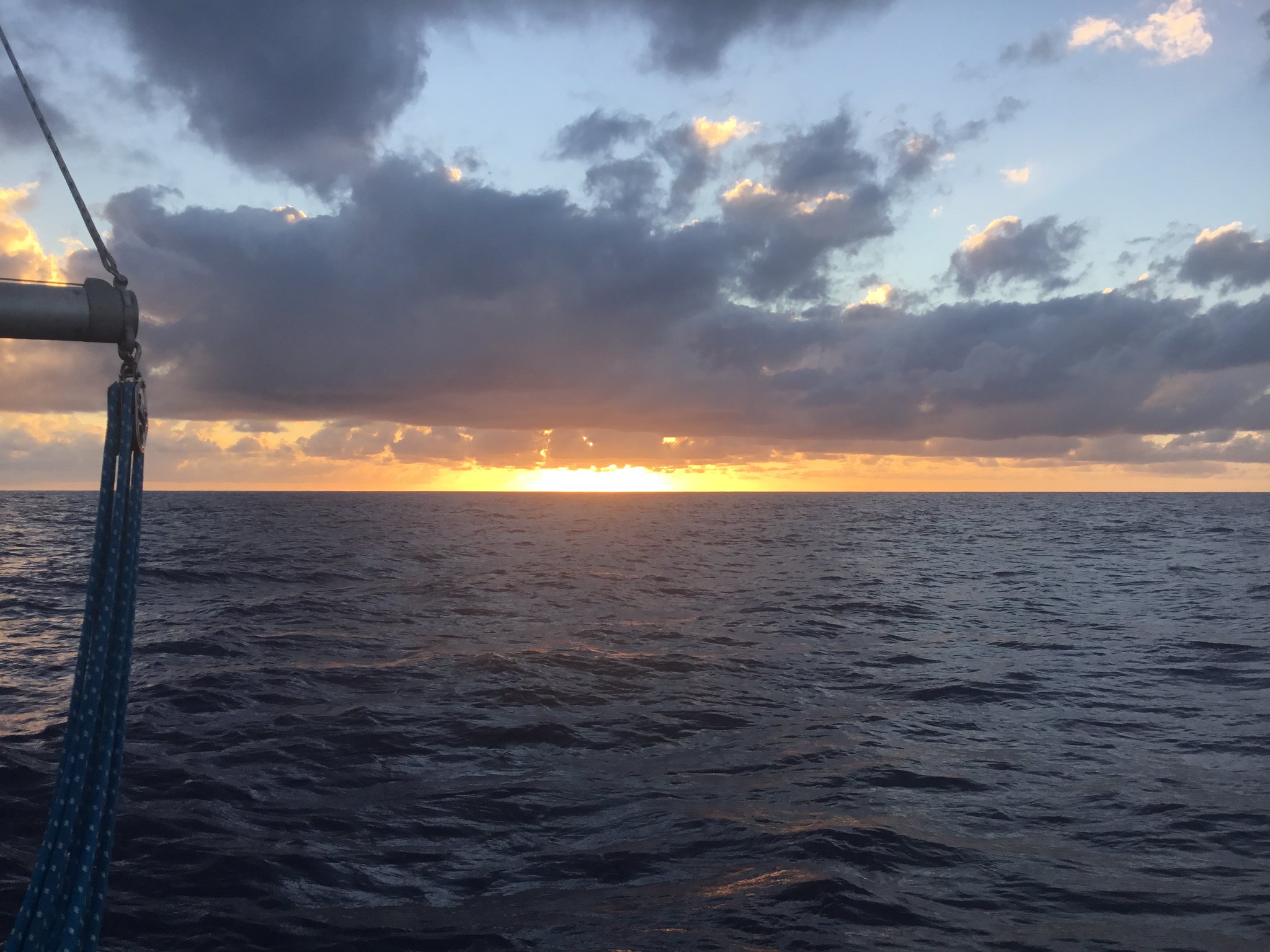