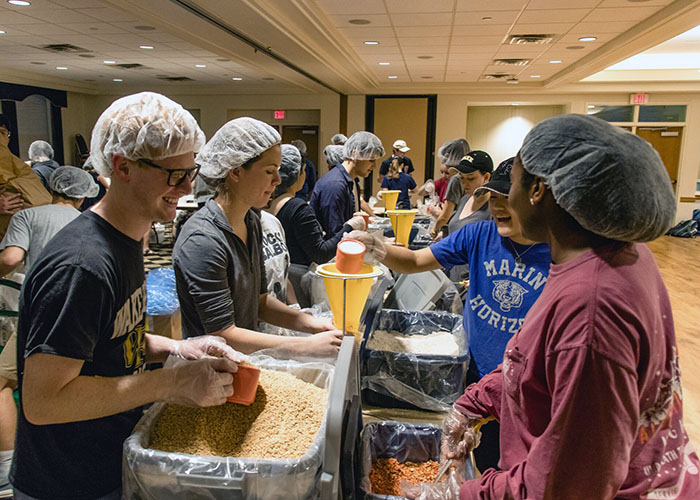 Every few minutes, the strike of a gong sends echoes through Benson University Center, followed by a burst of cheers. The sounds are coming from Benson 401, where more than 100 students, wearing hairnets and joyful expressions, are packaging boxes of food.

The students, members of the Wake Forest chapter of Alpha Phi Omega (APO), a national service fraternity, and other volunteers rolled up their sleeves to package more than 20,000 meals for Rise Against Hunger, a North Carolina-based organization that seeks to end world hunger.

Each time they packaged 1,000 meals, they rang the gong to celebrate. Rise Against Hunger is one of APO’s loudest events, impossible to ignore as the gong chimes. APO also is characterized by hundreds more quiet moments of selflessness by 150 individuals in the coed fraternity — moments that extol Pro Humanitate.

On Saturdays, when most students are just waking up for pancakes in the Pit, APO members are returning from Wake Saturdays, where they deliver food downtown. On weeknights, APO members fan out across the city, working at diaper banks, tutoring children at Latino Community Services, cooking for a Campus Kitchen shift or volunteering at The Shalom Project, a nonprofit that offers programs to end the cycle of poverty.

APO founded its Kappa Theta chapter, then a small all-male group, at Wake Forest in 1952. APO still calls itself a fraternity and its members brothers, though it accepts anyone who completes the requirements during the recruitment period. Since the national establishment of the fraternity in 1925, its three pillars have remained the same: leadership, friendship and service. 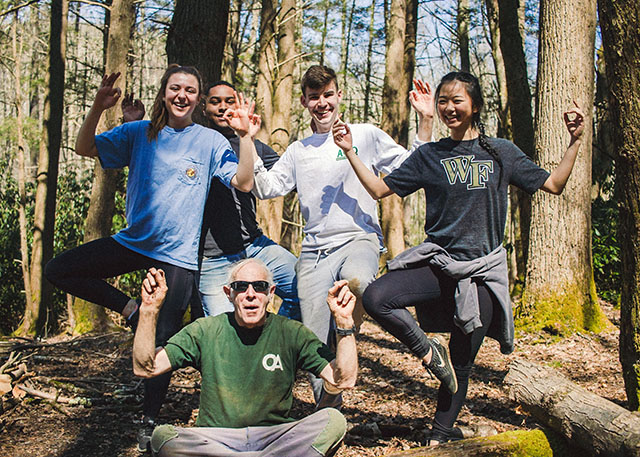 APO members take a moment to smile after doing maintenance work on the Appalachian Trail.

Christian Estrada (’22) grew up living with and helping his great grandparents. His heart for service was born then. As a teenager, he volunteered at the local animal shelter and served in his school’s Red Cross club. When he came to Wake Forest, he fell in love with APO.

One of his first experiences with APO was a Habitat for Humanity house build. Christian remembers being moved as he helped construct the home alongside the future homeowner.

Shelby Ellis (’20) loves that members of APO are so like-minded, yet so different. “They challenge me to change my beliefs or views on things,” Shelby says, and she learns “from their personal experience to broaden my idea of what is important in life.”

For Ben, APO has been full of those connections both on and off campus. He participates in weekly Campus Kitchen visits to deliver food to the Azalea Terrace Senior Apartments in Winston-Salem. Ben has befriended one of the residents, Ms. Vicki, as students call her. Ms. Vicki often gives students nicknames, based on their majors, and offers bits of life advice. Ben credits APO with helping him develop the confidence and skills to lead more than 100 people. 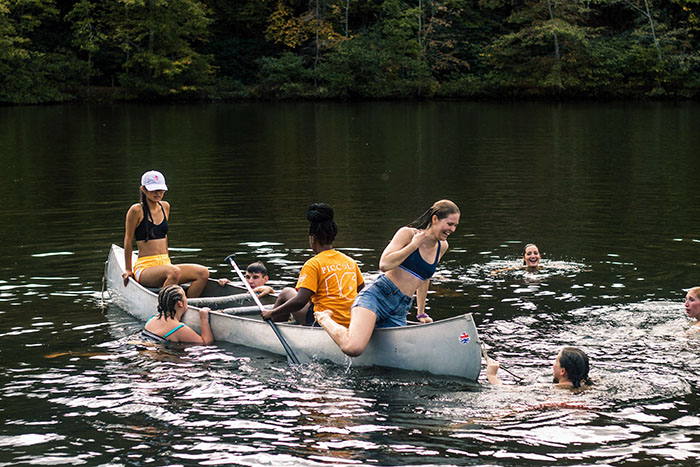 Former president Joe Julian (’20) says the leadership skills he developed in APO will help him when he becomes a dentist, where communication and decision-making skills are crucial.

“So many of us have gained leadership abilities that we wouldn’t have had if it weren’t for APO,” says Shelby, who hopes to translate the skills she has learned in APO to a career in nonprofit fundraising. As the APO alumni relations chair, she keeps a record of alumni and helps current students connect to them.

Professor of Counseling Sam Gladding (’67, MAEd ’71, P ’07, ’09) was in APO as a student and is now an adviser. “I think all of us who attend Wake Forest are privileged in some ways. Some more intellectually, some more financially, some just with special talents — music or writing,” he says. “When you’re given privilege or opportunities, you should always give back.”

Gladding remembers when he and his fraternity brothers spent several hours cutting the unruly lawn of a widow who was unable to do it herself. He also remembers participating in food drives, volunteering with the Samaritan Inn and tutoring children.

Old books in the APO lounge behind Luter Residence Hall tell the stories of APO’s good works on campus over the years: Brothers pushed to install trash cans to reduce litter, created the first campus phone directory and hosted a radio show to talk about campus news.

APO has four perspectives that define its mission: service to brotherhood, to campus, to community and to nation. Over the years, APO’s reach has stretched toward the community and to the nation; more students have cars on campus, and the internet allows impact without the consideration of distance.

Yet, members of APO realize that its strongest impact may be on other students. Joe emphasizes that APO helps make other students on campus aware of ways they can serve. Christian says he hopes APO’s work sparks the desire in others to serves. Or, as Gladding puts it, the members of APO are “inspiring in what they do, and I’m inspired by them to try to be as good as I think they are.”

If you glance at the Wake Forest seal, two elements stand out: the motto, “Pro Humanitate,” and two Greek letters bookending the Chi Rho symbol: Alpha and Omega. Pro Humanitate is widely defined as “for humanity.” Alpha and Omega mean “the beginning and the end.” For members of Alpha Phi Omega, it begins and ends with service. 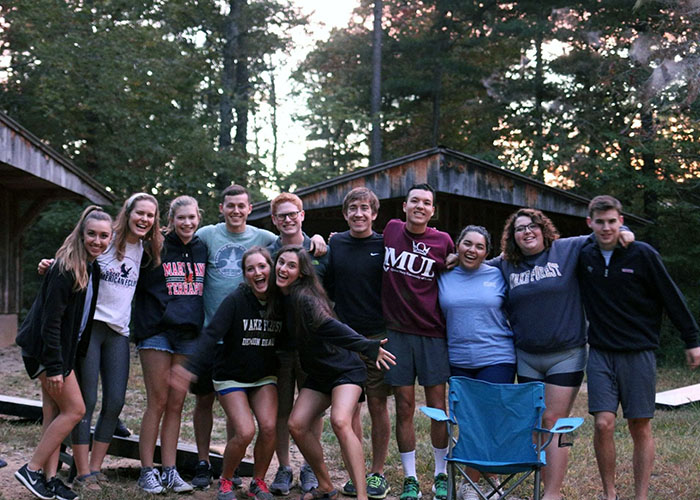