The New York Times recently wrote that “demand for food assistance is rising at an extraordinary rate just as the nation’s food banks are being struck by shortages of both donated food and volunteer workers.” How has demand increased at food banks in the Carolinas?

It was a perfect storm — an increase in demand, a drying up of the food supply and a loss of volunteers. Virtually overnight in March our demand went up, 50% to 60%, some (food banks) up to a 100% increase. As everything started shutting down, especially in the hospitality industry, many of those people were getting furloughed or laid off, and they turned to the food banks for help.

We’re used to disasters, hurricanes, for example. But, of course, this is totally different. With a hurricane, it hits one area and then it’s gone. You can think of this as a nationwide hurricane that hit every county (in North and South Carolina) and every state for five months now. It gives you a picture of what we’re dealing with because we can’t expect support from other areas because we’re all in the same boat.

How did this affect your volunteers?

Our volunteers tend to be older. And so almost instantly, again, our volunteers dried up because they were doing what they needed to do and staying home. We also had to reengineer how we use volunteers because of social distancing. We couldn’t use as many volunteers because we couldn’t put them in the same space. We even had to start thinking about how we use staff. We can’t have all our staff together in the warehouse because if one person tests positive, then we’re shut down. So that was a double whammy, losing volunteers and then trying to figure out how we can safely utilize them. The National Guard (deployed to work in food banks) were a godsend. 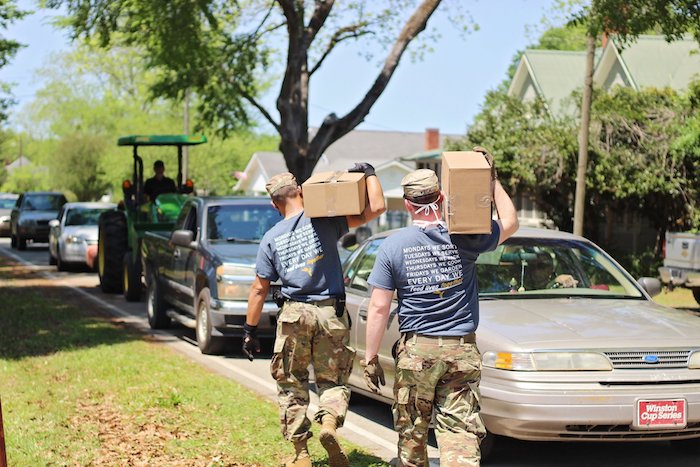 How were food donations affected?

Before COVID, our food banks averaged spending about $80,000 a month on shelf-stable food, canned goods, for example. The vast majority of what food banks use is donated from individuals or through food drives or from retailers who donate truckloads of food in normal times. All that was gone. We went from purchasing about $80,000 a month to purchasing close to three-quarters of a million dollars a month on average. And the lead times to get shelf-stable food went from a week to six to eight weeks out. Cash flow became the most important need. Feeding the Carolinas immediately focused on getting that message out and getting significant donations from many public and private donors.

What kinds of stories do you hear from the food banks on the front lines?

Gratitude. People crying and wanting to hug you, but they can’t. People ask, “I came to get food, but what can I do to volunteer? Can I pay it back? Can I help?” Then you’ll see things like kids doing a little fundraiser, and they bring in their jar of change, and that really touches you. And the phone calls: “How can I help? What can I do?” 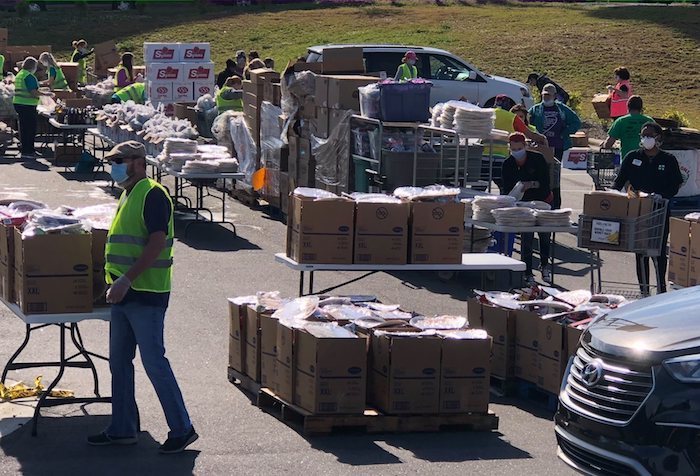 Is your current model sustainable?

The alternative is people don’t eat. Early on, it was go, go, go. We couldn’t keep doing that forever. Now it’s settled down a little bit. You focus on what you have to do and you keep pushing through. From a policy perspective, anything that helps feed more people, we’re in favor of, (such as) increasing SNAP (the federal Supplemental Nutrition Assistance Program or food stamps) benefits or allowing SNAP to be used for online purchases. We really need to take a hard look at all the different policies we have on food assistance.

Feeding America has been fantastic, raising money and lobbying for changes with food stamps. But since this is nationwide, they can’t pour resources into our area. Every single area, every single county was affected. It was a bit overwhelming at first. And then we said, “This is what we do. We feed the Carolinas, let’s get busy, and let’s take care of today. Let’s take care of tomorrow.”

This volume for the food banks is going to be here for a while. It’s forced us to think about how we do things because of changes like mobile distributions, no-contact distribution, where people drive through, we drop it (a food box) in the trunk of their car and off they go, versus having an area set up where people can come and shop and pick what they want. It’s going to change a lot of things like that. 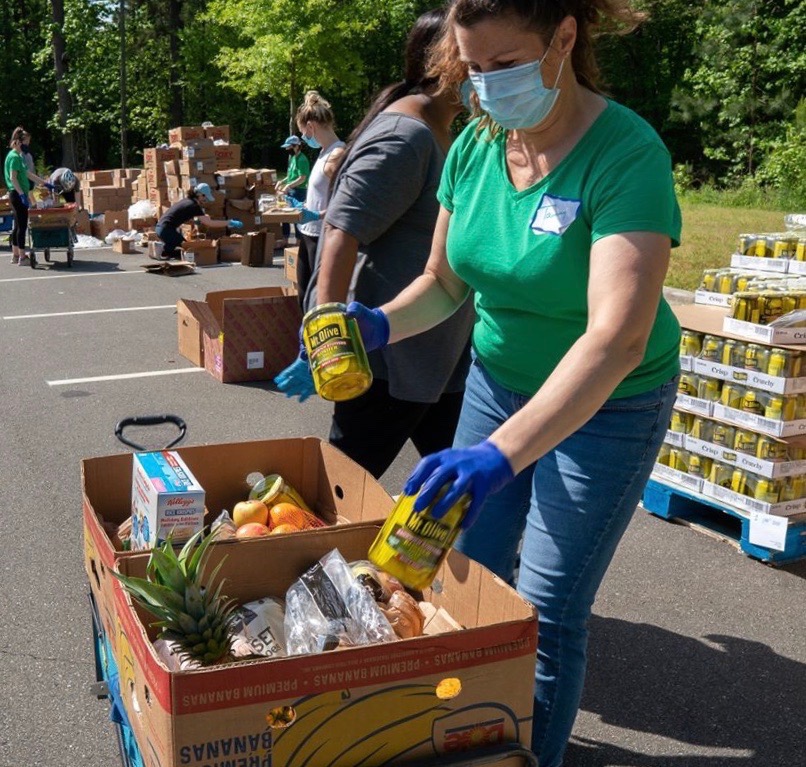 We have figured out how to use volunteers, so that has improved some. You still see shortages (of food), so we’re still struggling with that. The (federal) Emergency Food Assistance Program is cranking out tons of food. But how do you deal with that logistically? How can our partner agencies absorb that? There’s transportation, there’s staffing, there’s all kinds of things. But there’s hope on the horizon for (food) products. Until people get back to work and the economy is totally open, we’re going to feel that (need for food assistance) for a while.

One thing that has been a blessing is we have had an abundance of fresh produce. When you shut down hotels and restaurants, suddenly there’s no outlet for the produce that they use. And we’re in a produce-rich area in the Carolinas. The excess that we don’t use goes across the Southeast and across the nation through Feeding America. The challenge there has been transportation and capacity. A lot of our food banks have stepped up and gone direct, rolling out a mobile pantry to get the produce out there. But you still need shelf-stable food to balance that out.

Have your donations increased the last few months?

Absolutely. The Duke Endowment made a huge gift, $3.5 million. The State Employees Credit Union Foundation stepped up big time (with a $2 million gift). In five weeks, we raised $14 million that we pushed out to food banks. We received $6 million from the North Carolina legislature. Every year, law firms and law schools — and Wake Forest is a part of this — do what’s called the Legal Feeding Frenzy, a friendly competition to raise food and funds that runs in March. We typically raise about $60,000. (This year) it exploded and raised $130,000.

What keeps you motivated?

I’ve been blessed with experiences and education that have put me in a place where God wants me to be at this time. That’s a wonderful, wonderful feeling. You get that phone call from an individual who says, “I’m out of work right now, but I want to give $100.” Then the Duke Endowment calls and gives $3.5 million. And all the calls in between. I’ve always been one to want to give back and make a difference. It’s frustrating, it’s tiring, it’s all of that, but it’s also so gratifying to know that we’re feeding people who literally have no food. It’s gratifying to be able to say, “Look what we’re doing together. We’re making a difference for the Carolinas.”

What can Wake Foresters do to help?

There’s a history of Demon Deacons supporting food banks in all kinds of ways. We still need volunteers, if you’re comfortable doing that. We still need money to purchase food. Through Feeding the Carolinas, you can search for a food bank and you can donate or volunteer. Demon Deacons have always been big on giving back, and I know they will in the future. 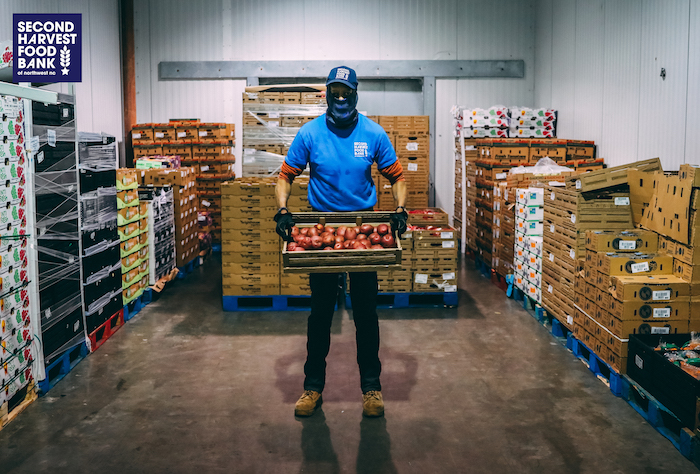