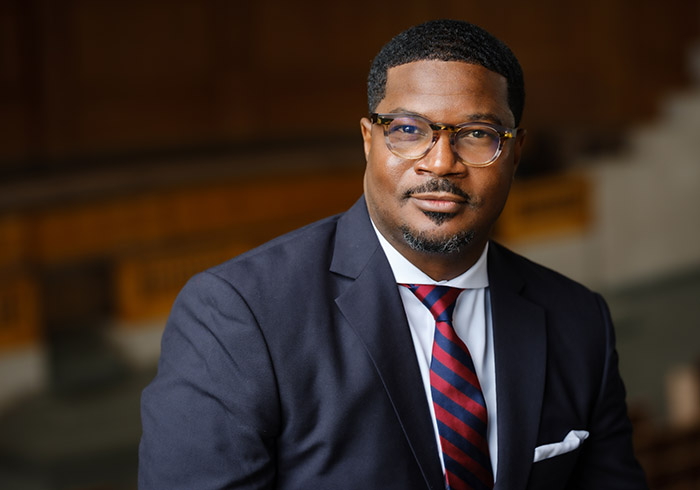 L ast year, Jonathan L. Walton (D.D. ’15) became dean of the School of Divinity, Presidential Chair of Religion and Society and dean of Wait Chapel. A native of Atlanta, the social ethicist and author has degrees from Morehouse College and Princeton Theological Seminary and an honorary doctorate from Wake Forest, bestowed during Commencement 2015 when Walton was the Baccalaureate speaker.

He arrived from Harvard University, where he was the Plummer Professor of Christian Morals and Pusey Minister in Harvard’s Memorial Church. Because he was on sabbatical in his first months in North Carolina, he started his job on campus in January, having only two months in his day-to-day role before Wake Forest moved to remote working in response to COVID-19.

Maria Henson (’82) of Wake Forest Magazine spoke with the Rev. Walton about his background and his views of the times. 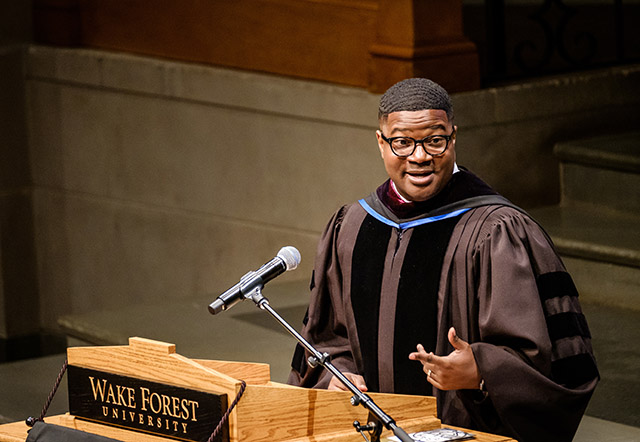 MARIA HENSON:  You were impressive when I first saw you in action at Harvard Memorial Church a few years ago at a conference. Why did you decide to leave the role of esteemed preacher in that historic church to come to Wake Forest?

JONATHAN WALTON:  I went to Harvard Divinity School not to assume the head of the Memorial Church but to be a member of the divinity school faculty. And it was there that this wonderful opportunity presented itself for me to lead the Memorial Church. And it was a beautiful time, and I learned so much and met so many incredible people during that time. Yet when the opportunity presented itself to not only return to theological education full time, but also to become dean of a university-based divinity school, it was something that I had to take seriously.

Secondly, I am a Southerner by birth and by choice. And while I loved the beautiful foliage and temperate springs of New England, many of the moral issues that I care most about — the students are on the front lines of many of these battles, whether it’s issues of racial or gender justice, the role of faith in matters of community health and economic empowerment and also helping to stem the tide of resurging xenophobia, bias and bigotry in our society. These are not academic exercises for students at Wake Forest University School of Divinity, but rather these are life-and-death pressing opportunities. So, when given the opportunity to join in the fight in my home region, it was something that I could not turn down. I felt the call to come. 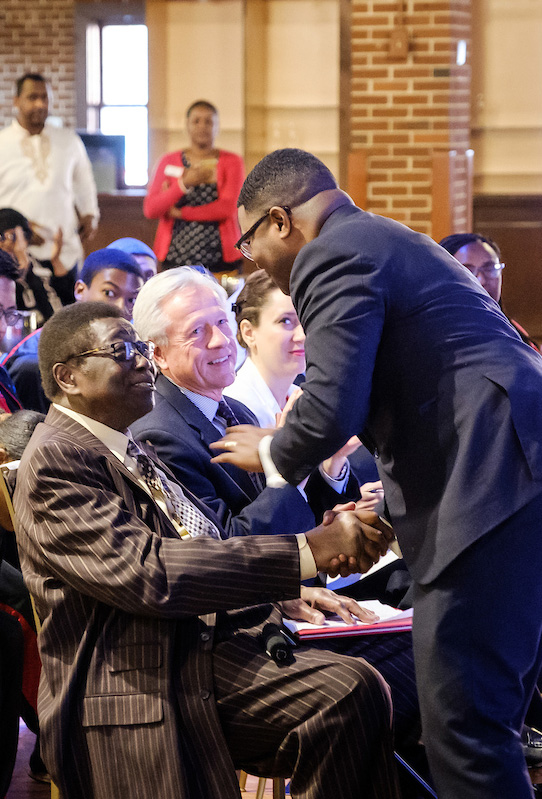 MH:  I’ve been captivated lately by six-word memoirs. I won’t ask you to describe yourself in six words, but tell us about yourself.

JW:  Anybody who receives a piece of correspondence from me, whether it’s an email or a letter, they will know that I sign off with “One Luv.” And that’s One L-u-v. I spell it L-u-v just because I kind of view myself as a Southern hip-hop cat who has a little bit of flair. No other reason other than that. But One Luv is not referring to a Bob Marley song or a Carnival cruise. … It’s from the words of Benjamin Elijah Mays, the great preacher and educator, who said, “The love of God and the love of humanity are one love.”

How can we say that we love a God whom we’ve never seen and not express and live out that love to and with one another who we walk beside every day? One Luv serves as this guiding principle, this overarching moral framework that we are brothers and sisters and siblings under the parenthood of almighty God. That’s why I often refer to people as Brother John or Sister Jane or Sibling Dylan, because I’m affirming the spiritual human connection that we share before I think about any of the varying social categories that might divide us.

MH:  You’ve also described yourself as a post-civil-rights kid. Tell me about that.

JW:  My parents and grandparents were civil rights activists in their own rights. … And they fought — and fought valiantly and courageously — to provide expanded opportunities for me and other members of my generation. And you can believe growing up, they never let us forget that. But I also know that my generation also realizes that injustice is a many-headed hydra. If you cut off one head, injustice can grow back in another form. And so, similar to the ways that slavery gave birth to segregation, the defeat of segregation in American society gave birth to other unjust realities that previous generations did not give as much credence to.

We know that gender injustice, the rise of the prison-industrial complex, fighting for expanded opportunities for LGBTQ rights, these are all things that my generation had to take up. A generation that may not have known white- and colored-only signs, but we did know the exclusion of people because of their gender; an intolerance for people because of who they fell in love with; incapacity toward grace, which takes the form of the prison-industrial complex. And so, that’s what it means for me to be a member of the post-civil-rights generation. Somebody who is called. We are called to build upon and move beyond the struggles and victories of previous generations and extend those toward … increased opportunities for all of God’s children.

“That’s what it means for me to be a member of the post-civil-rights generation. Somebody who is called.”

MH:  You arrived at Wake Forest as the University is grappling with its past. This year President Hatch apologized for the University’s participating in and benefiting from the institution of slavery. What strikes you about this kind of accountability? And while you’re new at Wake Forest, you’re not new to the issue. I’m interested in how you’re looking at that and how you can help alumni think about that.

JW:  I’m very proud of what the University is doing. When we think of the past, particularly aspects of our past of which we’re ashamed, there are two birds that come to mind. You can either be an ostrich that sticks its head in the sand, or you can be the West African bird that is symbolized in the phrase “Sankofa,” (which) literally means, “Go back and get it.” The image of the bird is its neck reaching back to its tail.

The principle of Sankofa teaches us that the best way forward sometimes is back through. And so, if we as a University, just like we as a society, are going to progress in authenticity and honesty, there are always aspects of our past that we have to own up to lest we make the same mistakes again. It’s a matter of, in theological terms, keeping our sins ever before us so that we realize that even though we’ve come a long way, at any moment we still have to own that we are fragile, tragic creatures that are able to give in to our most base sensibilities.

The best way to repeat the past is to eradicate the past. And so, I appreciate President Hatch, (Trustees Chair) Gerald Roach (’80, JD ’82, P ’09, ’12) and members of the board of trustees for their moral courage and conviction at this time. And I appreciate the work and the labor of (Associate Provost for Academic Initiatives) Kami Chavis and other members of The Slavery, Race and Memory Project, who undertook the heavy lifting and heartbreaking work to tell a story that cuts deeply for many of us. 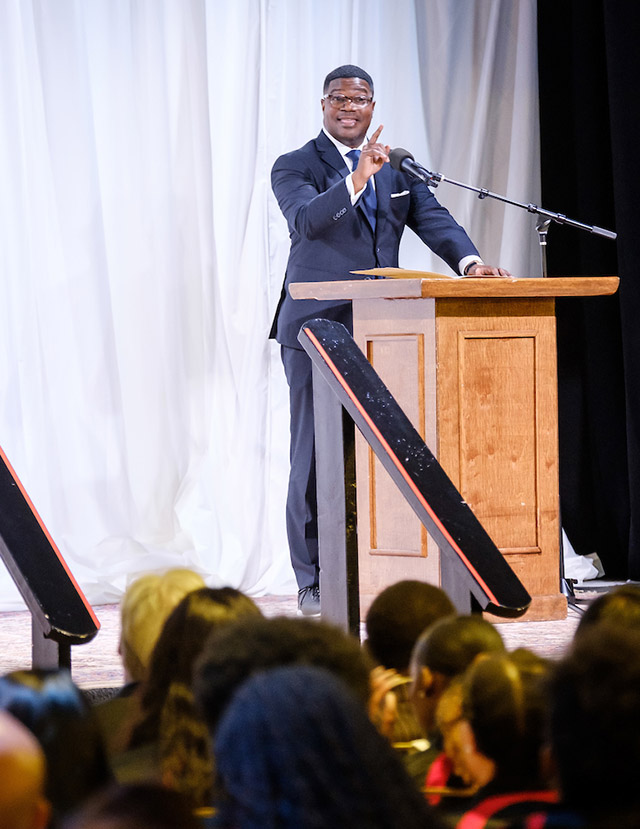 MH:  Where do we go from here?

JW:  Got to be willing to be a truth teller. … Because we can either participate in a sort of willful ignorance and amnesia, or we can bear witness to the truth and allow the truth to lead us.

MH:  As we speak today not in person but during lockdown in our homes, the world is grappling with COVID-19 and a time of suffering. What can you tell people about such times?

JW:  Moments of mass suffering reveal the folly of our claims to autonomy. Moments of mass suffering unveil the myth of our rugged individuality. No man, no woman is an island. And these moments reveal to us how interdependent we are, how much we need one another. And so, it’s the spreading of misinformation … that seeks to continue to pit person versus person, group versus group. And if anything, COVID has demonstrated that that is unsustainable, it’s morally untenable and it is a recipe for mass extinction.

Right now, we’re bearing witness to the truth of one another’s precious humanity. All lives are precious. We should never take any for granted, and it should also remind us that in moments of crisis how we construct our society during the quote unquote times and periods of prosperity tells us something about what shape it’s going to take during periods of crisis.

This moment lays bare the gross economic, social and cultural inequality that was already present. COVID has just opened the curtain. …

That’s how I understand our call at Wake Divinity, our mission — promoting justice, compassion and reconciliation. Justice toward the least of these, compassion toward those who exist in the shadows of life. And reconciling us all to one another, because suffering is the great common denominator. And if we can learn to identify with one another there, then we can also learn to assist and aid one another. That’s what I believe our role is at the divinity school.

EDITOR’S NOTE: This conversation occurred before the May 25 death of George Floyd, a 46-year-old Black man who was killed in police custody during his arrest in Minneapolis. His death triggered protests against police brutality nationwide. “Today our nation is in chaos,” Walton wrote to the divinity school community on June 4. “Protests and uprisings coupled with an international pandemic. Both reveal acute vulnerabilities among communities of color — manifestations of the pain and misery baked into this nation’s noble yet fragile experiment of democracy.” Read his full message at bit.ly/2DynB8J

Walton, left, chats with a first-year student and family this fall.