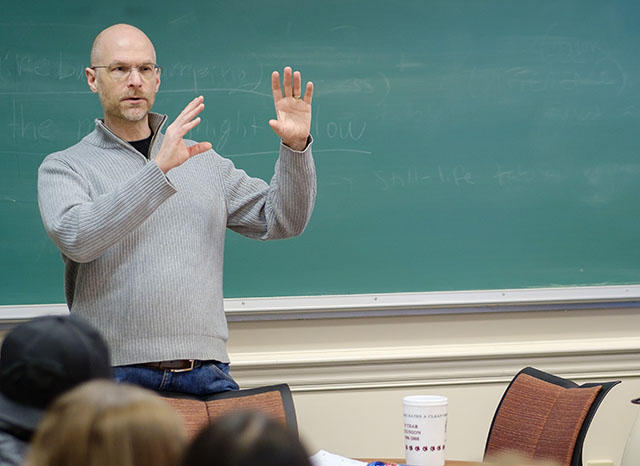 Philosophy Professor Adrian Bardon spends a lot of time thinking about time. What is it? How do we perceive it? Why does our experience of the ticking of the clock vary so much?

And there’s no time like now to consider such questions, as many have felt the pandemic distorting their perception of the calendar.

Bardon teaches courses on the philosophy of space and time, among others, and wrote “A Brief History of the Philosophy of Time” (Oxford University Press, 2013). He co-edited or edited three other books on time.

Wake Forest Magazine’s Carol Hanner talked with Bardon about time in today’s topsy-turvy world. The excerpts have been condensed and edited for clarity.

What drew you to the study of time? 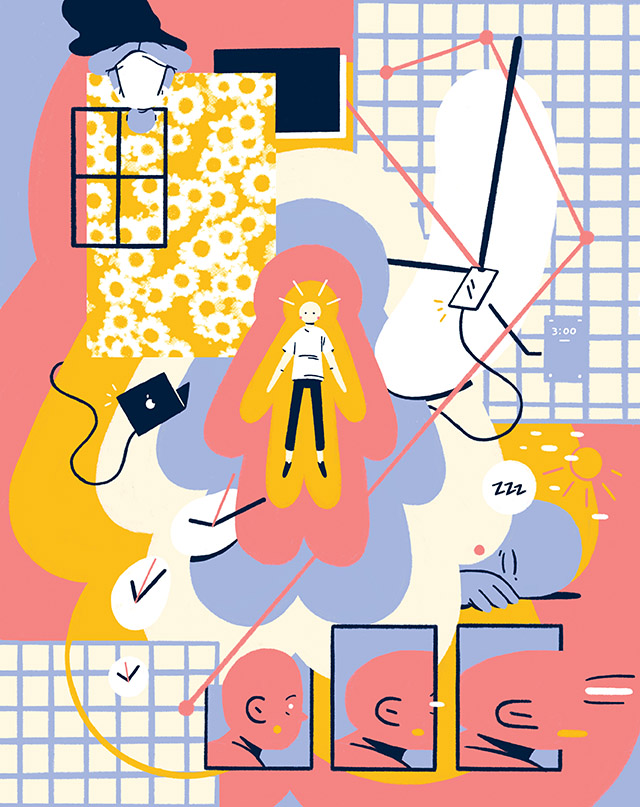 Time is just the most fundamental aspect of our existence. You could say something like, “Well, it’s like water to a fish or the air we breathe,” but neither of those analogies really begins to capture how fundamental time is to us, and that appealed to me.

Why has our sense of time felt so warped in the pandemic for those at home? Time seemed to pass so slowly in March, then sped up in later months.

We have all these different brain systems that affect our subjective perception of time. We have to synchronize our visual and auditory modalities, and the brain has to put those together in some kind of coherent picture of the rate and order of events outside in the world. We have our circadian rhythms, which tell us when to go to sleep and when to wake up, responding to things like light levels. Anyone who has jet lag knows how those things can get disoriented.

We have to integrate memory into our cognition and planning. We have to switch attention from one thing to another, and sometimes we want to narrow our attention to some goal. We also know that the emotional context has a big effect. If you’re watching a boring movie, time is dragging along. Just keeping track of what time it is and what day it is has to do with social interaction. You go to work five days a week and always before work you drop by Starbucks first. On the weekend you see your grandparents. Those are all things that are helping orient you in time.

An ER doctor in the middle of an ICU in New York City is having a very different kind of day, so we’re talking about people in quarantine. There’s anxiety if you’re out of your routine. You’re surrounded by distractions, especially if you have kids. Light exposure can be different.

(You’re missing) everything that would have gotten you into that outward-directed, project-accomplishing state, relaxed, with the right emotion — that’s called flow — when people say time just flies by. If you’re in flow, you’re a happy person. The pandemic situation is a flow-buster. The natural consequence of that is to enter into a different state, inward directed in a negative context, called rumination, or just called stress — that state where people say time goes slowly.

It’s a perfect storm for getting you to feel temporal disorientation.

So why did April seem to speed up?

That seems paradoxical. I’m in touch with people who research time perception all over the world, and they’re all getting the same questions about the same phenomenon, where it seems like days are dragging by, but they’re also flying by.

(Besides our judgments of how long an event feels at the time) there’s also judgments we make after the fact, and those two judgments can diverge. The month of April just whipped by because there was a lot less to remember as novel, interesting events — not how did it feel at the time, but how much did we do?

It seems a shame that time flies when you’re having fun and crawls when you’re miserable. Is there an evolutionary reason for this?

It’s really goal-oriented attention that makes time fly by. When you have a goal in mind, like, “Get food today; let’s go on a hunt,” you’ve got blinders on. That’s good. You’re tuning out all the extraneous stuff that doesn’t directly pertain to you catching your prey.

It’s a byproduct of what is advantageous to you, our ability to narrow our attention on goals that we need to accomplish. Time goes slowly when you notice a lot of stuff. When you’re being tortured, unfortunately, you’re really, really noticing what you’re feeling. So, yeah, that’s too bad. 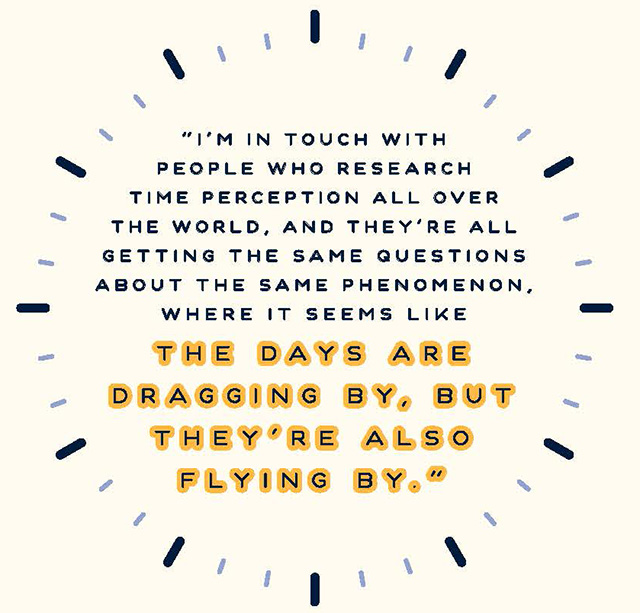 How do children’s ages affect their experience of the pandemic? You’ve said younger children seem to do a little better.

Young kids are more focused on their own little worlds and are set up to do imaginative play, so they get into that pleasant flow state pretty easily. I’ve been struck by the difference between how my children (ages 11 and 8) are handling it and my college students, who seem to be suffering emotionally a lot more.

What can reduce the negative effects for those in isolation?

Ask them to be involved and mobilize them to do things that are productive. During the German bombing campaign of London in 1940 and 1941, the British government and the medical people were anticipating riots, fleeing, neurotic episodes, but they didn’t see the mass panic they expected. There seems to be a pretty good historical consensus that the people in London had gotten mobilized. Everybody had a job to do — fire brigades, food deliveries, housing — that turned their attention out.

We need testers, and we need contact tracing in the hundreds of thousands. That would be a big start, not just in terms of addressing the pandemic in a positive way; it would be, I think, tremendously psychologically helpful to ordinary citizens.

What other tips would you offer?

A lot of the tips are just what you tell anybody who’s depressed or upset about anything — go outside, get some exercise, have positive social interactions with people. It is kind of a cliché, but helping yourself by helping others is just absolutely the scientifically based advice that I would give.

Time is a difficult, abstract concept. How can you explain it?

There’s time and what it is in itself, which is mostly prescribed by physics. And then there’s temporality, which has to do with how we live time, and that has more to do with psychology. There’s this enormous disconnect between real time and lived time.

The main takeaway that makes all of your reality drop out from under your feet is that there’s no such thing as past, present and future. Time does not pass. That sounds insane to people who haven’t thought about it at all, but it’s actually a consensus view in physics and in philosophy.

I like to compare this to color properties. Shirts aren’t blue; shirts reflect light at a certain wavelength, and our brains are so constituted that when we see it, it’s a blue kind of feeling. But no matter how much you know about light and color, when you look out in the world, you see the colors; you can’t help it.

This is how past, present and future works. It’s a projection of our psychology based on a certain set of memories and anticipations and experiences. I’m having experiences, therefore this is the present. It’s kind of like, “I’m having a blue experience, therefore I’m presented with a blue object.”

What has surprised you in your study of time?

So, despite being 100% confident as to what the standard scientific view is, it doesn’t change my experience of the world one bit. If someone I love dies, I’m not able to console myself, as Einstein supposedly did, by noting that that person’s life is just a timeless object in space/time.