In the last four years, the Program for Leadership and Character has attracted more than $15 million to fund scholarships, courses and programs, enrolled a second class of scholarship recipients, enlisted an advisory council of national leaders, expanded course offerings from the humanities to engineering, and hosted a conference on the arts and leadership, with another conference planned for this spring.

“I think people are recognizing Wake Forest now as one of the leading universities doing this work in the country and even around the world,” says Michael Lamb, executive director of the Program for Leadership and Character and an assistant professor of politics, ethics and interdisciplinary humanities. 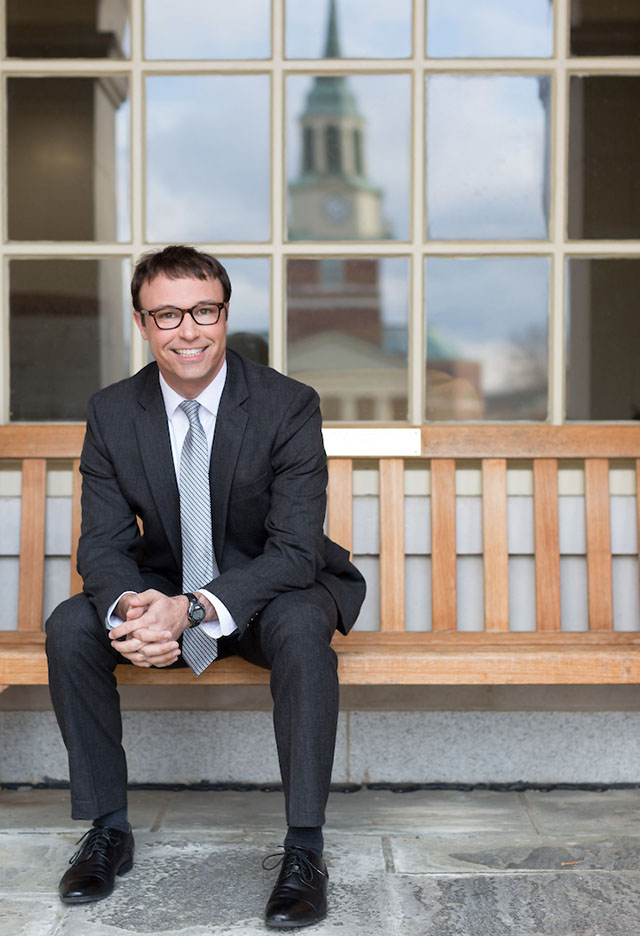 Michael Lamb has led the Program for Leadership and Character since 2017.

Lamb came to Wake Forest in 2016 and started the Program for Leadership and Character a year later. The program seeks to embed leadership, character and ethics into the campus culture, building on the University’s Pro Humanitate motto. “Our vision is to develop a program that is transformative for students and equips them to be the leaders of character that our society needs right now,” Lamb says.

Gifts from alumni, parents and foundations are fueling the program’s growth, including:

• The Lilly Endowment has given $3.4 million to support programs for students, hire new staff and postdoctoral fellows, help faculty integrate leadership and character into new or existing courses and bring distinguished speakers to campus.

• The F.M. Kirby Foundation has given $2 million to support leadership and character staff.

• The John Templeton Foundation has given $1.68 million to study the effectiveness of using role models, or moral exemplars, to shape character and behavior. Researchers from other universities in the United States, Canada, the Netherlands and the United Kingdom are also involved in the study.

• The Kern Family Foundation has committed $707,000 to incorporate an entrepreneurial mindset, virtue and character into the engineering curriculum, from introductory courses through the final capstone design course.

The University is on track to eventually award scholarships to 40 Leadership and Character Scholars, or about 10 in each class. Ten students were in the inaugural class in 2019, and 12 were selected last fall. The students have opportunities for internships, summer research projects and mentoring.

Lamb and his colleagues are working with faculty in the College and professional schools to integrate leadership and character into existing courses or design new ones and with campus life offices to expand cocurricular programs for students. Postdoctoral fellows are teaching courses on leadership and character in the School of Divinity, Center for Entrepreneurship, Interdisciplinary Humanities Program and the computer science department, with more to come.

“Our vision is to develop a program that transforms students and helps them think about how to lead in different contexts and communities.”  Michael Lamb

In the last year, Lamb has assembled an advisory council that includes Wake Forest alumni and parents, as well as nationally known leaders, including David Brooks, New York Times columnist and author of “The Road to Character;” Angela Duckworth, founder of Character Lab and MacArthur “Genius” award winner; Eboo Patel, founder of the Interfaith Youth Core; Daniel Porterfield, president and CEO of the Aspen Institute; former Secretary of State Condoleezza Rice; and Krista Tippett, author and host of the “On Being” public radio program.

The success of a 2019 conference, “The Arts of Leading: Perspectives from The Humanities and Liberal Arts,” is leading to a second, virtual, conference, “Character and the Professions,” March 18-20. Prominent leaders in business, divinity, law, medicine, public life and engineering and technology will discuss the importance of character in their professions. The conference is open to the public. Register at bit.ly/2JFC1qY

Wake Forest was the only university included in a recent book, “The Fabric of Character: A Wise Giver’s Guide to Supporting Social and Moral Renewal,” by Anne Snyder in a chapter on how the Program for Leadership and Character is translating research into forming future leaders. Snyder’s book also recognizes the ongoing research on character by Wake Forest psychology professors Will Fleeson, Mike Furr and Eranda Jayawickreme, as well as philosophy professor Christian Miller.

“Our vision is to develop a program that transforms students and helps them think about how to lead in different contexts and communities,” Lamb says. “We hope to become a resource for other colleges and universities and help their faculty and staff learn how to integrate leadership and character into their classes and programs. We aspire to be a model for this kind of work across the country.”

See more about Wake Forest’s focus on leadership and character in the fall 2019 Wake Forest Magazine and at leadershipandcharacter.wfu.edu