As women move into their second century of voting rights, Wake Forest Magazine offers a series of milestones along with the millstones in the story of women at the University since the founding in 1834 as a manual labor institute for men.

It took more than a century after Sarah “Sally” Merriam Wait helped her husband, Samuel, establish Wake Forest before women were accepted as undergraduates. Today, Michele Gillespie is dean of the College, and women account for half the 28 department chairs. Jane A. Aiken is dean of the law school, and Michelle Roehm became interim dean of the business school recently. Dr. Julie Ann Freischlag is CEO of Wake Forest Baptist Health, the first female dean of the medical school and chief academic officer of Atrium Health. 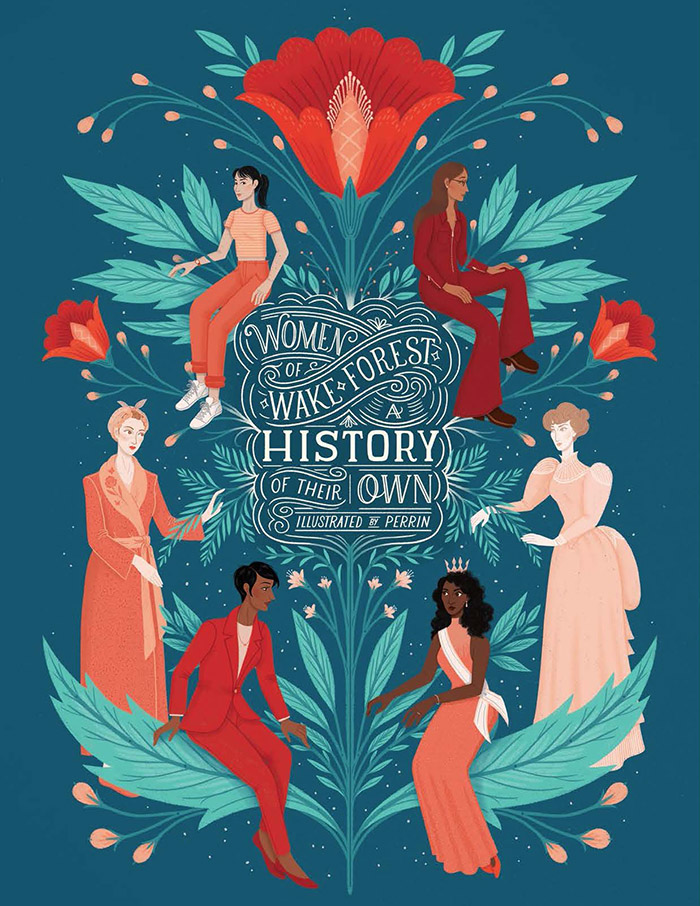 Evabelle Simmons, whose father is a professor, becomes Wake Forest’s first female graduate and possibly the first female college graduate in North Carolina. Trustees at first deny Simmons a diploma. They relent following male students’ protests and faculty approval of her degree. She becomes a teacher at Union Female Academy in Eufaula, Alabama.

Lois Johnson becomes the first dean of women; later her namesake is an all-female dorm.

Beth Perry’s roommate, Martha Ann Allen Turnage (’44, P ’80), reaches the finals in a debate tournament in Charlotte after passing the tryout for the Pi Kappa Delta forensics fraternity. As the Old Gold & Black reports on April 9, “She holds … the distinction of being the first member of the weaker sex ever to represent Wake Forest in a varsity debate tournament.” In the fall of 1943, Allen takes over as the first female editor of the Old Gold & Black.

Women buoy the spirits of sailors aboard the SS Wake Forest Victory cargo ship launched during World War II. The men ask for a “charming feminine mascot.” Students vote to crown Ruth Blount Fentress (’46) of Salisbury, North Carolina, as “Miss Wake Forest Victory” and send the sailors photos of her and 15 other coeds.

Wake Forest’s first officially sanctioned social society for women, Strings (later Pi Beta Phi), forms as a parody of Tassels, founded a year earlier as a women’s honor society. Other societies form through the years, and some eventually attach to national sororities. In 1988, Pi Omicron, a chapter of Delta Sigma Theta, a historically black sorority, is established, and with it, the Panhellenic Council.

The longstanding women’s dress code requires women to wear hose if they go to Raleigh and urges them to look their best in dorm parlors, including wearing a raincoat, shoes and a scarf to cover “those unsightly rollers” when leaving their rooms to answer the dorm phone.

Martha Mason (’60), who lived most of her life in an iron lung because of childhood polio, graduates first in her class. Her memoir is “Breath: A Lifetime in the Rhythm of an Iron Lung.”

Lula M. “Lu” Leake succeeds Lois Johnson as dean of women. Leake receives the Medallion of Merit in 1996, saluted for “leading students through what was arguably the most significant era of change for women in the history of this nation.” She retires in 1997 as associate vice president for academic affairs.

Elizabeth Phillips in English and Mary Frances Robinson in Romance Languages are named female full professors who later chair their departments in the 1970s. They follow trailblazer Jeanne Owen, a business professor. Owen earned the rank of full professor in 1963 while serving as acting dean of women from 1962-64.

The mandate to wear skirts or dresses is relaxed to allow slacks on campus but not to class. It is the last gasp before the dress code dies the next year.

Enrollment in the College reaches what the trustees call an “ideal population,” with 1,865 men and 1,030 women. President James Ralph Scales says the presence of women is “total, pervasive, inescapable” and points to Marylou Cooper Green (’74) as the first female student government president and Margaret Perry (P ’80) as registrar. A rule requiring chaperones for social occasions ends in 1969, and in 1970 no longer are women required to make up their beds by 10 a.m. Students still push to ax the curfew for first-year women, succeeding in 1974.

Women join the ROTC, taking part in all activities except handling weapons.

On an impromptu lark on a cold night, student government president Elizabeth “Beth” Daniels (’75) is one of several women in a crowd of 200 who join the latest fad — “streaking” — running nude around campus. Years later in an essay in “The History of Wake Forest,” Daniels writes, “I will never forget (President) James Scales’ line: ‘Well, we don’t have all the bare facts; so we’re just not going to discuss it.’”

To move toward parity under Title IX, the University raises the women’s athletic budget from $153,000 to $461,500 over three years and estimates in four years reaching $1 million annually to bring travel and women’s athletic facilities closer to men’s.

Wake Forest launches its Women’s Studies minor, which evolves into a major in the Women’s, Gender, and Sexuality Studies Department.

Suzanne Reynolds (JD ’77) is named the first female dean of the law school, and Donna Boswell (’72, MA ’74) becomes the first woman to serve as chair of the University Board of Trustees.

Photographer Kate T. Parker (’98) publishes her national best-selling “Strong is the New Pretty: A Celebration of Girls Being Themselves,” showing young girls’ fearlessness and character.

Despite having a migraine, Jennifer Kupcho (’19) becomes the first woman (pro or amateur) to win at Augusta National, a golf club famed for its Masters Tournament and notorious for not admitting women until 2012.

Editors’ note: The timeline has been updated with additional firsts for women. If you have another milestone to suggest, we will consider it. Send us an email at magazine@wfu.edu