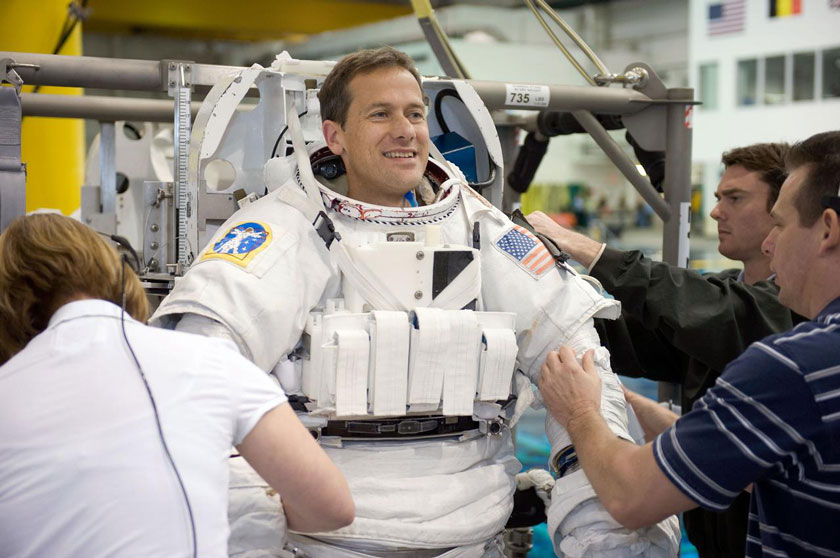 Astronaut Tom Marshburn (MD '89) gets help with the donning of a training version of his Extravehicular Mobility Unit (EMU) spacesuit in 2008. He was preparing to practice maneuvers in the underwater lab near NASA's Johnson Space Center. Photos by NASA.

Tom Marshburn (MD ’89) just follows his fascinations and gets where he wants to go.

Those passions have carried him twice to the International Space Station, in 2009 and 2012-13, with a third trip ahead this fall as a NASA pilot of the SpaceX company’s Dragon spacecraft. His four-person crew will spend six months orbiting Earth, his longest space voyage.

Marshburn, 60, journeyed from his hometown of Statesville, North Carolina, to beyond this planet by way of immersion in physics, then engineering, then medicine, then “flying medicine” as a NASA flight surgeon in 1994, then medical operations lead for the space station. In 2004, at age 44, he became the oldest American to be named an astronaut.

He has nurtured his lifelong love of the outdoors through a little mountain climbing and backpacking, including trekking from Canada to Mexico on the Pacific Crest Trail. He also has learned Russian and collaborated internationally on space missions. He lives with his wife and 18-year-old daughter in Houston, where he is based at Johnson Space Center.

Wake Forest Magazine talked with him about his career and space travel. The conversation has been condensed and edited for clarity. 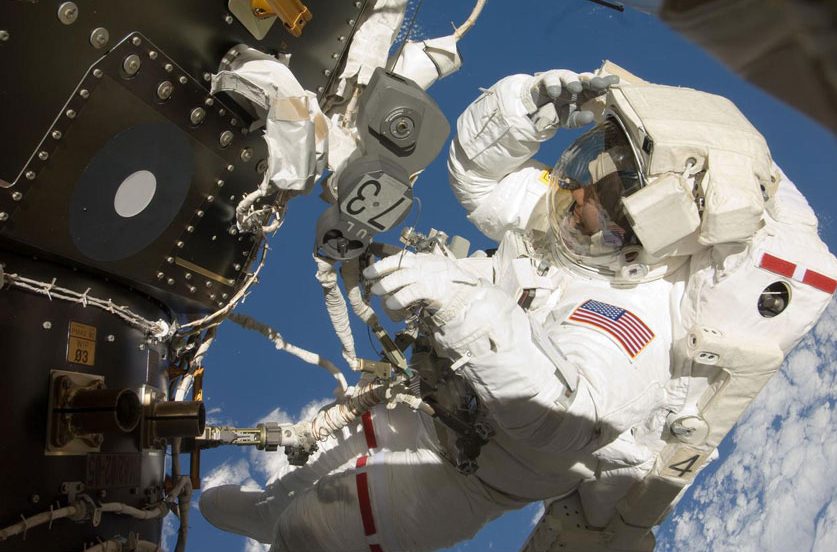 Marshburn works on fixing an ammonia leak during a walk in space in 2013 outside the International Space Station.

Why did you want to be an astronaut? You have said that seeing astronaut Neil Armstrong walk on the moon in 1969 when you were a boy influenced you.

Yes, that’s exactly right. I was an artist and loved to draw until my early teen years. I was fascinated with space. It was just a mysterious, somewhat frightening, but certainly exciting place. I found a book in the school library when I was 13 years old about Apollo 13, what all the engineers did and the astronauts did to come together to save the crew (during an aborted lunar landing in 1970).

I remember the weekend that I read it two or three times, and ever since then, it’s just been a passion. I read every book on space in the library. I originally wanted to build spacecraft, so I really buckled down on math and science in high school.

How did you go into medicine?

I was a physics major (at Davidson College) and then went into graduate school in engineering (at the University of Virginia). But what I seemed to be best at and the people I surrounded myself with were all in medicine. So rather than get a Ph.D., I switched over and got an M.D.

Why did you go to Wake Forest’s medical school?

(At Davidson) I got to know people that were going to the medical school, and I had heard wonderful things about it. The kicker for me was that there was a (now retired physician) physiologist named Phil Hutchins (MS ’66, Ph.D. ’69). He had a relationship with NASA and was doing some space-related research. That was the final thing that tipped the balance for me. And I did research with him in the summer and then continued to work with him. 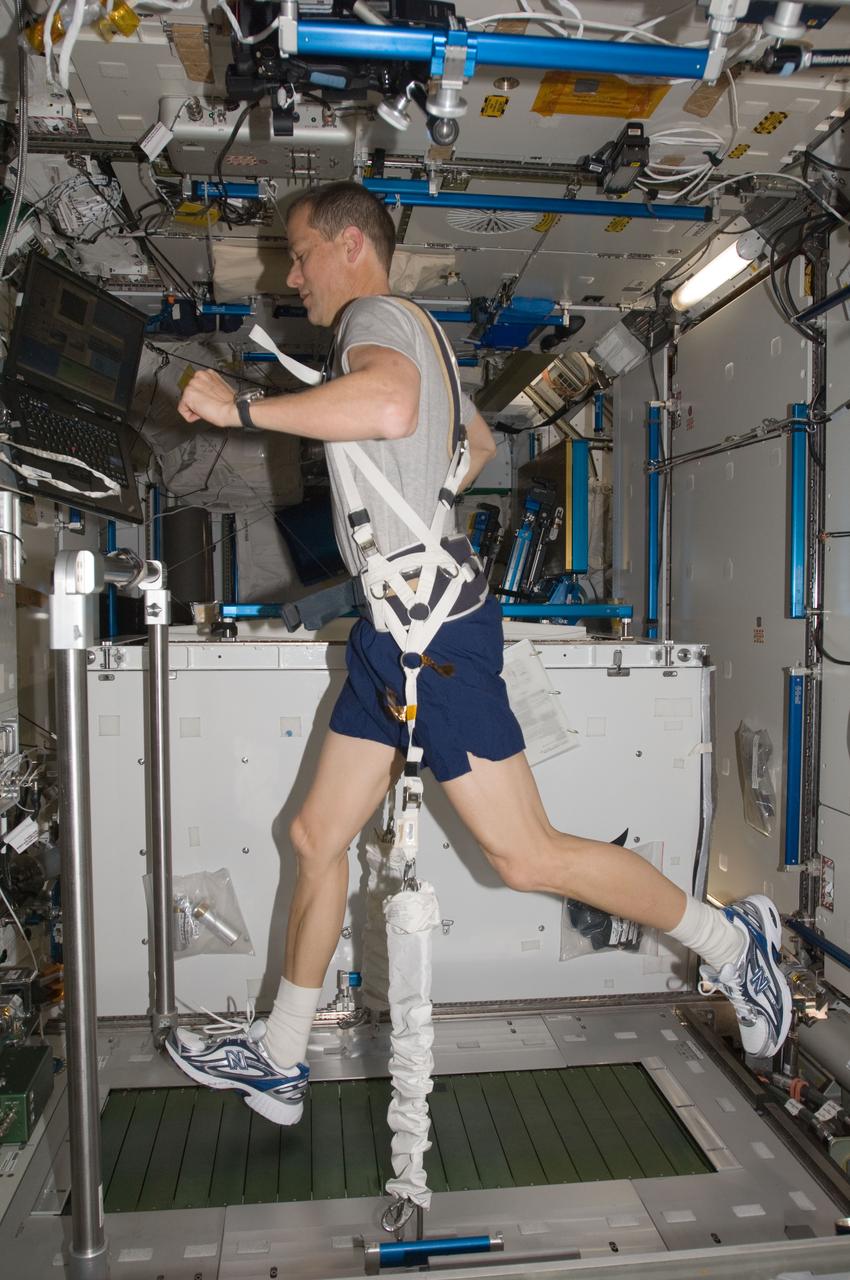 Marshburn exercises on COLBERT, the Combined Operational Load Bearing External Resistance Treadmill 2, in the Tranquility node aboard the International Space Station in December 2012. The crew spent 2 1/2 hours a day working out to counteract the effects of no gravity on the muscles, bones and heart.

How did you get to NASA?

I was so interested in medicine, I forgot about my space interests. When I went into residency in emergency medicine, one of my (attending physicians) informed me that NASA was accepting applications to train to be a flight surgeon, a doctor to pilots and astronauts. I made it in the first class, and I’ve been here ever since.

Were you already a pilot then? (He has private, instrument-rated, commercial and aerobatic licenses.)

It started at Wake Forest. I was up at Mount Airy (North Carolina). I had friends up there. I went on a little aerobatic flight with this kid. He was about 17 years old. He’d gotten his pilot’s license as soon as he got his driver’s license, and we went flying together and I was hooked. I got my license during (medical) residency in Ohio.

What will your new role as mission pilot on SpaceX’s Dragon look like?

Sitting to my left is the commander, Raja Chari. He was an Air Force test pilot before he became an astronaut. The dynamic phases of space flight — launch and landing — are so complex that much has to be automatic, so our job is to monitor all systems through each phase, which is very quick. We’ve trained to respond at any point if something goes wrong, what actions we can take to save the mission or save the spacecraft or certainly to save the crew. 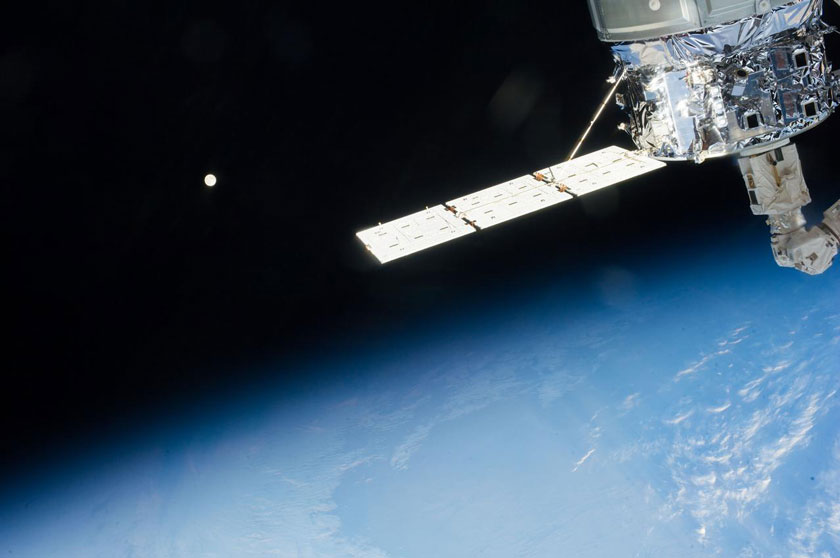 The International Space Station with the earth below and the moon in the distance.

You made an unplanned 5 ½-hour spacewalk to fix an ammonia leak on your 2012-13 mission. What was that like?

The best thing ever. As a backpacker and a climber, I very much wanted to experience putting yourself, your body on the line and the physical effort it takes to carry out a spacewalk. It was being at the true cutting edge of space flight. For climbers, if you’ve ever been on a highly exposed climb, when you’re overhanging and there’s nothing around you other than the cliff right in front of you, and then all open air — multiply that by about 10.

Uniquely though, in a spacewalk, what you really want to do is not make a mistake or do something that could be dangerous. There’s a lot of pressure to perform well. Some of the best training we have is for space walks. We have this big underwater pool where the station is about 40 feet deep, and we spent a lot of hours practicing. I felt very much at home once I sunk into my training.

Those moments are unpredicted because the schedule is very packed. But occasionally we’d have a little bit of time, snap a few photos and sneak peeks below your feet, which is very thrilling. Or just to look out, hold on with one hand and look out the other direction, so you can’t see yourself attached to any structure and see yourself moving across the Earth or have a chance to look up at the stars and the planets. It’s just very thrilling. 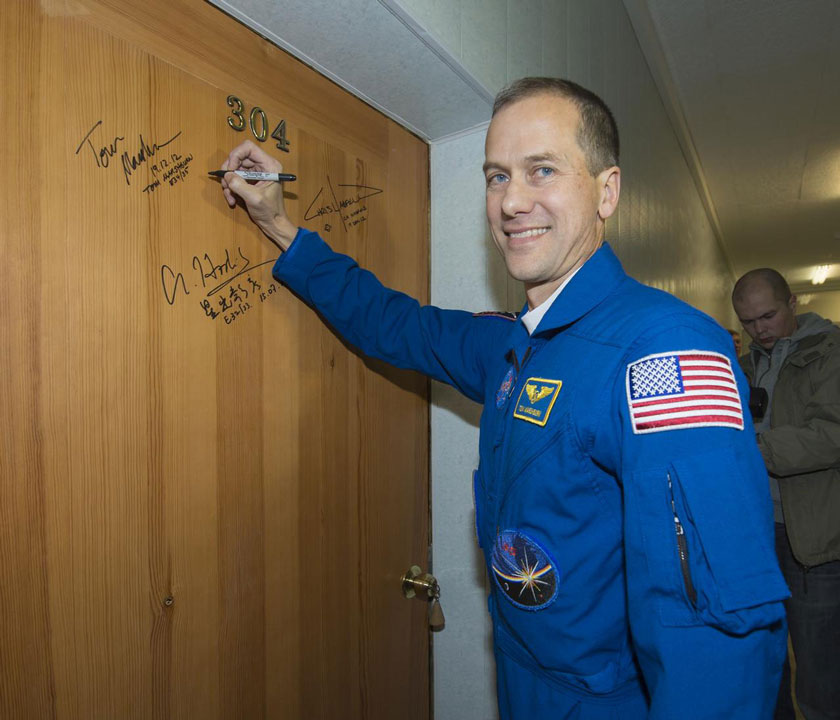 Marshburn performs the traditional door signing before he and Soyuz spacecraft Commander Roman Romanenko and Flight Engineer Chris Hadfield depart the Cosmonaut Hotel in Baikonur, Kazakhstan, for their Soyuz launch to the International Space Station on Dec. 19, 2012, for a five-month mission. Photo by NASA/Carla Cioffi 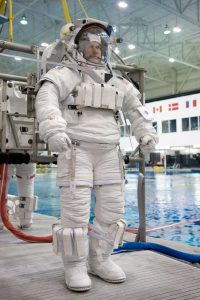 Marshburn at the pool in Houston with an underwater space station mock-up that allows hours of preparation for space maneuvers.

You have noted that NASA has addressed some of the challenges in space, such as maintaining bone, muscle and cardiovascular health and reducing isolation by connecting with family online. What challenges remain?

When we go to Mars, I’d say our biggest challenges are radiation, eyesight and social, because the speed of light’s going to restrict how much conversation you can have, with up to a 45-minute delay when you ask a question and you can get an answer. Not to mention all of the joys of seeing the Earth — and how that helps us being isolated for six months — is going to go away.

What are the radiation and eyesight issues?

The problem has to do with eyesight changing after you’ve been up there for a while. Exactly what’s causing it, we don’t know. (Currently) we can just solve it with a hammer — flying a lot of prescriptions of eyeglasses for one person to take care of any vision changes.

We know more about radiation in deep space, but that’s going to require a generation of astronauts to figure out how much we’re getting, even to totally understand galactic cosmic rays, which we can’t reproduce on Earth.

What’s exciting about the future of space travel?

Commercial space flight. The commercial companies are very interested in getting as many customers as they can, so do you really need the kind of physical selection they have for professional astronauts? Perhaps not. There are case reports in the medical literature of 90-year-olds being spun up in centrifuges to see if they can handle it. They’re really pushing the boundaries, which is very exciting. 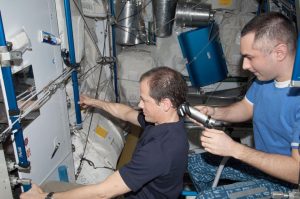 Marshburn looks into a mirror as Russian cosmonaut Evgeny Tarelkin gives him a hair trim in the Tranquility node aboard the International Space Station in February 2013.

What are your favorite space or science fiction movies?

Typically they’re far enough off the reality that I lose a bit of patience. Still my favorite is “2001: A Space Odyssey” — and “Apollo 13.” One producing the greatest wonder, the other just being more technically accurate.

You’ve talked about the scientific advances resulting from space exploration, such as how to prevent oxygen explosions, applying the tracking of fuel flow to improve medical devices and track HIV-AIDS.  What other research excites you?

There are a lot of opportunities in medicine. The biggest thing I’ve seen since my last flight is in DNA testing. It turns out that if you remove the effects of gravity on any living organism, you change the cytoskeleton of the individual cells and the overall physiology of the organisms. (By studying virulent bacterial strains without gravity, scientists) were able to very quickly understand what antibiotics, what therapies, what proteins can be used for antibodies to fight them. There’s a whole world out there that we haven’t tapped into.