O n the night of my birth, Wake Forest was in the NCAA tournament. My mother’s water broke, and my dad said, with regard to a trip to the hospital, “You’ll need to wait until the game is over.” 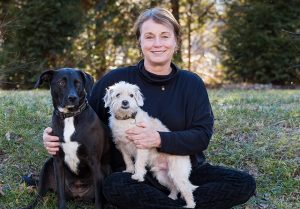 Sommer with Luna and Jazz, the little one

Growing up in Winston-Salem, Wake Forest was woven into my soul. Wearing homemade black and gold dresses to ACC games, I became a member of “Cal’s Club,” named for football coach Cal Stoll. Charles “CD” Davis (’71, MALS ’97, P ’96), 1971 ACC Player of the Year, was my first African American hero, even as Winston was embroiled in racial tensions over desegregation. In high school, basketball coach Carl Tacy (P ’82) and his wife were my Sunday school teachers. I was destined to be a Demon Deacon.

A demon deacon: what a curious conflation of good and evil. Has it ever struck you that there is something strangely powerful about our unusual mascot? Compared to a ram or a wolf, how does it stand a chance? As I write this in January, I have no idea where we will soon be as a nation, but I am convinced we need access to this hidden insight. A public narrative of good against evil has claimed our consciousness, and far too many of us believe we know clearly who is “in” and who is “out,” despite the fact that some of our origin stories — e.g., Genesis 2-3 — tell us the very desire to know good and evil is the root of our falling. A demon deacon wreaks havoc with either/or thinking.

Here are some Demon Deacons who revealed this truth to me.

In 1983, I asked to meet with Glenn Hinson, visiting professor in the Department of Religion and a renowned church historian. For four years I had been an active member of campus Christian groups, but suddenly, once I decided to attend Princeton Theological Seminary, I lost most of my Christian friends. Princeton was where much of the early fundamentalist-modernist debate over the inerrancy of Scripture began. This fundamentalist doctrine maintains that Scripture, in its original manuscripts, contains nothing contrary to fact and is free from error. Princeton had not accepted this teaching, and my friends, mostly inerrantists, feared for my salvation.

Dr. Hinson calmly selected books from his shelves saying, “Well, you could look at it this way, or this way or perhaps this way … depending upon what time in Christian history or what theological perspective.”

Instead of telling me what to believe or think, he exposed me to the breadth of experience and belief within 2,000 years of Christian history, all within the span of a one-hour meeting. He introduced me to Dietrich Bonhoeffer, an imprisoned Lutheran pastor of the German “Confessing Church” that opposed Nazism, and to his theological ideas of God as the “beyond in the midst” and “only a suffering God can save.” Such words of Bonhoeffer, who sadly knew from too much experience that good people do indeed do terrible things, toppled my dualistic categories.

While at the Worrell House in London, Dr. Carl Moses, through his comparative politics class, helped me to see that democratic socialism is not a misnomer. Those two things — democracy and socialism — enable us to uphold individual freedoms even as we serve the collective good.

My freshman roommate, Zenia Raudsepp (’83), who hailed from New Jersey, probably did not know what to think of such a Southern girl and, on Day One of freshman year, I met my first “damn Yankee.” Our mutual respect for our differences evolved to the most lasting friendship I have. She became a little Southern. I became more Yankee.

Those large Demon Deacon shoes in my experience enable us to stand firmly while we are pushed and shoved by those who would have us trample our opponents. My life as a minister, a professor, a mother, a friend and a business owner has been shaped by this curious mascot who symbolizes humble courage to me, reminding me that while some may be at fault, all are responsible. Game over.

Jeanne Matthews Sommer (’83) has a master’s of divinity degree from Princeton Theological Seminary and a Ph.D. in theology and comparative literature from Northwestern University. She was chair of the religion department at Warren Wilson College from 1995 to 2012. She owns Hidden River Events in Swannanoa, North Carolina.