Shane Harris (’98) lives deep in the world of deadlines and complex reporting as intelligence and national security writer for The Washington Post, but “the past four years were quite extreme,” he says.

“Sometimes at the Post, … we would be accustomed to seeing as much news in a day as we might normally see in a month,” says Harris, the keynote speaker for the online WordsAwake4! Conference on April 17, honoring four new members of the Wake Forest Writers Hall of Fame and presenting experts on the art of writing.

“It’s truly been a lesson in not making too many plans because interruptions became about the only thing that was predictable in my life,” says Harris, pictured above in a 2017 meeting with students at Wake Washington Center.

There’s “a bit more regularity in the news cycle now” with a new presidential administration still in its honeymoon phase, Harris says. “I predict that that probably won’t last long, but it’s welcome while we have it.”

Tom Phillips (’74, MA ’78, P ’06), organizer of the virtual writers conference April 16-17,  introduced Harris at the event to honor the latest Hall of Fame inductees. (See story). Phillips noted that Harris “zoomed into the national writing consciousness” early on. Before joining the Post in 2017, Harris worked at The Wall Street Journal, The Daily Beast, 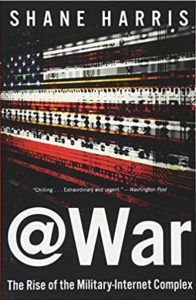 Foreign Policy magazine, Washingtonian Magazine, the National Journal and several other magazines. He is also an International Security Program Fellow at New America, a nonpartisan think-tank.

In 2019 he and others at the Post were finalists for the Pulitzer Prize for Public Service for their coverage of the murder of Saudi-born journalist and Post contributor Jamal Khashoggi inside Saudi Arabia’s Turkish consulate.

Harris has written two books, “The Watchers: The Rise of America’s Surveillance State” (Penguin Books, 2011) and “@War: The Rise of the Military-Internet Complex” (Eamon Dolan/Mariner Books, 2015).

Harris says Wake Forest played a big role in how he became a journalist, even though he had no intention of choosing that career when he graduated.

At Wake Forest, he was a writer, performer and director in the Lilting Banshees comedy troupe and spent most of his time in the theatre. He moved to Washington, D.C., because it captivated him with its stories of American history, government and politics and the great writing in the popular “West Wing” television series. A small 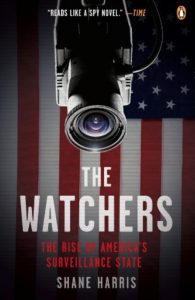 magazine hired him as a researcher, telling him (to his amusement today), “We want a recent college graduate because you know how to use the internet, and we think the internet has a lot of potential as a tool for research.”

The monthly magazine cycle felt familiar to him from his days of building to a deadline for a play, then starting over again, and journalism’s merger of research and writing appealed to his already intense curiosity and love of storytelling, this time in nonfiction form.

We stand in for readers and listeners and viewers who have questions for our leaders and for powerful people who have influence over our lives, but our readers have few ways to ask them.

Harris says he has heard consistently the criticism of journalism as too negative.

“I’ve heard that for the 20-some years I’ve been doing this, and I understand people’s frustration,” he says. Stories about what’s not working in the world can make readers feel helpless, isolated, unable to fix those problems and seeing more despair than hope.

“But where people see negativity and pessimism, I actually see a search for meaning and for clarity — and hopefully for truth,” he says.

Journalists are confrontational and adversarial, which is not the same as negative, Harris contends. “We stand in for readers and listeners and viewers who have questions for our leaders and for powerful people who have influence over our lives, but our readers have few ways to ask them.”

Harris says journalism can never be objective; it’s fundamentally subjective. It requires “innumerable decisions of what questions to ask, which people to talk to, which voices to represent in a story, which tips to follow, which facts to emphasize in a story. … And that is an awesome responsibility, and one that I have never taken lightly or taken for granted.”

He says the recent breakdown in agreement on facts has been disorienting.

“This is the bedeviling problem for people in our industry right now. Until recently, people had strong opinions and disagreed on policy, (but) they knew we had a common set of facts with which to work.” 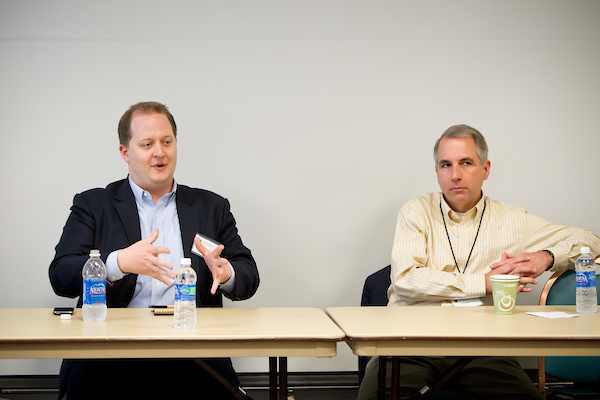 Shane Harris, left, and journalist Mike Riley ('81) spoke together on "Writing News" at an earlier WordsAwake! conference on campus in 2012.

Harris says not only do people disbelieve what they read in the press, reinforced by a former president who consistently claimed news was made up. “They don’t believe what they see with their eyes. And that’s really disturbing,” he says. “I don’t know how exactly we repair that, but … that’s going to take all of us, and we as journalists are just one piece of that.”

Journalist Mike Riley (’81), who was inducted into the Hall of Fame on April 17 when Harris spoke, reinforced Harris’ hopes. “The media landscape is vastly different. It’s a broken business model. The fact-based model of reporting is breaking. … There’s disruption; there’s transformation; there’s destruction; and there’s innovation. And there’s a lot of really good innovation happening out there.”

Riley, who is president, CEO and editor-in-chief of The Chronicle of Higher Education, pointed out that local newspapers especially struggle. When he led The Roanoke Times in Virginia, the newsroom had 150 staffers; it now has 37. “I hope in your community are nascent ventures that are finding ways to bring you the information, the news that you need, so find a way to support them,” Riley says.