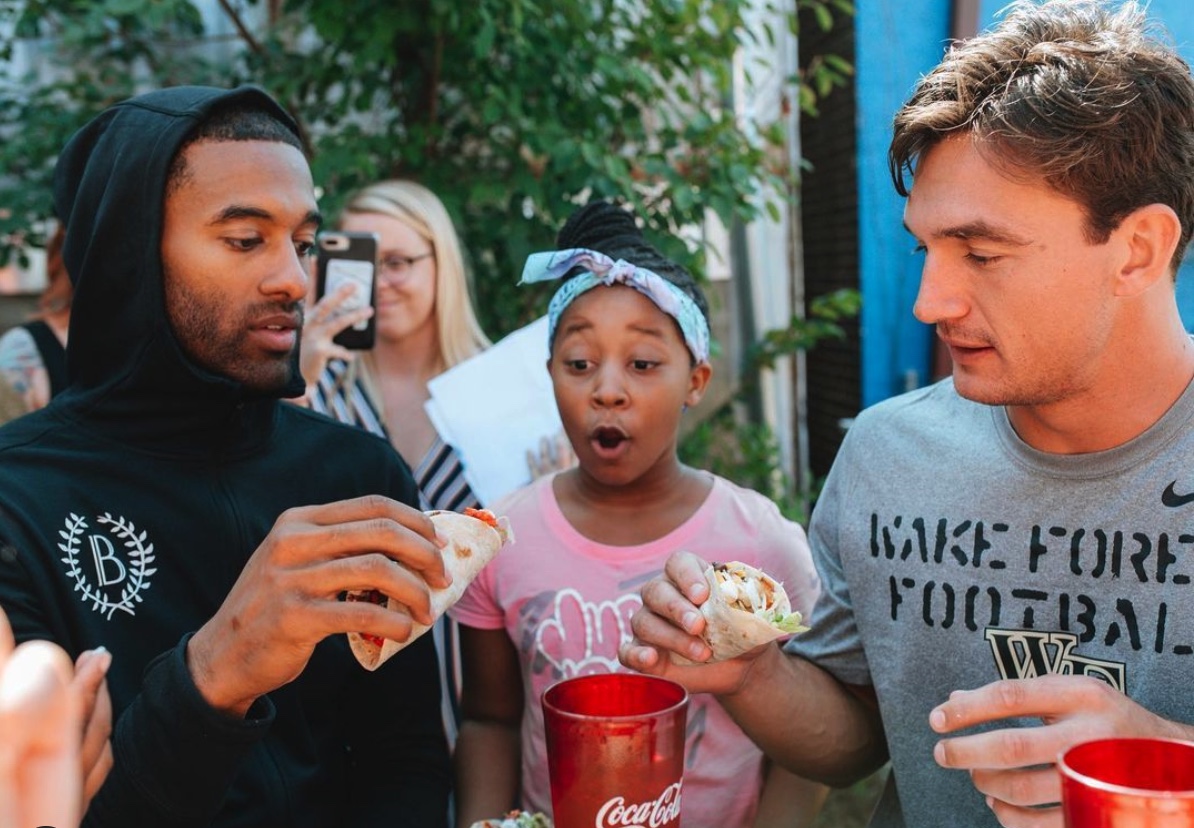 Matt James ('14'), left, and Tyler Cameron ('15) share a meal with a student. They are best friends,former football teammates at Wake Forest and partners in ABC Food Tours in New York City. Top, James in a screen grab from the Good Morning America video announcing that he would compete in Season 30 of "Dancing with the Stars."

Matt James (’14) had 880 followers on Instagram in 2019, when Wake Forest Magazine wrote about his ABC Food Tours in New York City. The tours introduce new tastes to Lower East Side schoolchildren affected by homelessness and show them they can aspire to own a restaurant. 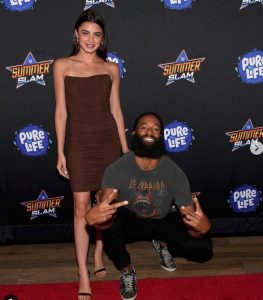 James with girlfriend Rachael Kirkconnell, a graphic artist. He  says she didn’t mind the bushy beard he grew after “The Bachelor” in an effort to move away from his TV image. He shaved it for “Dancing with the Stars,” thinking it would be a distraction and less than ideal for cheek-to-cheek dancing.

Just two years later, his followers top 900,000, a number  that likely will go up with the Sept. 20 premiere of his latest TV adventure as a contestant on “Dancing with the Stars.”

James, a former Wake Forest football player raised by a single mother, rose to celebrity status as the first Black star of “The Bachelor” on ABC-TV. He rolled through the drama-filled season that aired earlier this year, including an emotional conversation with his father, who was absent in his upbringing in Raleigh. His relationship with contestant Rachael Kirkconnell also took a roller-coaster ride. Racially insensitive photos from her past led to public criticism, an apology and a rift with James, who gave her “the rose” in the finale but not a marriage proposal. They reunited this summer.

Since the show ended, James has been growing in many directions — including sprouting a mountain man beard, which he recently shaved. He has expanded ABC Food Tours with Tyler Cameron (’15), his best friend, roommate, former Wake Forest football teammate and co-founder of the not-for-profit operation. Cameron had appeared on “The Bachelorette” and introduced James to that show, but James was promoted to “The Bachelor.”

Wake Forest Magazine talked with James about his experiences and new ventures. He recently left his job in real estate, which had lost some luster in the pandemic. The conversation is condensed and edited for clarity and brevity. 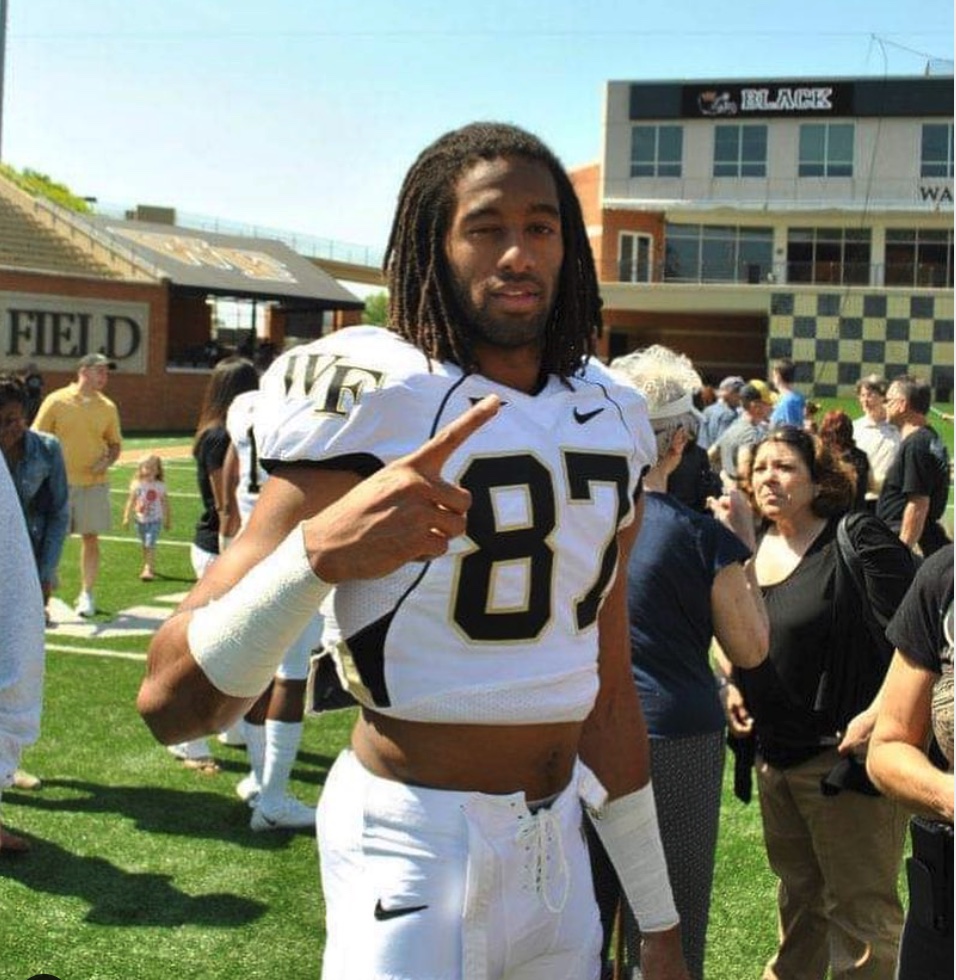 James as wide receiver on the football team at Wake Forest. He played professionally in a brief career before taking a financial position, then moving to New York City in commercial real estate.

Q. What did you learn from “The Bachelor”? 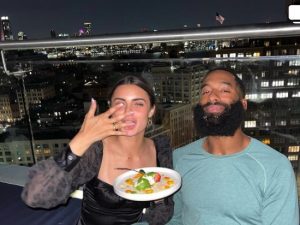 What I’m most grateful for is where it pushed me to, from a vulnerability standpoint. I hadn’t been on a TV show, so I didn’t really know how production works. I just was my authentic self. I shared a lot that I’ve never shared with even my closest friends because my thought processes were on the potential that I might spend the rest of my life with one of these women. They need to know everything that comes with being with someone like myself — the good, the bad and the ugly.

You try to find authentic and organic ways to express that in an environment where it’s hard to have those conversations. It’s hard to get to know somebody to the point of wanting to propose. It’s such a serious and long-lasting commitment. So that wasn’t easy for me.

I’m social, and I have a broad array and range of circles of people that I interact with, but the information I share is very minimal. As you know, my dad came out there, and we had conversations we hadn’t had before. That ultimately led to good things and relationships getting mended in our hands. It’s a testament to what happens when you’re vulnerable and you give other people a chance, not only my dad and my family, but the other women, to see that you’re not holding back.

All the experience just amplifies the true version of who you are. I say that because the things that I’m passionate about most I’ve found a way to push to the forefront of my focus. That’s not a career in Hollywood. 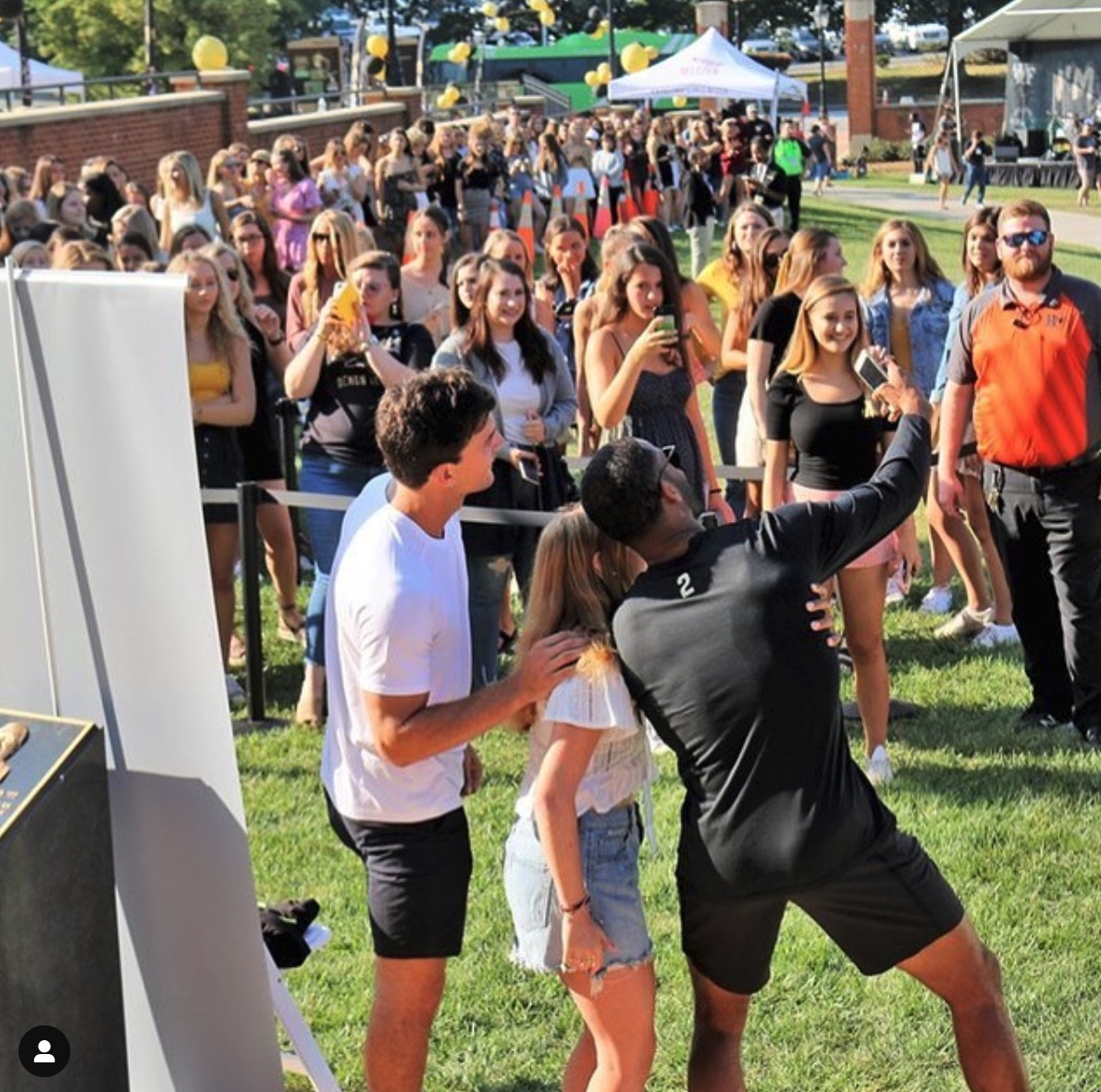 Q. How did you deal with living with cameras on you all the time?

You think about that initially because you’re, like, “I don’t want to say the wrong thing. I don’t want to offend somebody.” But ultimately you revert back to who you are. You can only walk on eggshells for so long. You’re only reminded of it when this thing is played back, and you’re, like, “Oh, my gosh, we got into this conversation, and now we have to watch it.” But by that time, I’ve made peace with it.

Q. What surprised you about being on “The Bachelor”?

I was surprised at how polarizing it was. There was a lot that took place in the season that was being discussed on Fox News, on CNN that has ripple effects literally across the country. I think important conversations came out of some of the situations (on racial issues). 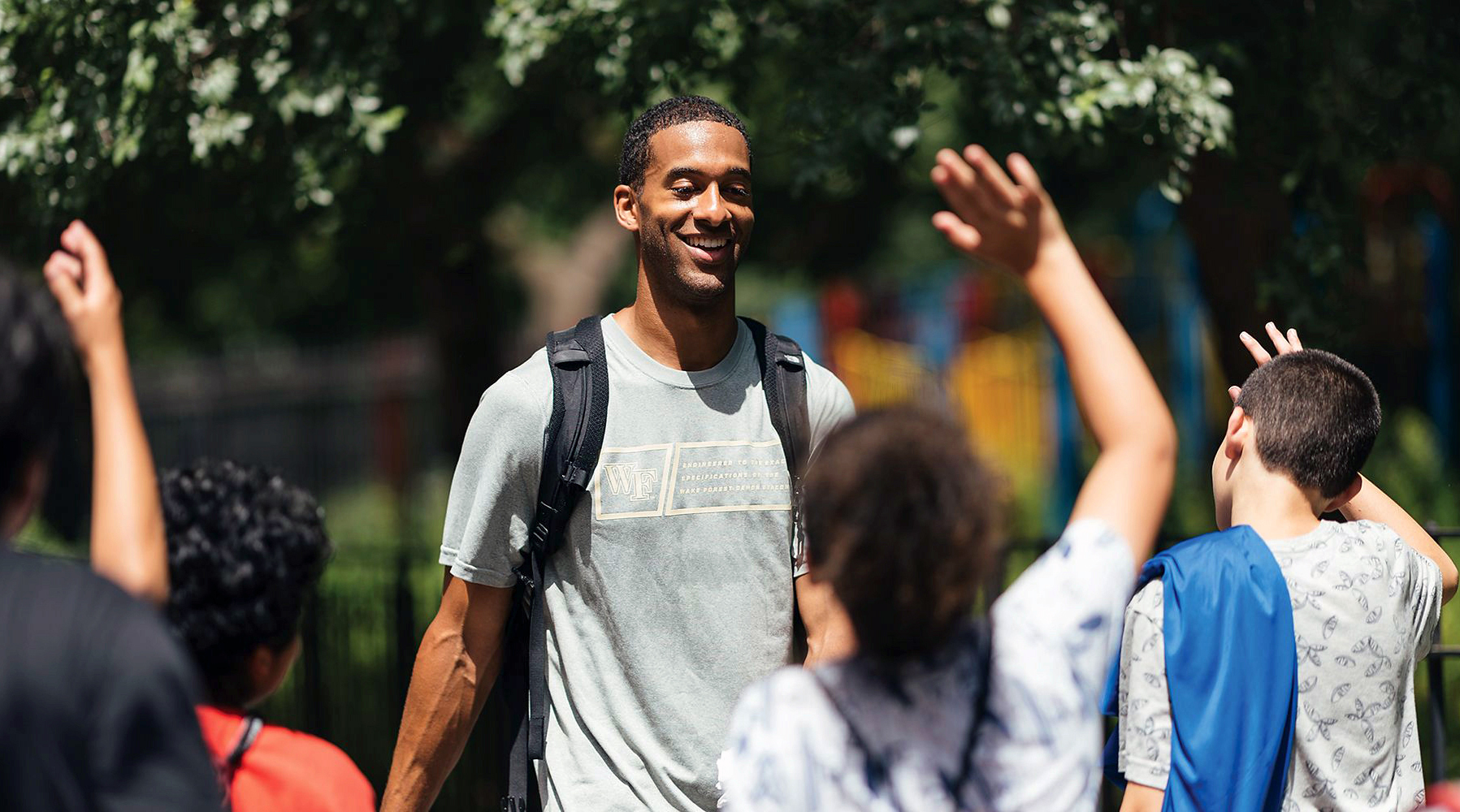 James walks on a food and neighborhood tour in the Lower East Side in 2018 with children affected by homelessness. Photo by Joe Martinez ('06)

Q. How are things going with ABC Food Tours?

Last year with the push that we saw in the country for social justice and equality, that has refocused our approaches to how we want to serve the students. A lot is centered around providing an opportunity for them when they finish with us, jobs and externships that can potentially change the trajectory of their life.

Q. How did you decide on your new focus on hydroponics in the schools? 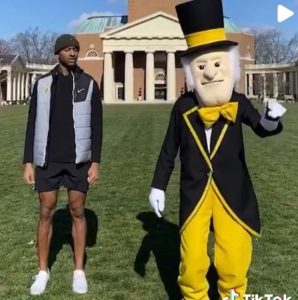 (It’s) what I’m most excited about. During the quarantine, I started growing my food with Tyler. I didn’t know that much about farming or hydroponics, but what I figured out was that Tyler and I could grow our own food by plugging in this machine (with) a mixture of water and sun, and if we could do it, then anybody could do it.

And that got our wheels turning about how we wanted to interact with our students. We spent a year trying to combat this virus and making sure that we were sanitizing and quarantining and that nothing (unhealthy was) coming in our body. Education around not only hydroponics, but how to prepare and grow your own food, is important because I think that’s where we’re going as a country and as a world. Farming currently is archaic. As the population grows and the land is constant — we’re not going to grow more land — we have to come up with creative ways to utilize what we have.

The goal is to create skills and life lessons that go hand in hand with growing your own food, farming, being sustainable, feeding people, being in your community, working a good job, having responsibility. All those things we’re tying into these hydroponics farms that we’re intending on placing in communities, urban areas that our students are going to work. They’re going to grow, whether it’s mushrooms, lettuce, tomatoes, eggplant, squash, and they’re going to be in charge of that process all the way through, making sure that they’re packaged and ready to be sent off to different purchasers in the city — restaurants, grocery stores.

(That includes how to cook) because a lot of the students have never had access to healthy food, and there’s 100 different ways to prepare an eggplant that are delicious. Hydroponic farm stands are what we’re going to have in classrooms, with similar lessons but on a smaller scale.

We’ll start with the hopes of spreading out through (New York City) and then the same thing in Chicago and LA. 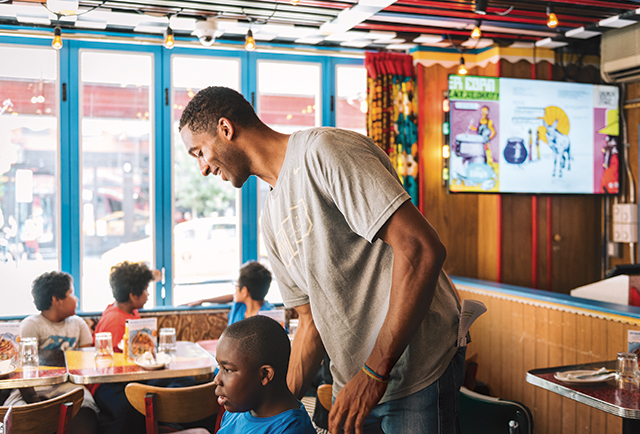 Matt James with students at Miss Lily’s diner, one of the stops on his food tours in 2018. Photo by Joe Martinez '06

Q. How did the schoolchildren respond to you being on TV?

I think it was more so their parents. The kids aren’t tuned in to that sort of programming yet. But when they see you on TikTok or Instagram, they’re confused as to why Mr. James has so many people following him. They say, “Give me a shout out.” I’m, like, “I got you.”

Q. How did you become a partner with BlockFi, a cryptocurrency company? 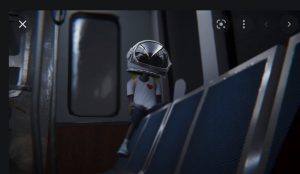 From “Why Not Me” by Micah Johnson

NFTs fascinate me, and I wanted to have skin in the game.

(An NFT, or non-fungible token, is a digital asset that represents real-world objects, including artwork, bought and sold online, often with cryptocurrency. Cryptocurrency is decentralized digital money, not always regulated, with Bitcoin and Ethereum the best-known companies.)

I was looking for projects that would be a good entry point. I heard about this piece called “Aku.” (It’s an animated work featuring a Black boy who dreams of becoming an astronaut, created by artist Micah Johnson after his nephew asked him whether astronauts could be Black. In July, Johnson’s “Why Not Me” became the first NFT art beamed to the International Space Station.)

This was such an inspiration to young Black kids that, yeah, you can be whatever you want to be. It seemed like a meaningful way to get into the collecting space. I made my first purchase. I continued to ask a lot of questions, learn as much as I could.

I’m more so a proponent for education, as opposed to giving financial advice. It’s more making sure that the students that we work with in these communities understand the asset class so that they don’t miss out on such a big opportunity. I’ve seen how these major institutional investors, hedge fund managers, extremely ultra-high-net-worth individuals are navigating it. (I want to make sure) the students that don’t have access to those conversations are privy to it.

I found a platform that was easy to navigate. The co-founder is a woman, and she’s diverse. Their morals and values seem to align with what I’m into. I think that this next generation of consumers cares more than our predecessors about what are you doing socially? People who do more and are good stewards of what they’re doing are going to be rewarded with more businesses, more eyeballs, opportunities. 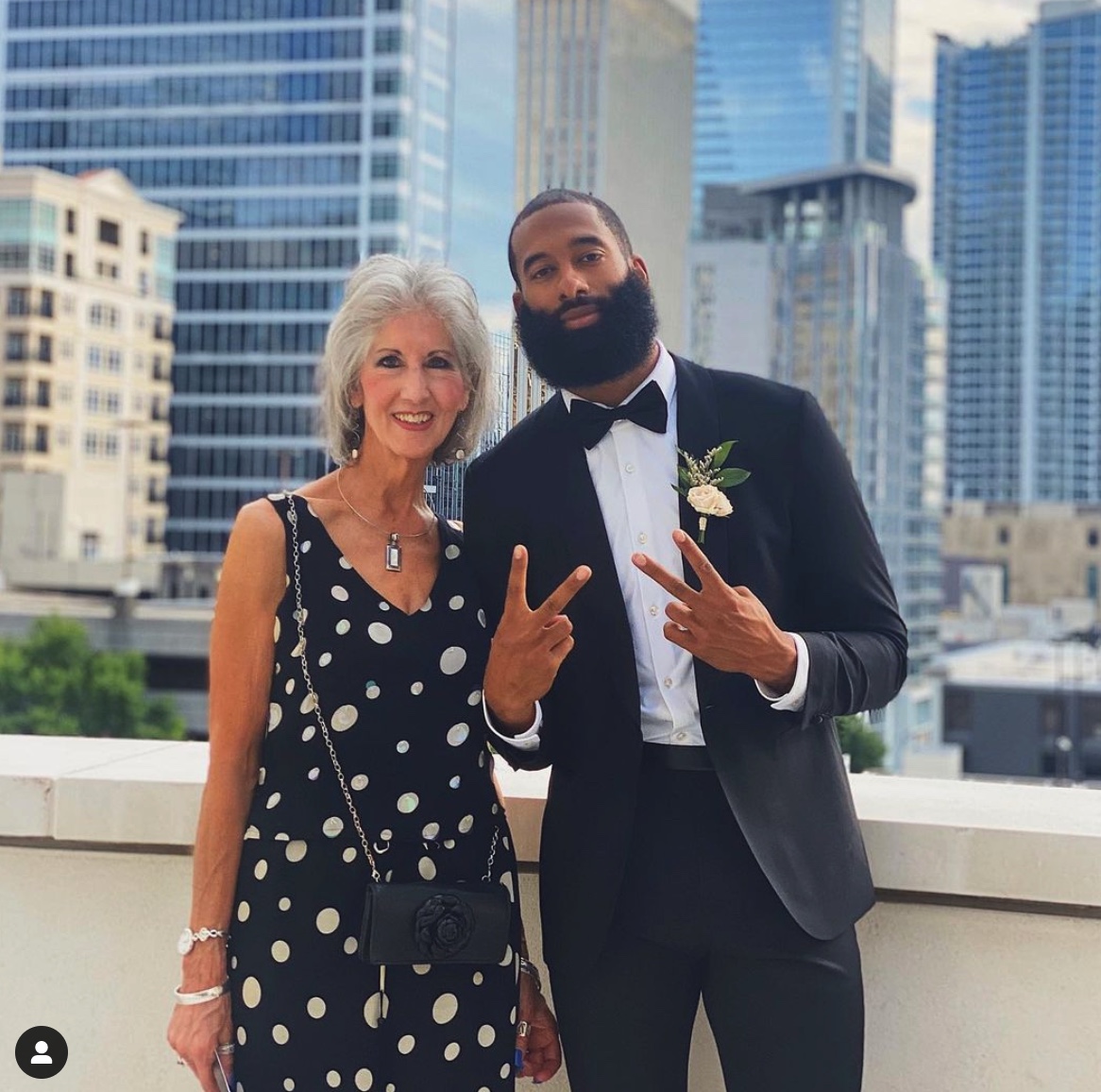 James ('14) with his mother, Patty James of Raleigh.

Q. What are the highlight memories from your travels after “The Bachelor”?

I love sports. I love to compete. I was able to play in charity basketball tournaments with some of my favorite artists, (rapper) Jack Harlow, (hip-hop trio) Migos, Justin Bieber and then athletes, a handful of other NFL guys. (He had a short pro football career.) You form relationships with these individuals that are excelling in their careers, with the common ground of athletics.

Q. I’ve seen a lot of images of you skateboarding. Is that a new interest? 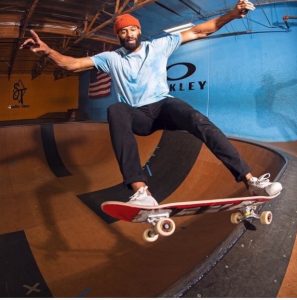 I’ve always loved skateboarding (since seventh grade), but I’ve never had a chance to fully go for it like I have since the show finished. When I was playing (football), if you got hurt skateboarding you could lose your scholarship. My joints are putting up with it. And this is one other way to connect with people, build friendships and relationships.