U.S. Army veteran and writer Matt Gallagher (’05) spent the first two weeks of March in Lviv, in western Ukraine, training civilians to protect their city of more than 700,000 people against the Russian invasion. His first-hand account of his time in Lviv was printed in Esquire magazine. CNN broadcast a story on March 15 on Gallagher and two other veterans giving a crash course in combat to Ukrainian volunteers. When CNN’s Anderson Cooper asked Gallagher why he was in Lviv, he replied: “I kind of landed on an old line from ‘For Whom the Bell Tolls.’ ‘For what are we born if not to aid one another?’ ”

Wake Forest Magazine’s Kerry M. King (’85) caught up with Gallagher by Zoom on March 18 while Gallagher was in Poland, three days after he left Ukraine, to hear the rest of his story. “This is about Ukraine fighting for sovereignty against Russia. My experience gave me some skills and knowledge that I thought could be helpful to these people,” Gallagher told me, referring to his four years in the U.S. Army and service in Iraq. “It was amazing what they accomplished in two weeks.” He closed our 30-minute conversation with two words: “Pro Humanitate.”

The key was (veteran) Adrian Bonenberger (who is also featured in the CNN story) and his wife, Iryna, who is Ukrainian. They handled all the logistical aspects. I trust them. They put out a call: “If you’re interested in doing this, this is what we’re doing.” This was no secret spy (mission). These are just regular people who need and want basic training. He reached out to me on a Saturday afternoon and the link-up time and place was JFK airport Monday evening.

I had two sleepless nights wrestling with it. It goes back to that Hemingway quote from the CNN piece. I was looking at my sons, tucking them in, feeling really conflicted about the potential of leaving them, but wanting to set a good example and knowing that this was a unique opportunity. I wasn’t going over there to be a cowboy. It was just on me to go, and my wife was a champ about it.

But still, you could have said to Adrian, “Look, I’ve got a wife and two young kids, I can’t go.” No one would have blamed you for saying that, but would you have blamed yourself if you hadn’t gone?

I think so. It was a unique opportunity to walk the walk. I’m a writer. I’ve been talking the talk for a long time. I could do something instead of being a commentator.

"For what are we born if not to aid one another?"

Did anyone from the State Department or anyone else in our government know what you were doing?

(I reached out to) some friends who work in various government jobs, not so much asking them for permission in any kind of official capacity, but just wanting to know if there were any potential consequences. The almost universal response to that was, as long as they (the people he was training) are actual citizens, as long as this is focused on self-defense, as long as this is not some covert military, paramilitary operation, you’ll be fine. Some fellow Wake Forest graduates, who I won’t name because they do work for Uncle Sam, were very helpful in collecting information.

Knowing that conditions in Ukraine are constantly changing, what was Lviv like when you were there?

Lviv is an interesting place right now. It’s a haven for refugees coming from the east. It’s a staging ground for a lot of the humanitarian and war effort that’s pouring in from the West (from the United States and other countries). We mostly spent our days in a very specific place training these folks, but a couple of times we went out and explored the town. There’s this weird, nervous energy everywhere. We were there when some cruise missiles hit a military base just north of Lviv. Lviv is not at war; it’s not a city at peace either. Air raid sirens were a daily part of our existence, which is something I’d never dealt with before. (Incoming) mortars in Iraq were not the same thing as this. 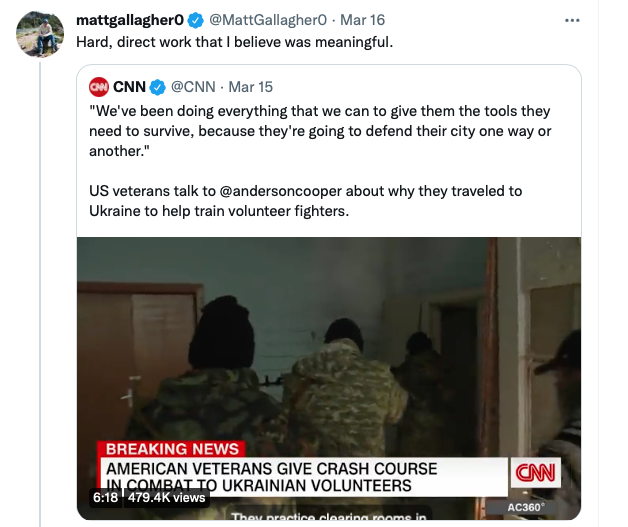 But wasn’t there a sense of dread, that Lviv is next in the crosshairs?

It never felt fully safe, but it never felt fully dangerous either. We were walking to breakfast one morning. We had pushed back training to give people an opportunity to rest because these are not people used to running around, beating up their bodies eight hours a day, so we gave them the morning off. The air raid sirens went off, and, in the blink of an eye, it went from a normal central European city to folks just dashing wildly for bunkers. We happened to be next to a large police precinct that could well have been a target, so we got away from that as quickly as we could. Then 30 minutes later, it was like flipping a switch, it was back to having orange juice and eggs at a local cafe. There’s a curfew, and a lot more military people are out than I think you’d find in Lviv normally, and there are checkpoints. The city is caught between peace and war.

You were in a lot of tough situations in Iraq, but were you afraid for your safety in Lviv?

No. There were a couple of moments of anxiety, but not the kind of fear that I remember from Iraq. We’d been on the ground (in Lviv) maybe 12 hours before we gathered in this old Soviet-era warehouse at dusk, and there’s 40, 50 strangers, who we’d soon get to know well, staring at us for guidance. That was intimidating, but I wasn’t afraid of them. It was more like: “This is a serious charge. This is a serious responsibility. Let’s make this as professional as possible so you give them something meaningful.” 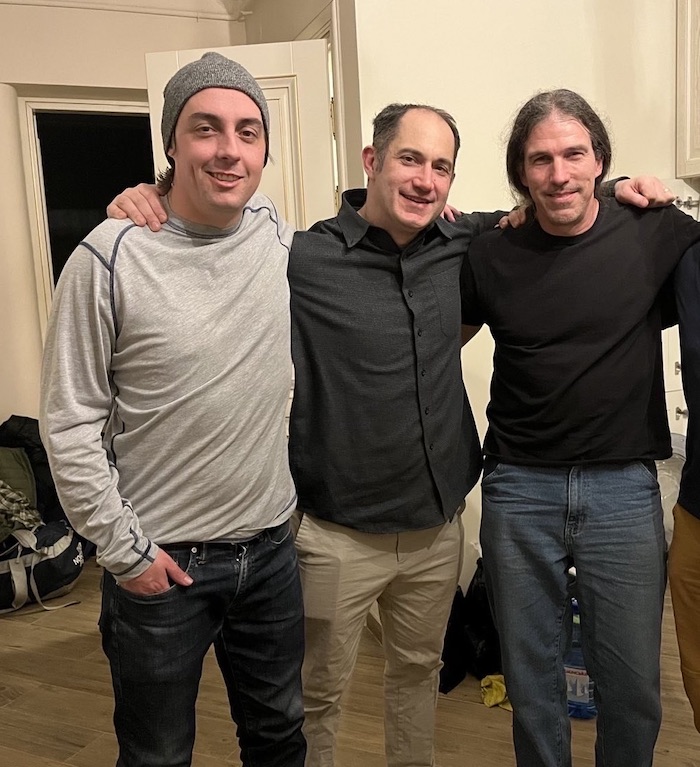 As you said in the CNN piece, the people you were training were everyday people, civilians, living lives similar to ours a month ago. Can you talk about some of them?

I was drawn to the young cadets, the guys in ROTC training at their university, or before all this went down, they’re law students. They reminded me of myself and my friends at that age. We had women in the group, IT workers, some of whom had never fired a weapon before but want to be prepared to defend their homes if necessary. One character that really stood out, we called him RoboCop. He was tall, brash, he just had ‘it.’ We assumed he was a former police officer. He was actually a lawyer, and the bravado and presence that he exhibited were honed from decades in the courtroom.

These were the type of people we wanted to work with, to focus on defense and survivability. For some of them, teaching them firearms (training) is important, but I stressed to them that if things really go awry, it’s on you to make the choice to pick up a gun. That’s a heavy thing, and I wouldn’t begrudge anybody that decides they just can’t do it. But there are other ways in a resistance movement to contribute just as a normal citizen with your eyeballs. We stressed to them we want you to be prepared, but you’re not soldiers. We just want you to have the basics so that when the time comes and you make that choice, you have some skills and knowledge that you didn’t have before.

It’s impressive that they wanted to do this.

I think it’s hard for Americans to imagine because we haven’t fought a war on our soil since the 1860s. It’s something everyday people can and should do: Protect their families, protect their homes, protect their neighborhood. That’s what I found so inspiring was these people were walking the walk themselves. This is not something they want to do, but they’re being placed in a position where they have to. They just want to be as prepared as possible for that when it comes.

"This is not something they want to do, but they’re being placed in a position where they have to."

Matt Gallagher ('05) on giving civilians in Lviv a crash course in combat.

And one of you said that these are people who are probably going to fight anyway, so you wanted to at least prepare them a little bit.

Exactly right. That kind of resolve and will power, we’ve seen it. It’s real. It’s genuine. These are a sovereign democratic people facing an existential threat. The only thing I could liken it to is, as an American, probably those days right after 9/11 where there was national unity. Ever since, our country has not had that for a variety of reasons, but just seeing that (in Ukraine) is inspiring.

Do you think some of them will fight when the time comes?

I do. What that means for each of them is going to be different. RoboCop, for example, I have no doubt he will have his own squad and be ready to engage them directly if he needs to. Others, it’s a hard thing to pick up a gun in these circumstances, and they’ll find their own ways they can support the effort, but all of them will contribute. There’s not a doubt in my mind. 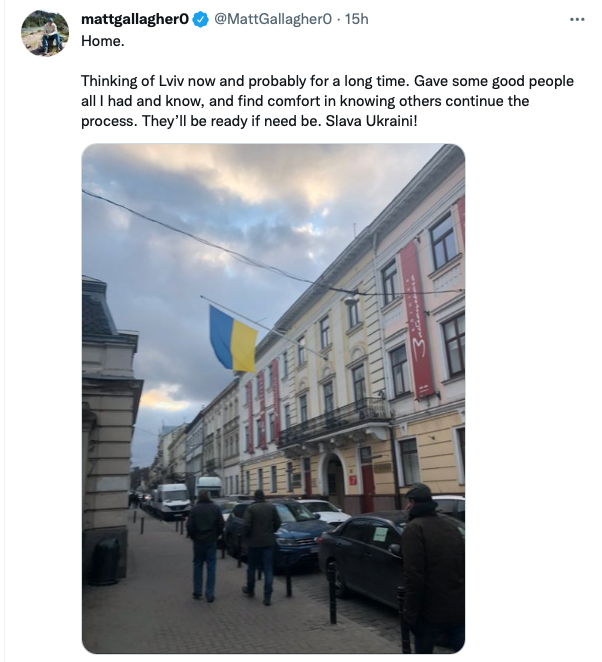 How did you get from Lviv to Poland?

By car. A local businessman had some of his women employees drive us through. It was a good reminder of how powerful an American passport is in this world and how unfair that can be, to see the stream of refugees at the border. I found a boy about the same age as my eldest. He was right by our car waiting in a line with his mom, and he was being so good and brave and that stuck with me. I gave him some money because that was all I could do.

Can you talk some more about the refugees you encountered?

The train station (in Lviv) is a big gathering point because a lot of the humanitarian aid organizations have set up shop there. Walking around in this sea of mass sadness was wrenching. You pick out a couple of people, like the boy at the border, and try to help, but you can’t do that for everybody. That’s why it is so inspiring to see all these different, great organizations doing what they can do. Something like this is obviously humanity at its worst but it’s also humanity at its best. 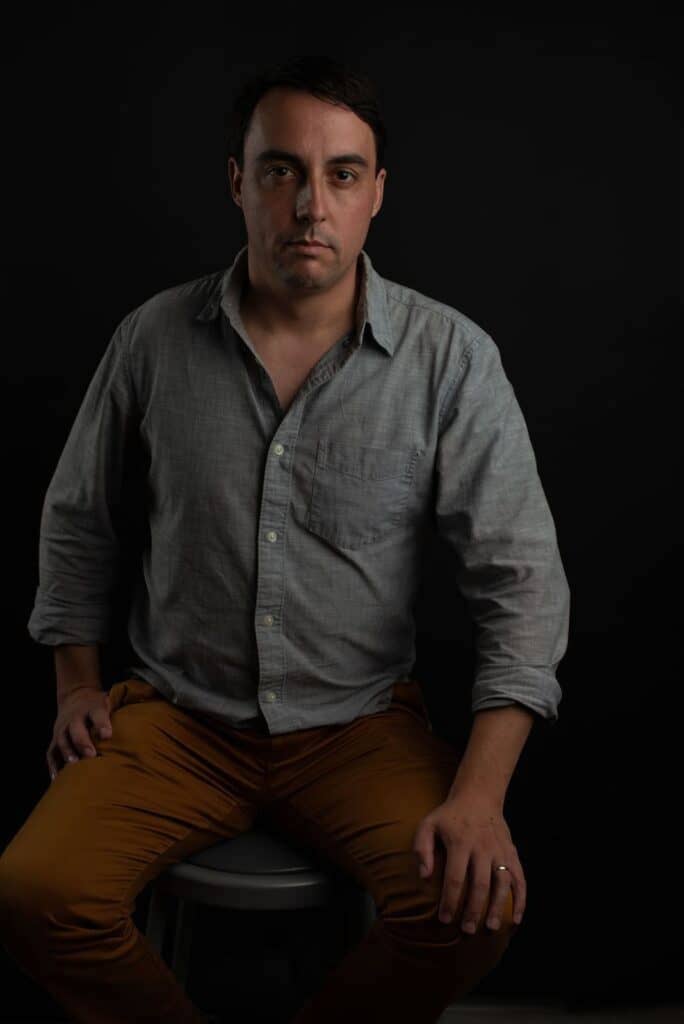 Matt Gallagher served in the U.S. Army from 2005 to 2009 and is the author of several novels and a memoir, “Kaboom: Embracing the Suck in a Savage Little War,” about his time serving in Iraq. He has lived in Brooklyn, New York, but he moved last year to Tulsa, Oklahoma, for a two-year Tulsa Artist Fellowship. He is teaching and working on his next novel.