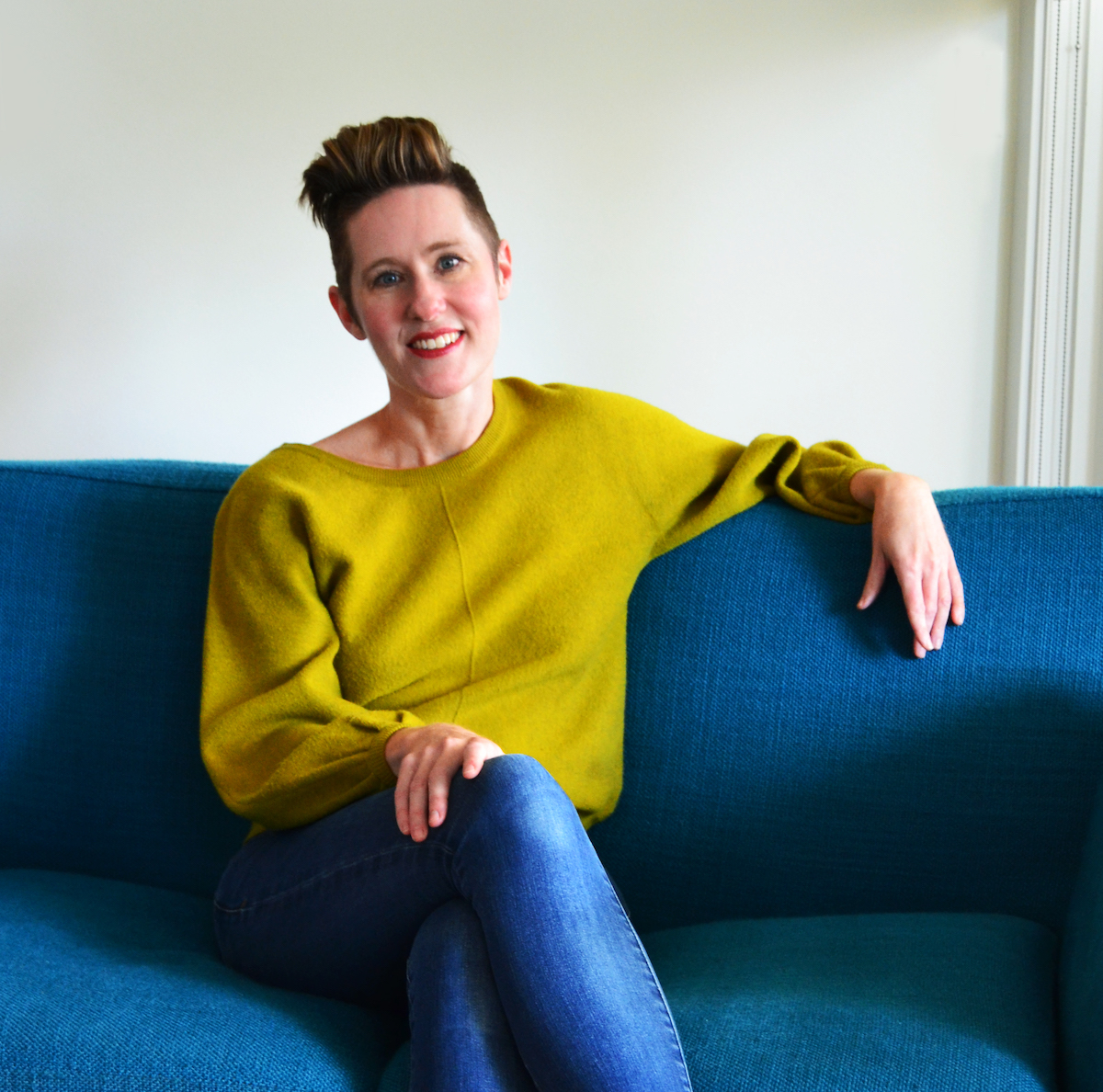 he time has come to give our sense of smell its due, says Jude Stewart (’96), and she has written a book that can change forever how you think of your nose.

Did you know that psychology research shows humans can smell others’ emotions — joy, disgust, fear? That humans can distinguish as many as 1 trillion unique smells? That measles, mostly extinguished now by vaccines, smells like freshly plucked feathers, and the plague gave off the aroma of over- ripe apples? That the scent of fresh-cut grass is an example of plants communicating with each other by emitting chemical smells to warn that they are under attack by insects (or lawnmowers)?

Stewart notes that you can improve your olfactory sense with exercises, many offered in her latest book, “Revelations in Air: A Guidebook to Smell” (Penguin Books, 2021).

Stewart tackled every question she could summon about smell, and she has no shortage of questions once she digs into a subject. She has unpacked the intricacies of color and patterns in “ROY G. BIV: An Exceedingly Surprising Book about Color” (2013) and “Patternalia: An Unconventional History of Polka Dots, Stripes, Plaids, Camouflage, & Other Graphic Patterns”  (2015), both by Bloomsbury USA.

“The topics I really like are these things that surround us, that are ubiquitous,” Stewart told Wake Forest Magazine. “They’re everywhere, but you’re not noticing them.” 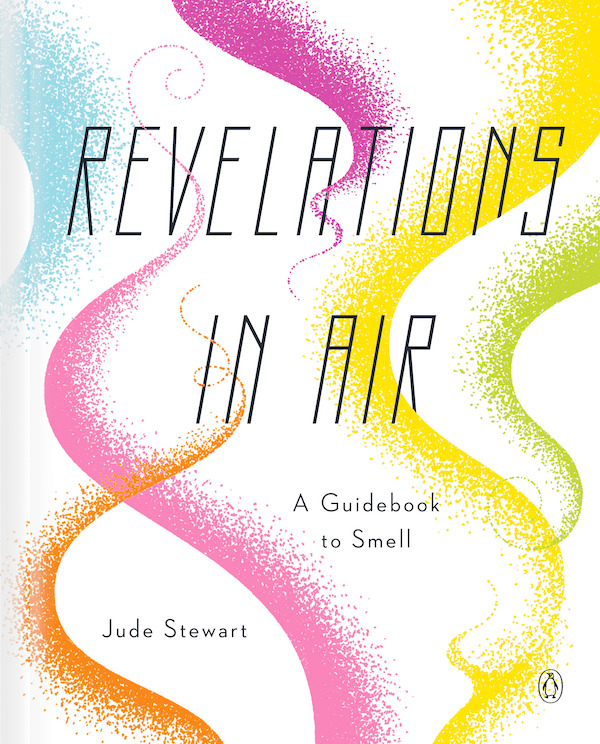 “Smell is a tesseract, collapsing space and time. It unlocks memories and grants us access to scenes we can only enter in imagination.

“Can you revisit your childhood? Not actually. But walk into your old elementary school, and you’ll be floored by how it smells exactly the same: dry chalk, wet wool, stale waft of cafeteria lunch. Sights and sounds will have changed beyond all reckoning, but smell is deep, transporting, and constant. …

“Along with its liveness, smell’s awkwardness drew me like a magnet, a fight of both pull and push. …

Stewart and her husband, Seth Brodsky (’97), met at Wake Forest, where he studied classical guitar. He became a music historian and is associate professor of music and the humanities at the University of Chicago and director of the Richard and Mary L Gray Center for Arts and Inquiry.

They live in Chicago with their son but spend a portion of every year in Berlin, an epicenter of classical music and design, an interest of Stewart’s. (She has written about design and culture for Slate, The Atlantic, Fast Company and other publications. She runs Stewart + Company, a creative agency specializing in content strategy and development.) 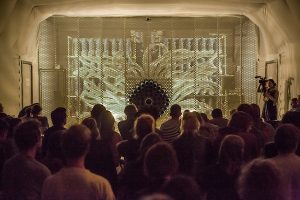 “OSMODRAMA” in Berlin, an exhibit/performance of a composition of smells in an organ created through Smeller 2.0 technology. Photo by © Julian van Dieken

The couple both speak German and lived in 2005 and 2006 in Berlin, and it was there the idea for “Revelations in Air” emerged recently.

“I basically stumbled into this, going to an art exhibit in Berlin,” Stewart says. The OSMODRAMA used Smeller 2.0, an electronically controlled smell organ that resembles a pipe organ, invented and constructed by artist Wolfgang Georgsdorf to create compositions of scents. “It could pump out a smell and then remove it from the room very quickly and then replace it with another smell. It was like being plugged into a light socket. It was exciting, but also kind of upsetting … in this way that was like, ‘Oh, make it stop,’ you know?

“I had just never thought about smell on that basis. I walked around in a slight daze afterwards.”

She began researching and discovered that the study of smell is “a very new science. There’s a lot to discover.”

She says she pursues a topic “when I find this ocean of something that everyone has access to, but very few people have thought too hard about. … Can I make this thing weird and beautiful and a place you want to hang out in for a long time?” 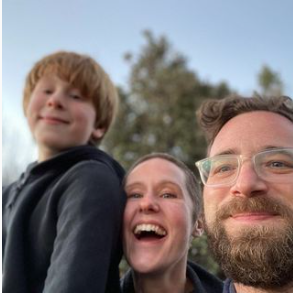 “What is the nose? Most obviously, it’s the bony edifice parked in the middle of your face. It’s a pedestal for sunglasses, an awning for your mouth that you smear on sunny days with zinc oxide. … Seen in profile, the nose sails forth in triangular glory. …

“My own nose is roman, single-humped but straight, not pierced, and definitely not small. …

“I broke my nose once, a clumsy moment in an otherwise romantic story. In college during winter break, I slogged through a heavy snowstorm to catch a train to deliver me to see Seth. … I reached 30th Street Station in Philadelphia with only minutes to spare. Beelining it to the train track, I burst through the swinging gate doors with such force, the doors smacked me back right on the nose. It hurt with a deep pain that irradiated my face thoroughly for five minutes. …

“(Today) I cannot hide my sizable schnoz. It demands acknowledgement and acceptance.” 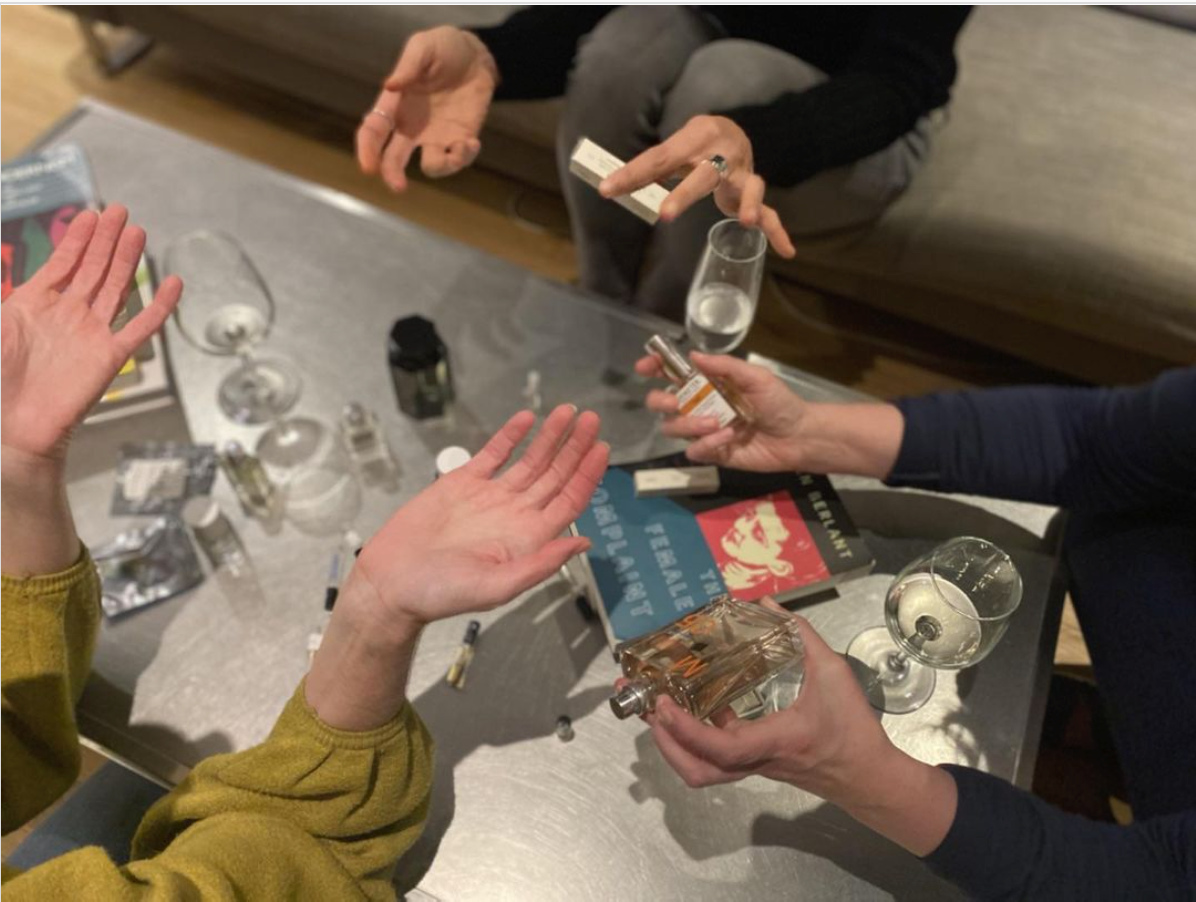 Stewart sampled perfumes with aesthetic scholars Sianne Ngai and Anna Kornbluh for a Q&A about smell for The Paris Review. Photo by Seth Brodsky ('97).

Besides meeting her husband and breaking her nose, Stewart, a Carswell Scholar, found inspiration during her Wake Forest years. As an English major, hearing Provost Emeritus Ed Wilson (’43, P ’91, ’93) reading poetry aloud in his English classes made her strive to be sure her own writing could be read aloud with impact. She drew inspiration from the teaching styles and friendship of Tom Phillips (’74, MA ’78, P ’06), who retired in 2020 as associate dean and director of the Wake Forest Scholars program, and Professor Emeritus of History Jim Barefield. Studying in London her sophomore year with the late Professor of Art Bob Knott exposed her to great art.

“I hung out with the arts crowd a lot. I was on the radio, as I think every nonconformist art kid at Wake Forest used to be, back in the day — a lot of ragtag folks who were super smart and great,” she says. 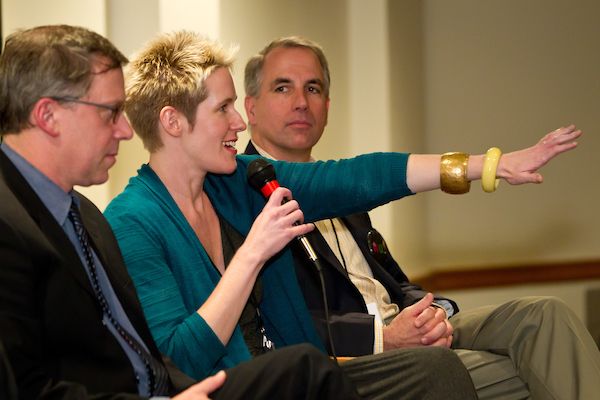 Stewart at a panel discussion during Wake Forest's Words Awake! conference in 2012.

Once she began sniffing into the world of smell, Stewart concluded that our olfactory sense has faded from modern sensibilities as vision dominated.

“We are all walking around with our little phones everywhere, and it’s so much of a feeling of disembodiment as we walk around the world with screens, screens, screens. I think a lot of us crave this feeling of ‘I don’t want to be a brain in a jar. I want to live an embodied experience. I want to feel that I’m actually here right now.’” 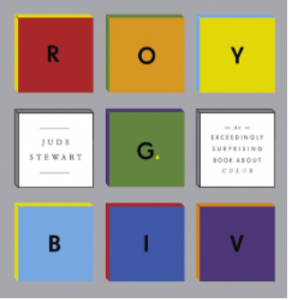 Society’s recent love affair with podcasts confirms that she is not alone. “This wonderful quality of intimacy, this feeling of just turning your eyes off and just listening to people talk is really soothing and great and a wonderful way to take in stories.”

The loss of smell that plagues some people with COVID-19 brought a new focus on the nose’s value.

“Literally millions of people suddenly became aware of what it would mean not to have a sense of smell. There’s a well-cited statistic of some survey where people were asked, ‘If you had to give up a sense, which one would it be?’ People are very ready to kick their sense of smell to the curb. But that was pre-COVID. Now when people go through this experience, … it’s very far-reaching what their feelings are,” she says.

Many people regain their sense of smell within 10 days, but some go for months before it returns “kind of weird and distorted, and they don’t smell flowers,” Stewart says. “They smell something gross for weeks on end. What they describe is a sense of depression and unreality, and your wife doesn’t smell like your wife; your kid doesn’t smell like your kid; your food tastes like nothing at all. People gain a lot of weight or lose weight because they either aren’t interested in eating or they’re eating just desperately trying to get something to register. … That is all kind of testament to how important this is to our everyday well-being.”

What Stewart most loves about smell is its immediacy. “They can’t send smells over the internet. We are nowhere close to that technology. … Electronic noses do exist, and they can passively monitor smells. But … I can’t send you a smell. … You have to be physically there. It’s a brief experience that pins you in a moment. … And when it’s gone, it’s gone …. That is bracingly different from the life of the screen.”

Stewart says she enjoys the challenge of structuring a book with encyclopedic possibilities. 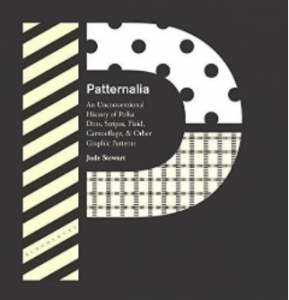 “It’s important to acknowledge that a lot of us read non-linearly. … So you could open up and hop around if you wanted, but I also wanted each chapter to have this quality of a meditation that if you just wanted to take in 1,000 words about some smell … it would be a really satisfying experience.”

Each chapter begins with her evocative perceptions about a particular smell, from fresh-cut grass to peanut butter to stinky cheese.

She then weaves history, science, idiosyncratic facts and cultural phenomena, including negative roles in racial or religious discrimination, into the story of that smell. And she calls on her own memories.

“For me this smell reaches back eight years, to when my son, Lev, was born.

“He smelled thrumming and warm, a tiny meticulous engine. … In one big inhale, you could take in the scent of his little toes all the way to his head, tufted with curly dark-red hair. The notes I detected — fresh milk, a powdery dryness, smears of creams and unguents, crisp clean laundry not yet sodden — are the smells of care, the nonstop roundelay of keeping a little person alive and well. What a new baby really smells like is an otherwise impossible mixture: astonishment with contentment.”

Stewart’s suggested exercises to strengthen smell range from keeping a journal of the smells experienced each day, pulling out items to sniff and ponder in your kitchen, comparing similar smells with your eyes closed, perhaps with a friend, or using language to describe smells precisely, whether they inspire a deep breath of joy or a wrinkled nose of dislike.

“It’s so iconic, this smell, so recognizably itself that it takes time to actually observe its details. At first the smell of roses fills the nose in a giddy rush, sweet and headlong. The burst of luxury feels total. But that rush rapidly settles down and shades into a regal stillness. …

“This scent’s wildness doesn’t stay wild for long in the nose; inevitably, one recalls one’s grandmother in her church best. … It evokes late summer, lazily crawling insects, the finery of silken petals rotting under a bush, the sprawl of untidy nature.”

Stewart hopes readers will appreciate smell’s readiness for prominence on the cultural stage.

“Smelling demands concentration and openness, qualities many people are keen to recultivate…” she writes. Of her book, she writes, “I want it to entrain your curiosity in an ever-widening arc, plumb the strange outer limits of smell, and take seriously what many consider a deeply unserious subject. I want to lean into the corniness of smell, too. … Smell is perfectly gonzo.”