Editor’s note: Wake Forest Magazine learned of the tribute paid to Provost Rogan Kersh (’86) at a recent University Board of Trustees meeting by trustee and chair of the board’s Academic Committee Jeanne Whitman Bobbitt (’79, MBA ’87). With permission, the magazine is sharing the remarks. Kersh steps down as provost at the end of June. He plans to travel and teach abroad for a year, then return as Distinguished University Professor. — Maria Henson (’82) 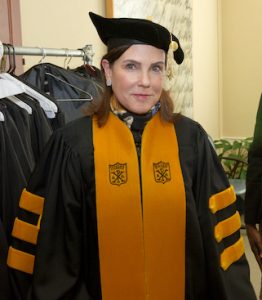 Indeed, each of us has our “Rogan stories” and observations — the emails returned at 2 a.m. on a fairly regular basis, the equal likelihood of running into him at — pick one — the Metropolitan Opera, Wake Forest’s own Unbroken Circle or on the street in a Tuscan village. If you know Rogan, your proverbial Six Degrees of Separation have good odds of being reduced to two degrees; that is, if you meet someone randomly on a street in Paris, the odds are good that an acquaintance of your new acquaintance knows Rogan — and has been on a panel with him. Rogan’s knowledge of politics — his academic discipline — and world affairs make him a formidable participant in almost any political conversation — as well as Chelsea Clinton’s thesis supervisor once upon a time. As one observer noted, “if anyone was going to know the name of the President of Ukraine before the current horror unfolded, it would be Rogan.” 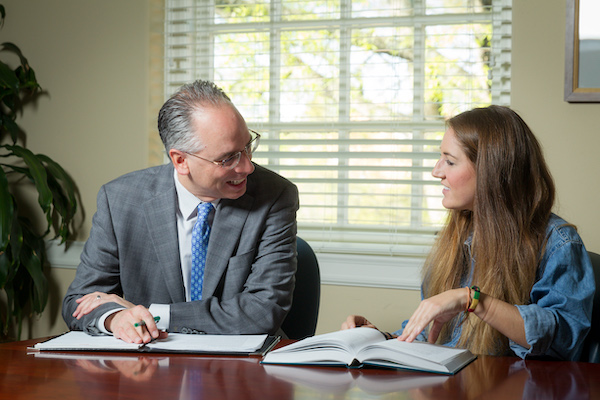 Kersh and Kendall Stempel ('14) when she was a senior.

Wake Forest’s shaping of Rogan — and his of Wake Forest — began long before his return in 2012 as Provost under Nathan Hatch. That molding in fact issued from Brevard, North Carolina, where Rogan had been installed after a difficult family time. So, after the most cosmopolitan of beginnings for Rogan in his birthplace, New York City, to Brevard, after a near-Odyssean journey, including, appropriately, a two-year boyhood stint on the Island of Crete, Rogan’s world was, in his own words, “shrunk” — but perhaps also intensely focused in the quiet and inward-turning mountains of his high school home. The qualities of both places — a savoir-faire comfortable in virtually any city in the world — and an abiding sense of place, an ability to find roots no matter where he found himself — were Roganesque qualities from the beginning. 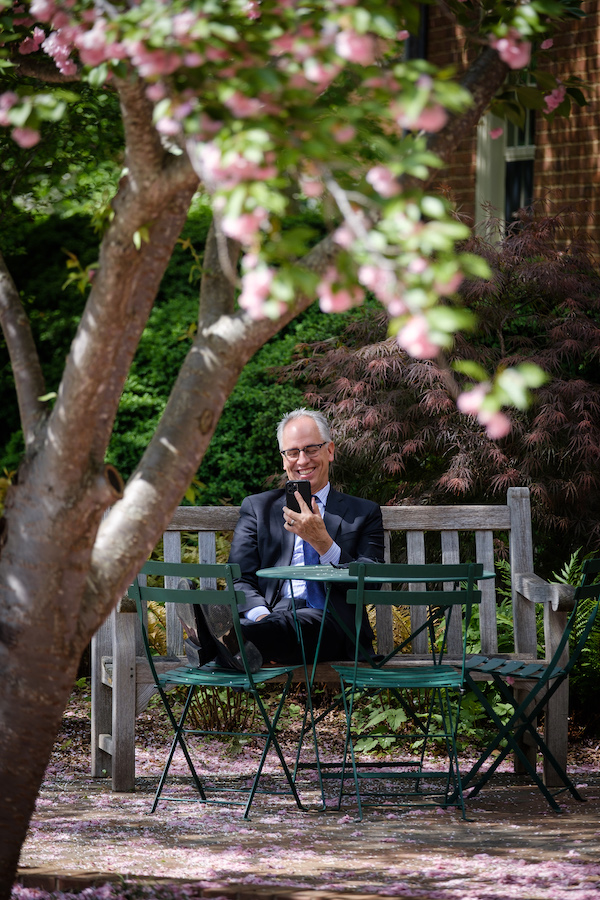 Already “politic” and politics were in Rogan’s blood. As a Wake Forest undergraduate, he was an academic rogue of sorts, who bedeviled and beguiled — and occasionally got a comeuppance from — some of our most erudite and reverently remembered members of faculty, among them, Tom Phillips, the late Don Schoonmaker, Jim Barefield, and the incomparable Germaine Bree, who had been friend and contemporary of Albert Camus. He studied with Barefield in Venice, where Barefield notes that Rogan embedded himself in the workings of that ancient city more than any student Jim had ever had — and I think Jim did six terms in Venice. Rogan immersed himself in city politics, observing and writing on the local elections with a perspective informed both by study of the issues and numerous conversations with Venetians. Later, as a Luce Fellow, he studied in Japan and then went one step further, as Rogan is wont to do, and became for a time an assistant to a former premier of Japan.

Rogan went from Wake Forest to two master’s degrees and a Ph.D. in politics at Yale, then to faculty appointments at Syracuse and NYU. Even so, he returned year after year to Wake Forest, spending countless hours in interviews and in building relationships with students, painting for them as a part of the Reynolds Scholarship selection committee a picture of the best the University has to offer. Students have been and always will be the heart of Rogan’s effectiveness — as Board members, we came to understand the value of a chief academic officer who genuinely engages with and understands today’s students. We all like to talk about college when we were there. Rogan insists that we talk about college for today’s 19-year-olds.

When Rogan returned to Wake Forest in 2012 as Provost, he came full circle to his first academic home. Charged with decanal direct reports, quality of academic offerings, and wellbeing of faculty, he continued to teach, to write, and to lead the heart of the University in a fraught time in the broader University world. A political scientist himself, who expanded on the idea of health as a political good — and in so doing became an expert on the toll of obesity on the American public and economy — he also expanded the idea of the liberal arts. 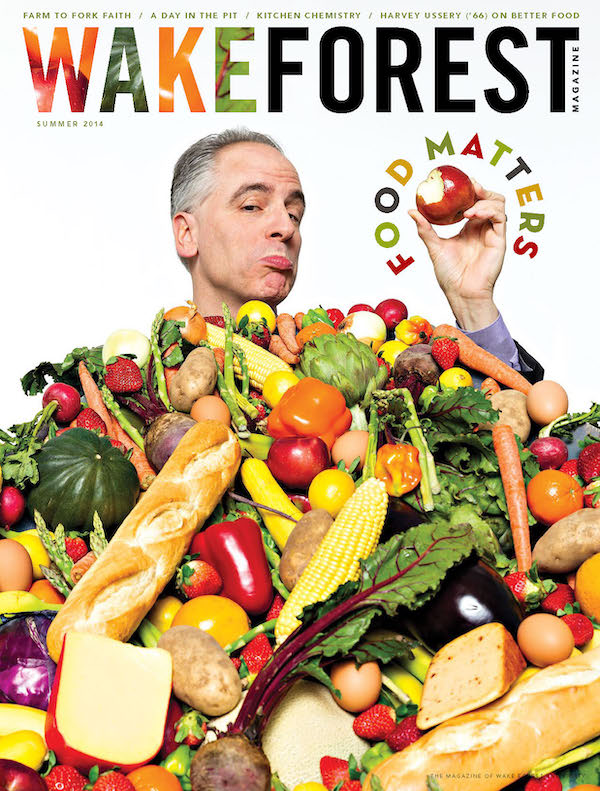 Kersh on the cover of the "Food Matters" Summer 2014 issue of Wake Forest Magazine.

Many have argued that the liberal arts are a “good to have” for their center on values and the public good; Rogan always sees the liberal arts as a “must have.” In an information-loaded and post-global world he sought to claim for Wake Forest the interface of science and technology with the traditional liberal arts. In a presentation to the full Board, Rogan advocated for Wake Downtown — still a concept at the time. He promised a shuttle system that would deliver students by the dozens to a new downtown campus in ten minutes flat. He promised that faculty would leave the familiar Reynolda campus to teach them. He promised that we could manage enrollment growth of 500 new undergrads, many of them studying downtown or overseas so as not to increase the burden on the College faculty and staff. And he promised that this enormous undertaking would not wreck our budget, but would add to our bottom line. Those of you on the Board at the time will remember a rare standing vote of affirmation. And all of us at this time can see the resounding success of that daring enterprise. 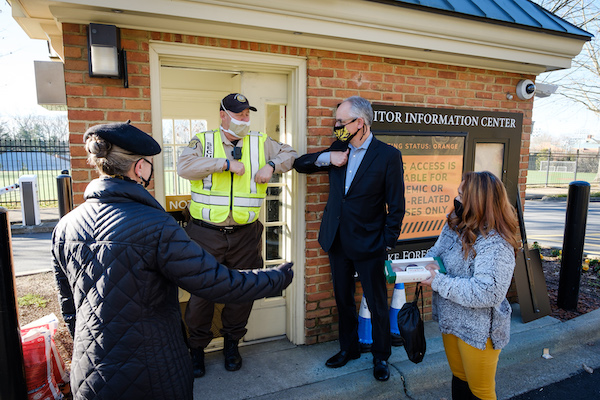 Kersh visits campus police officers and security guards in March 2021 to thank them for their pandemic service.

At the same time, Rogan championed the Arts in the University’s planning. As one faculty member put it, Rogan eliminated the “hierarchy of priorities” at the University’s academic heart. That same faculty member noted Rogan’s advocacy of individuals and of their work. “He shows up for things,” she noted. “If a faculty member is involved, he shows up.” As another put it, “he reads our books; he knows our work. He supports our careers and advancement.” As still another of Rogan’s colleagues put it, “his way of working is a way of being; there is a joy in the room when Rogan is there.” 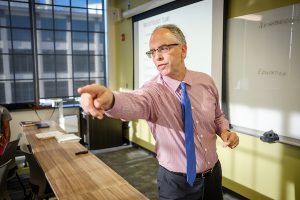 Kersh teaches a class at Wake Downtown in April 2017.

For all the academic innovations that Rogan led, perhaps his most testing hours have been as we wrestled with the complex issues of the last decade — free speech, our history as a Southern school, flashpoints around race, gender, and religion. Time and again, he has been at the center of Wake teams working through issues and providing a steady hand. During COVID, he has held together the faculty and our academic offerings, appearing before Town Halls with faculty members to reassure, motivate, cajole or just let people unload — with the Provost in the crosshairs. The Faculty Team that Rogan built in response to the circumstances of COVID speak to who he is and how he leads. The classes met and supported, the herculean efforts of some faculty members to meet expanding student needs, and their generous support of their colleagues understandably fearful of a COVID world are in large part the fruits of Rogan’s hearing concerns, finding solutions, and sometimes, just abiding with the fearful.

"Betting on people is a Wake Forest way; people, their temperaments and values, are the heart of Wake Forest that Rogan exemplifies."

Rogan bets on people. People are exhilarating, fascinating, oxygen, to him. Institutions bet on circumstances, on the larger environment and the institution’s ability to anticipate and adapt to it. Betting on people is a Wake Forest way; people, their temperaments and values, are the heart of Wake Forest that Rogan exemplifies. He represents the very best of Wake Forest, indeed, what we aspire to — intellect, imagination, superb scholarship, and generous heart.

Other schools are stronger academically, more competitive athletically, richer in endowment per student, even more aesthetically beautiful. Wake Forest’s special DNA has always been its ability to form networks from competing interests and groups. Wake Forest is about an alchemy that takes the daily stuff of life and makes it the gold of human connection and humane values. Through the University’s history, there have been alchemists who in the most unlikely of circumstances still spun intellectual and even spiritual Wake Forest gold.

Rogan Kersh is one such figure in a pantheon of Wake Forest leaders.

Jeanne Whitman Bobbitt (’79, MBA ’87) lives in Dallas and is on the Wake Forest Board of Trustees. 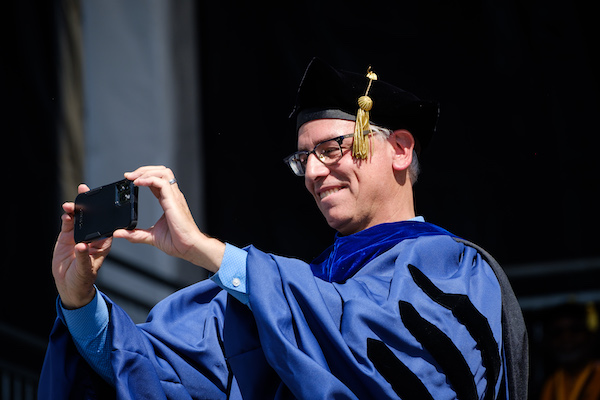 Kersh takes a photo of the Class of 2022 at Commencement.