TWO WAKE FOREST MENTORS. Two different voices that helped me listen, pay attention and find my own voice. They have stayed with me for life.

I wonder where I was going before I took a course in British Romantic Poetry with then-Professor of English and Dean (later Provost) Edwin G. Wilson (’43, P ’91, ’93). I’ll never know, but I vaguely remember the young man I left behind. 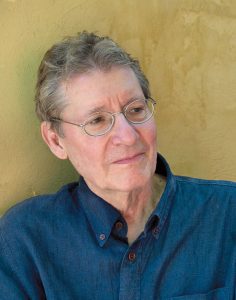 It was the beginning of a new semester. On our first day of class, we’d been assigned to read the beginning of Wordsworth’s “The Prelude.” My eyes glazed over as I read it in my dorm room. Obsolete diction — words like “yon” and “methought” — exhausted me. I didn’t want to read these words. Their time was past, way past.

But something happened in class when Dr. Wilson read the opening lines of the poem. I heard the poet speaking, as if he were in the room. A young man, Wordsworth, had just escaped from London, a dark city where he’d been “a discontented sojourner.” Now he was reeling with joy as he listened to murmuring water and observed a wandering cloud.

Unlike some of my professors, Dr. Wilson didn’t possess a theatrical personality, and yet his voice found the conversational cadences of the poem and its thoughtful pauses. “The Prelude,” I suddenly realized, wasn’t a venerable, literary monument. It was simply the voice of one human being speaking to another about the common condition of longing.

Later in the semester, Dr. Wilson read Keats’ “La Belle Dame sans Merci.” His reading was strangely toneless, capturing the spirit of a man broken by an irretrievable dream of enthralling love — a vision of wounded desolation, a knight “palely loitering” in a bleak landscape where no birds sing. These are moments you cannot forget. Two years later I wrote my master’s thesis at Columbia University on Wordsworth, and 10 years later I named my son John Keats Rosenthal.

Until he died in 2019, James H. “Bill” Walton, the director of the Wake Forest College Theatre (from 1956-65), never stopped encouraging me to remain true to myself, no matter what the cost.

Walton’s title was instructor in the speech department, and he taught speech and acting, but his real business was dispensing human possibilities. He was less interested in his students’ grade-point averages than in how much they dared and how much they cared.

In his Oral Interpretation of Literature course, he would tell students not to “hide,” not to respect their own modesty. Once he said, “A wallflower at a dance is the largest ego in the room.” To his way of thinking, and Thoreau’s, most people lived lives of quiet desperation — hiding from each other behind false courtesies and conventional thinking.

When he cast me as Hamlet and in “My Fair Lady” as Henry Higgins, he was less interested in my performance — he figured I’d be good enough — than in the purity of my focus. His motto, expressed in a thousand ways, was “No Excuses.” What sort of teacher teaches something like that?

A few years after I graduated from Wake Forest, Walton told me that he and his kids had spent the summer working on a half-acre garden at his family home in South Dakota. But just as everything was beginning to bloom, a huge storm blew through the Midwest and destroyed the garden. I said, “How awful!” Walton laughed and said, “No, Johnny, just the opposite. It was wonderful. Think of what they learned.” That was pure Walton. He believed that loss and disappointment were built into human experience, and we shouldn’t pretend otherwise. He wanted to teach failure and the growth that comes with it.

Professors Wilson and Walton, who approached teaching from such different perspectives, had a special friendship. They recognized in each other a rare dedication to the unknown and mysterious potential of students. More than half a century later, I still live with their voices and the effect of their words.

John Rosenthal (’64) lives in Chapel Hill, North Carolina, with his wife, Paula. A writer and photographer, his work has been widely exhibited throughout the South and Northeast. Two collections of his photographs — “Regarding Manhattan” and “AFTER: The Silence of the Lower 9th Ward” — have been published by Safe Harbor Books, and his memoir, “Searching for Amylu Danzer,” was published in 2021 by The Waywiser Press.