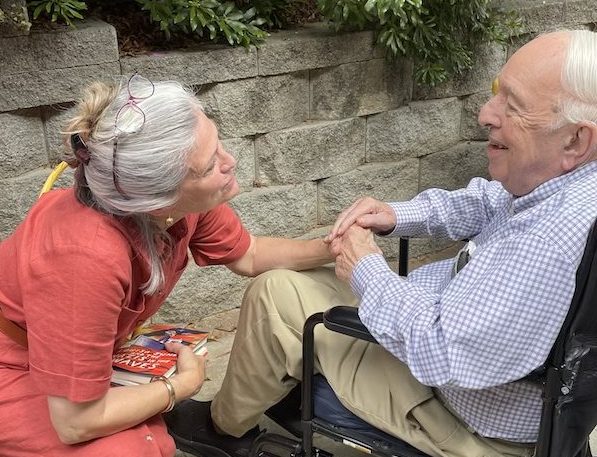 If we feel a story, we remember it, says Laura Malone Elliott (’79). Her 20 years in journalism and nearly 20 years writing award-winning historical fiction for young adults taught her that. 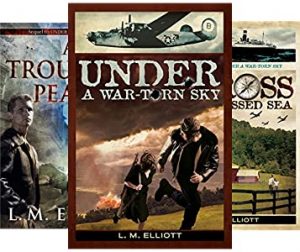 A native of Virginia, Elliott wrote for Washingtonian magazine before publishing her first novel, “Under a War-Torn Sky” (2001), named a Jefferson Cup Honor Book and a Notable Social Studies Trade Book for Young People. Her historical novels, written under the name L. M. Elliott, span from the Italian Renaissance to the Cold War. She has also published a contemporary novel, “Storm Dog” (2020), and five picture books, including “Hunter’s Best Friend at School,” a Children’s Choices winner.

Historical fiction can humanize events and statistics that may feel far away, Elliott says, and help young people better understand a time period. She uses story to teach readers about war, disinformation and mental health in ways that bring them into a closer view. 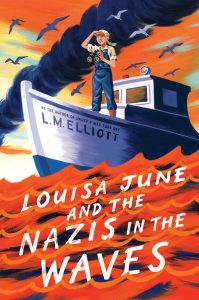 She says she hopes readers of her newest novel, “Louisa June and the Nazis in the Waves,” will enjoy the inspiring and amusing cast of characters — Cousin Belle and Butler and Mama and Louisa June, of course — and absorb the history of this home front tale during World War II in Virginia. She also hopes Louisa June, who navigates sudden loss in her family as a young teen, will help those who are experiencing loss themselves. For those who have been luckier, perhaps they might look at their friends who have gone through loss “with a little bit more patience, a little bit more empathy, a little bit more willingness to not be unnerved by the loss,” Elliott says.

Deputy Editor Katherine Laws (’20) spoke with Elliott about history, writing, mental health and “Louisa June.” Excerpts have been edited for length and clarity.

KL: I’ve heard you say the pandemic inspired “Louisa June.” How did you see the connection with World War II?

LE: In the research for (“Across a War-Tossed Sea,” 2014) I discovered so many amazing things that I didn’t know about, like these U-boat attacks, but it didn’t fit into the timeframe of that novel. And I’ve been sitting on that information for almost a decade, wanting to write about it.

The first six months of 1942, immediately after Pearl Harbor, Hitler declared war on us, and he sent this wolfpack of five U-boats that he ordered to take down every freighter, every cargo ship, every tanker they could find, and we were totally unprepared for it. (People) didn’t know about these merchant mariners, who kept the cargo, kept the fuel and the medicine and the armaments and the parachutes and everything going. They would reup more often than not, as young as 16 and as old as in their 70s.

As I was writing it, COVID was just starting to really rage. Of course, we didn’t know what was coming, how bad it was going to get, and how kind of surreptitious and capricious it was in terms of striking down people.

In some (of my books), finding a way to talk about current day issues, but in historical time periods, takes the heat of immediacy out of whatever issue you’re trying to talk about.

With Louisa June, I realized in terms of suddenness and unexpectedness and the fear, there wasn’t that much difference between these submarines, lurking in the waves and suddenly rising up to take down a ship, and this horrible onslaught of this virus.

KL: You’ve alluded to themes of loss and grief in “Louisa June.” Say more about that.

LE: There are more than 200,000 American kids under the age of 18 who lost their primary caregiver during COVID — father, mother, grandparent they were living with. I hope Louisa June’s journey through her own finding her way again can serve as inspiration. 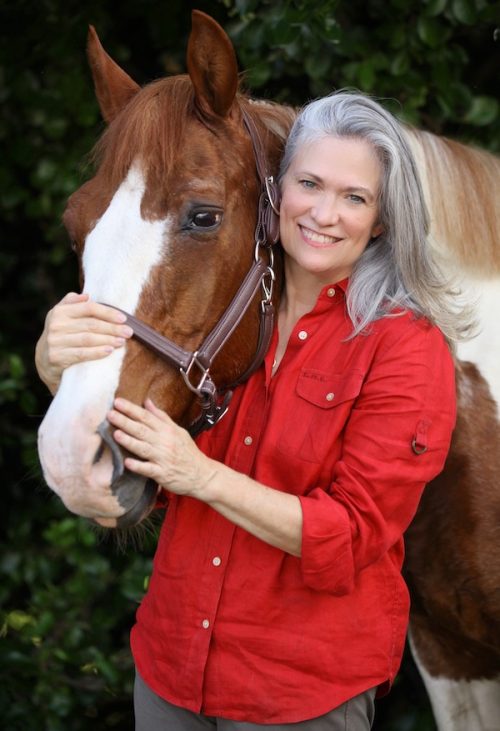 Laura Elliott stands with her sweet 22-year-old horse, Tinker, in a portrait for her novel, "Bea and the New Deal Horse," which releases in March 2023.

KL: Why is it important for young people now to be hearing stories they can identify with?

LE: We talked about COVID, but the other thing that’s really happening right now is this huge surge in mental health issues for all ages, stemming from COVID, and for teenagers and adolescents and college-aged kids who have missed so much — the usual socialization, the usual mentoring eye to eye, person to person by a teacher or an older friend. There’s a sense of foreboding and a sense of uncertainty. And there’s a loss of safety. The politics right now are so volatile and angry and vitriolic and abusive, often, in language. It’s an awfully difficult time to be an adolescent.

So if people can find in a book someone that they identify with, and that character happens to have an experience that really resonates with the reader, and that character works through it in such a way that is successful, whatever degree it is, even if it’s just a little bit, the reader can (say), “Oh, maybe I could do it that way,” or “Maybe I could think about it this way.” 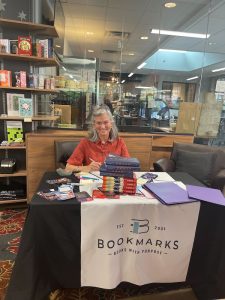 Elliott at her Bookmarks talk and book signing

KL: What can “Louisa June” teach us about mental health?

LE: Louisa June’s mother already has melancholy — this low-grade, kind of pervasive depression that she fights, which is horribly exacerbated by the loss of her son. There is that thematic, how do you help a loved one? How do you recognize when you, as helping a loved one, could also use a little tender love and care yourself? What is emotional wellness? How can you buoy yourself up? When should you reach out for help?

When you read the story, there are a lot of those kind of proactive things that mental health experts talk about, in general, (that) heighten your emotional health and resilience, which is time with friends, doing things that you love, proactive life preservers as it were, that helped lift you. Cousin Belle occasionally speaks in some wonderful truths that I hope help.

And there’s a lot of fun stuff in there too. There’s a pig chase; there’s a search and rescue. It’s not just all sad stuff!

KL: Why is education about mental health important to you?

LE: I have always been on this little bit of a mission to raise awareness about mental health. When I was at the Washingtonian, I wrote about depression and anxiety and eating disorders and sleeping disorders and things like domestic violence.

My mother suffered terrible depression when I was young. I want to raise awareness about this so that people get the help that they need. (She notes statistics showing that people often first experience mental health issues in late adolescence but can take an average of 11 years to get help.) 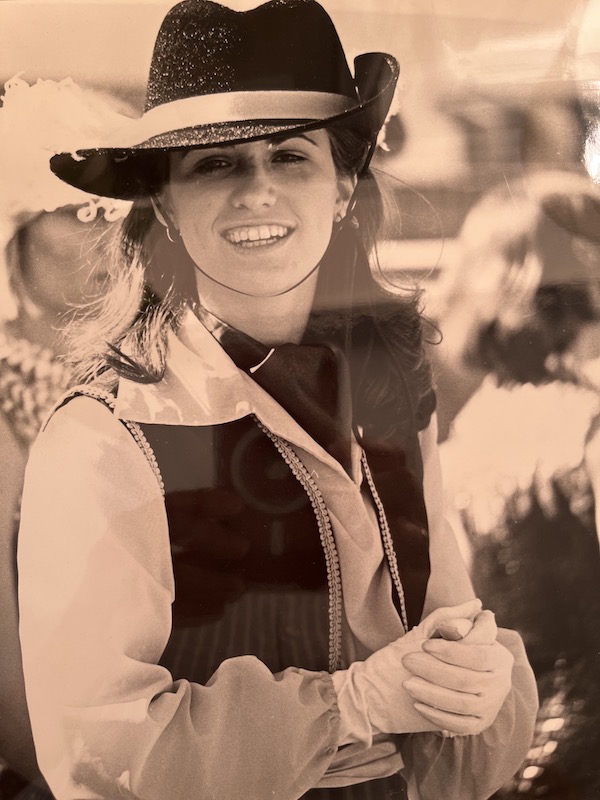 At Wake Forest, Elliott led the Spirit of the Old Gold and Black marching band as the field conductor.

KL: I’ve noticed that you make many literary references in your books. Is that a nod to your classes at Wake Forest?

LE: Oh, a lot of them, a lot of them! I always slip in a lot of literature references and musical references because if they’re going to read, I want them to learn something! (She dedicated “Storm Dog” to Provost Emeritus Ed Wilson (‘43, P ‘91, ‘93) because Ariel, the main character, finds herself in nature and calls the song of the catbird “nature’s jazz improvisation star.”) Finding that sublime within the simplest of nature or the most magnificent… came straight from Dr. Wilson’s Romantic poetry class. (In “Louisa June,”” her brother is named Butler because their mother loved William Butler Yeats.) Wasn’t I lucky to be able to have those influences from Wake?

KL: Where does your interest in history come from?

LE: People often are surprised that I’m not a history major, but I’ve always loved history. And honestly, if we go back to everything that Wake Forest did for me, it taught me to be intrigued and delighted by all sorts of things, all sorts of subjects, all sorts of stories.

When I was at the (Washingtonian) magazine — I am no science person at all — I was doing human interest stories. I was also doing things like covering a young mother who had the first bone marrow transplant done in Fairfax County to treat breast cancer. I was fascinated by the whole idea of spinning stem cells, and why you would use that to try to treat and boost a person’s immunities. Wake Forest taught me how to research, to ask questions, to never stop being curious, and to not be intimidated by, “I don’t know anything about that.”

“Obviously she was brilliant. …She was a delight to have in class and a pleasure outside class, and everything in between… a remarkably gifted woman,” said Provost Emeritus Ed Wilson (‘43, P ‘91, ‘93), who taught Elliott.

LE: What takes me longest is my research. That’s the fun part — the treasure hunt. I have to make myself stop. But if I’ve done thorough research, I can sit down and write 1,000 words a day if I need to, on deadline, day after day. That’s from having been in journalism. 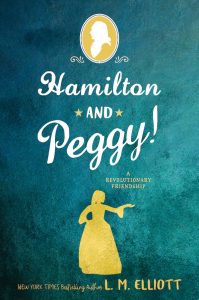 I always say this to kids, that primary documents are the most amazing things because that’s when people from the past sit down and whisper in your ear — (with) either letters or photographs or even things like medical instruments that people would’ve used.
(She notes that letters from Revolutionary statesman Alexander Hamilton to his wife, Eliza, about her sister, Margarita “Peggy” Schuyler Van Rensselaer, provided the inspiration and details for Elliott’s 2018 book “Hamilton and Peggy!” Elliott learned from the letters that Peggy was an early feminist, spoke French fluently and taught herself German by reading her father’s engineering manuals.)

She was called a “wicked wit.” She was a favorite at dinner tables and balls and had “a rare accuracy of judgment for both men and things.” In his love letters to Eliza, (Hamilton) drops all this gossip about Peggy! Those letters are wonderfully angsty and full of braggadocio and snippets of poetry and a lot of vulnerability.

You have to have your antenna up at all times as a writer and just be watching and listening. My research tells me what to write. I don’t conceptualize and then look for things to corroborate what my opinion is. And that’s having been a reporter for so long. Facts tell me what the story is and what the parable, the lesson, the what’s going to touch us in those facts. 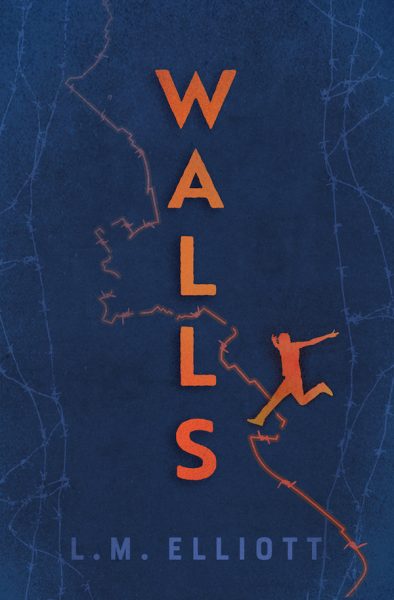 KL: Why do you love writing for teenagers?

LE: I love eighth (and) ninth graders because (they’re) just, like, “why, why, why, why?” And history helps explain how we’ve gotten to where we are. …

I really love writing for teenagers because they want truths. Don’t sugarcoat anything with teenagers — they’ll throw your book out the window! But it needs to be laced with just a little bit of hope and a little bit of reassurance that there are people, even in this malaise, there are people who stick to integrity, who hold up that candle of either kindness in the face of cruelty, compassion in the face of hatred, that they have made that little inch of a difference. And if we all make a little inch of difference, things move forward.

You can find more information about Elliott’s books, as well as learning resources for readers and teachers, on her website at lmelliott.com.

Elliott’s next book, “Bea and the New Deal Horse” comes out in March with HarperCollins. It’s a depression-era story about Beatrice, 14, left with her little sister at a horse farm in Virginia by her father who can’t find work. She finds help there in connecting with a fiery and dangerous but talented horse.