Hex Li (’22), a sociology major with a minor in anthropology, doesn’t hesitate to forge ahead when an idea takes hold.

Li, a native of China, decided early on that the educational system in Beijing did not work for her learning style. She made the adventurous move at age 15 to a small boarding school in New Hampshire, without her parents, who had two businesses to run, and her two brothers. She did well and chose Wake Forest for higher education.

Li is aware that she doesn’t fit the perception many people hold of Chinese students as quiet, conforming or introverted.

“I’m not sure if my English is good enough,” says Li, who was a senator in student government at Wake Forest, “but I talk a lot.”

Thanks to strong mentorship in sociology and four classes with the head of the Timothy S. Y. Lam Museum of Anthropology, Li has crossed another boundary with a bold idea. 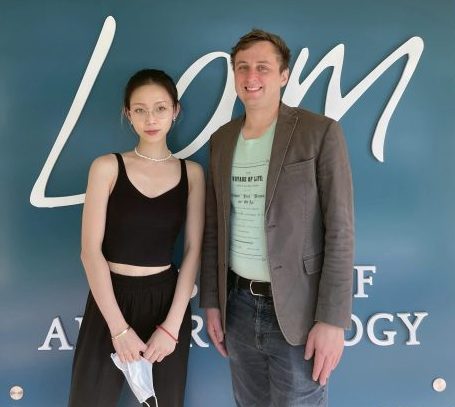 Li with Andrew Gurstelle, academic director of the Lam Museum of Anthropology. Photos courtesy of Li.

Li has created and curated an exhibit at the anthropology museum, its first based on original ethnographic research by a student and about students, says Andrew Gurstelle, the museum’s academic director and an assistant teaching professor of anthropology. The exhibit ventures more into journalism than scientific research that can be generalized, Gurstelle says.

“It was very different than what we typically do,” he says.

Li’s exhibit is called “Guī Shù Gǎn: Between Belonging and Isolation in the WFU Chinese Community,” which opened in May and continues through March 3. She explored how 10 Chinese students dealt with creating belonging, confronting isolation and bringing reminders of home to their campus environment.

Gurstelle supported Li’s exhibit idea, even though it was challenging. “It was very difficult, and I wouldn’t have done this with any other student except Hex, honestly. … Normally students only make the exhibit. They don’t have to do original research. She bit off a lot. Of course, she is never going to take the easiest route. She’s going to take the route that she thinks is the best.”

He says the context of being Chinese and an international student during the pandemic is unique. “It does speak to a very specific moment in time that Hex was able to capture,” Gurstelle says.

Managing Editor Carol L. Hanner talked with Li, who is now in graduate school at the University of Pennsylvania, about her journey to Wake Forest and what led her to create the exhibit. Excerpts have been edited for brevity and clarity. 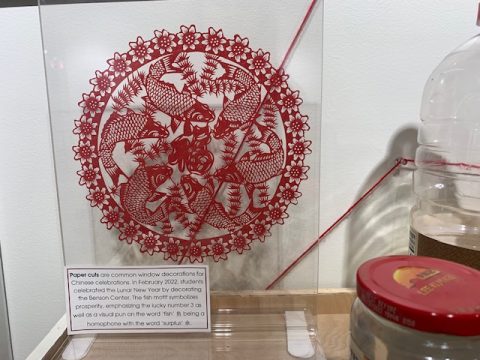 Red paper cut designs are a symbol of home for many Chinese students.

Q. What is your area of study in graduate school?

The program name in the Graduate School of Education is “Education, Society and Culture.”  It’s basically the mixture of sociology and anthropology.

The reason why I wanted to go to grad school is I want to give myself more time before actually going into society. I have plenty of internship experience in the business area. (She held three summer internships at ByteDance, a Chinese platform company that founded TikTok. She focused on product globalization, sales and business strategy.) Right now I feel it’s very important to study theory, (to gain) more understanding toward the world.

Q. How did the exhibit come about?

Dr. Gurstelle has been one of my favorite professors. He was my freshman adviser, and he has been extremely helpful to me and especially as he’s an anthropology professor, he understands culture very well, especially how to manage with students who have multicultural backgrounds. I took all of his classes offered at Wake Forest. We’ve always talked because my dad’s undergrad major is anthropology, as well. We talked about internships, but I wanted more “me” into the museum. So, in my senior year, I decided to say, “What about me putting up an exhibit?” 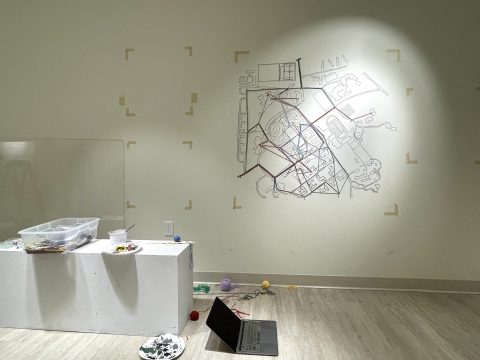 Q. I understand you changed from the initial topic of the exhibit.

The first idea (that) came to my mind is mythical creatures, because I just love dinosaurs. That was my go-to when I was little. (I changed the topic) because of the pandemic. When the pandemic hit, a lot of the racial tension became more intense (with the COVID-19 virus having come from China.) I encountered something in our campus which let me feel very uncomfortable. And as I spoke to many of my friends, I resonated with (their comments) a lot. I was, like, “What about doing something about me and my group of people?” and that led to the ultimate topic of the sense of belonging. 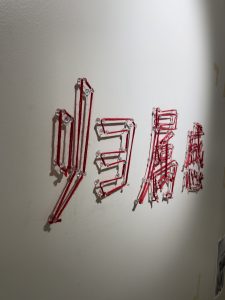 (She also had close mentorship bonds with sociology professor David Yamane (P ’16, ’22) and associate professor Hana Brown.) They’re two of my other favorite professors. I will keep in touch with them forever.

I really want to highlight the first class — a (First Year Seminar) named “Who Lives, Who Dies, Who Tells the Stories” — I took with Dr. Gurstelle. (His) on-fire passion in teaching and his exquisite use of reading materials such as “Hamilton” (the play to which the class title refers) deliberately challenged my worldview and intrigued me with the responsibility and complexity behind storytellers. Since then, I (have been) fascinated with the role of narrative-curator, which ultimately contributed to my thoughts and actions of being one in my senior year.

Q. What are your goals with the exhibit?

I want the school, I want the visitors to hear about what Chinese students or just Asian students in general have to encounter, but I cannot represent all of them because eventually I just interviewed 20-something people. I just want to share my voice.

(Also) I was, like, okay, let’s make this exhibit as the graduation ceremony for myself. (She didn’t attend Commencement since her parents could not attend, and she didn’t know most of the other graduates.) 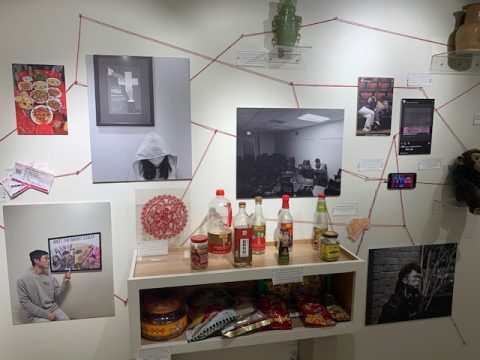 Q. What are some of the intentions behind parts of the exhibit?

The entire concept of the exhibit is not very traditional. When we go to an anthropology museum, we are expecting something very academic, very text heavy, but for me and Dr. Gurstelle, we really wanted to mix things up, bring some new ideas, include some of the artistic aspect. For example, the first thing probably you will see, the most obvious, is my title (which is spelled out with red string. She points to a red string bracelet on her wrist.) This is one of the objects that I feel the most sense of belonging to.

I have this since I was 100 days old in this world, so the red string line is very special for me. (It was a gift from her nanny, who climbed a mountain to have it blessed in a temple with wishes of love.) And red is definitely a color in China that represents home and this kind of warm feeling, sense of belonging. 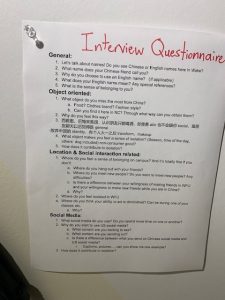 The entire exhibit is very object heavy instead of text heavy because I want everybody to have their own interpretation of the objects. There is an entire wall of objects or photos that the students have been giving me ideas of.

(She notes a phone in the exhibit with video she took of a student she interviewed, depicting her looking around a class during a group work session.) We are more perceived as introverted and probably not fluent in English. This kind of sense of loneliness is what is depicted in the video, but it’s more of the awkwardness, looking around, finding nobody to talk to. I don’t want to say helplessness, not to that extent, but the uncomfortableness is definitely there. It’s a sense of otherness. I personally didn’t experience that much because I’m very talkative.

(The interviewed students) have great friends in Wake Forest, but that does not mean Wake Forest as an educational institution has been providing them enough sense of belongingness. 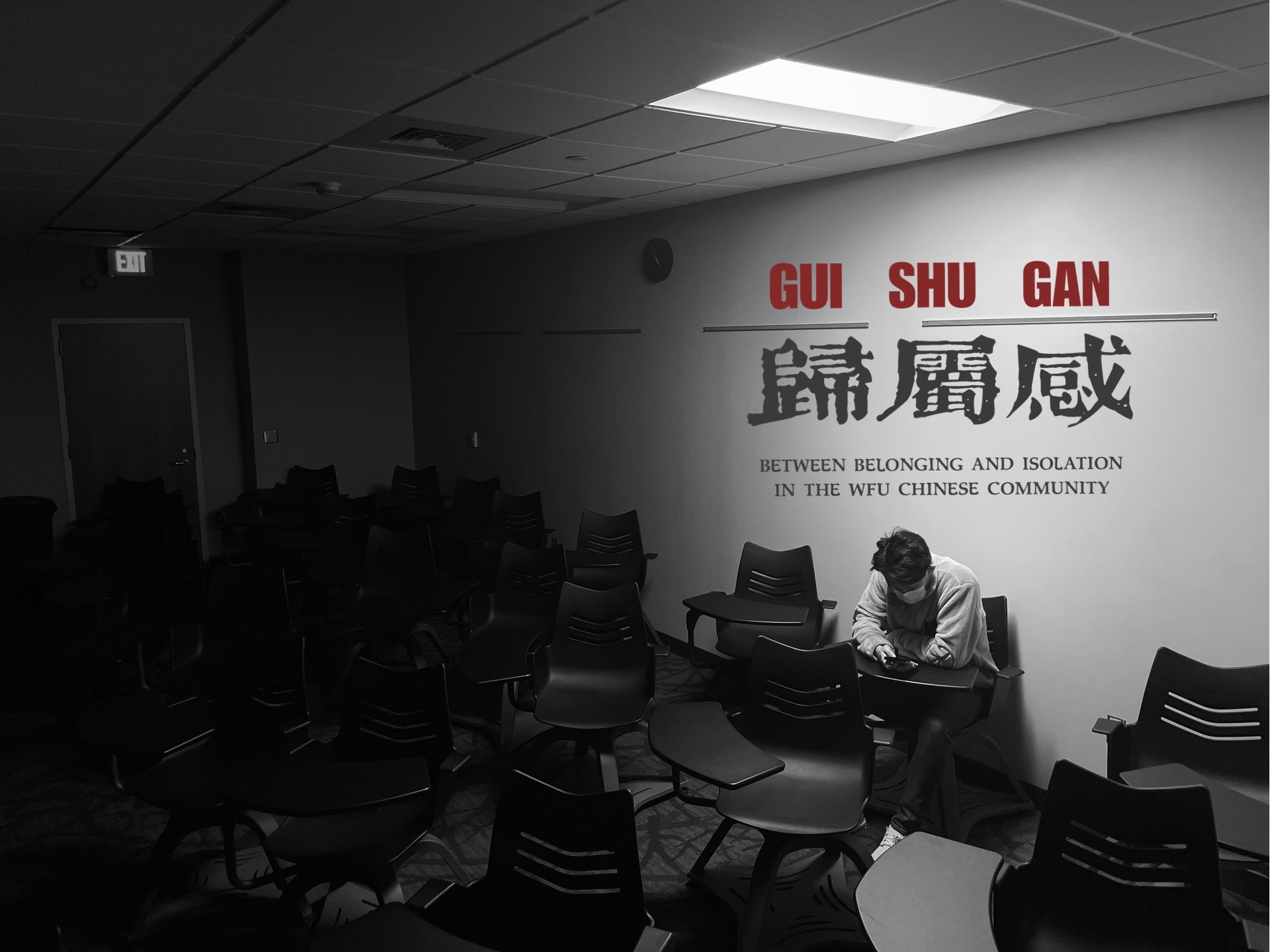 A student photographed in the dark surrounded by empty desks was meant to portray the sense of isolation the students interviewed by Li say they often feel in classrooms.

Q. Tell us about other aspects of the exhibit.

There is a dark room (a black-curtained booth) with a few lights on. You just go in there, enjoy a time by yourself, look at all the darkness or the sense of silence around you, which maybe from a more physical sense will give you an idea of what is “sense of loneliness.” One side of the exhibit is more of the interactional side of it. You can draw your own map (on plastic overlaying a map of her interviewees’ routine routes on campus). This is more of the fun part of it, because I think kids maybe like it, as well. (A visiting group of schoolchildren had marked up the map on a recent day.)

Q. Why did you choose to attend Wake Forest?

I was working with Cornell (University) for all four years of my high school (in a non-degree business management program). I just switched my interest — seriously, within a week, I told my mom, “I’m not going to apply to Cornell, and I’m going to apply to Wake Forest.” It was the essay questions. (She loved Wake Forest’s series of short questions, such as “give a list of something” or “what is something that you want to convince others of?”)

The other thing that really attracted me is the website. I think it featured one of the student’s artworks, and I really was in love with that artwork. And I was like, “Should I go with my heart? Or should I go with something that I already prepared for three years?”

And I’m, like, “Nah, I’m not going to do something that I don’t want to do. I’m always trying to try new things because I’m so young. I have a lot of opportunities to make this mistake.”

Small size of classes is another reason why I decided to apply to Wake Forest, which allows a lot of dialogue to happen in class. They want to know more about you, and a 14- to 20-people-size classroom allows you to speak up for yourself.

Q. Where do you see yourself after graduate school? You won a 2018 Young Sustainable Impact China hackathon as the team lead, so that’s obviously an interest.

Sustainability for me is more derived from my love towards dinosaurs when I was little. I’m a big fan of all the documentaries, especially animal documentaries. I saw so many documentaries recording how humans are destroying the planet that really rings the bell to me. When I see this hackathon competition online, I was, like, “Why don’t I give it a shot? Because I think I’m an entrepreneur by heart?”

I love to challenge myself. I want to be in competition. I want to talk to people. I just like all different kinds of adventure. And also, I like hiking. There’s so many things in the world I want to try. 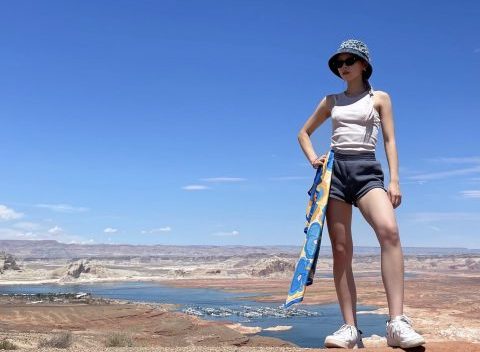 Li on a hike, one of the forms of adventure she loves.