I always knew I’d become a lawyer. From an early age, all signs pointed toward a legal career: my need for precise communication, a love of debate, and role models who succeeded in the field. My dad and grandfathers practiced law, and I was determined to walk in their footsteps.

When I arrived at Wake Forest in 1999, I had a 10-year plan rivaled only by that of my freshman roommate, Caroline Thomas Brown (’03, MD ’07). While hallmates struggled to choose classes, Caroline and I bonded over our academic and professional certitude. Mine involved studying history and attending law school at the University of Texas, after which I would join a firm and climb the partnership ladder. The path was predictable, the starting point obvious. 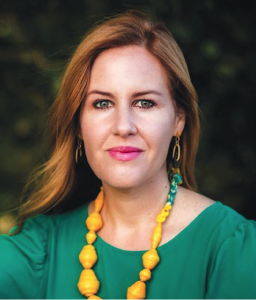 Although I stayed on track for a decade, experiences along the way hinted at an eventual deviation from my type-A, “I have it all figured out” approach to life. At Wake, my favorite classes were writing seminars, and I spent my free time organizing Student Union events. I was active all four years and served as the organization’s president my senior year. For my law school admissions essay, I penned a creative piece about finding my Wake Forest home in the Student Union. I don’t think I mentioned law — study or practice — once. It’s a wonder I got into law school. Didn’t the admissions officers see what was written between the lines? That I wasn’t interested in law, not really, not anymore.

In May 2009, I swished through the revolving doors of a sleek office building in London grinning from ear to ear. I’d just given up a coveted job at one of the world’s biggest law firms, and I couldn’t have been happier. For the first time in my life, I didn’t have a plan. Would I explore a different type of legal practice or try something new? Stay abroad or move home? What I did next was unfamiliar: I listened to my gut instead of my head.

My instincts led me to take a career break and travel to Africa, a place I’d longed to visit since childhood. I’ve always loved animals and nature, but it wasn’t until I volunteered at a Namibian wildlife sanctuary that I discovered a blazing passion for protecting wildlife. Identifying this passion was a start, but I had no idea how to deploy it.

Family and friends urged me to pursue environmental law jobs. Their pleas were reasonable but misguided. Law, I knew, would suffocate my enthusiasm, so I made a radical change, trading law for journalism and wildlife conservation. The journey that followed was incredibly challenging, but I held my passion close as I inched toward a career in “conservation storytelling.” It began crystallizing in 2015 and finally feels sturdy now that my book has been published. It describes my “personal rewilding” while spotlighting global rewilding projects such as the overhaul of an Argentinian national park.

People sometimes ask if my winding journey prompts regret. They wonder if I dream of a do-over, the chance to study biology instead of history, or journalism versus law. My answer might surprise you. I don’t regret my choices. My meanderings made me who I am, but it’s more fundamental than that. History and law degrees prepared me for what I do now — analysis, research and writing.

My history professors were unforgiving critics, and the many classes I took outside of my major, from introductory psychology to anthropology, inform how I look at the world. In law school, I learned how to analyze situations from all angles — a skill that benefits me in all that I do.

Which isn’t to say that I would recommend a circuitous career. Taking the long way has plenty of drawbacks (economic instability, for one). For some, a straight path is best, but no matter where you start, or where you stand now, know that deviations are okay — sometimes even necessary.

Millie Kerr (’03) is a London-based writer and wildlife conservationist. As a child she collected caterpillars, saved bees from drowning in the pool and dreamed of joining a lion pride. Her articles have appeared in a range of magazines and newspapers, and her new book is “Wilder: How Rewilding is Transforming Conservation and Changing the World,” published by Bloomsbury. Her website is milliekerr.com. Wake Forest Magazine published an interview with her in 2018 by Scott Thompson (’05). Read it here.