Editor’s note: Jeanne Whitman Bobbitt (’79, MBA ’87) was a student of Provost Emeritus Edwin G. Wilson (’43, P ’91, ’93) and worked as his assistant for about four years after completing her graduate studies at the University of Virginia. She made these remarks at the alumni luncheon last March for alumni delegates from every class from 1950 to 2021 as part of the inauguration events for President Susan R. Wente. Bobbitt, of Dallas, also was a member of the Wake Forest Board of Trustees.

We’ve all known Ed Wilson in many roles across the years — as Dean of the College, then as the University’s first Provost and finally as Provost Emeritus. His appointment as Provost occurred in 1967 when Wake Forest became a university. Mr. Wilson described a meeting with outgoing President Harold Tribble and incoming President James Ralph Scales, who, when queried essentially, “why me?” replied, “Because we trust you.” And trust him have we all for almost eight decades of his association with Wake Forest. 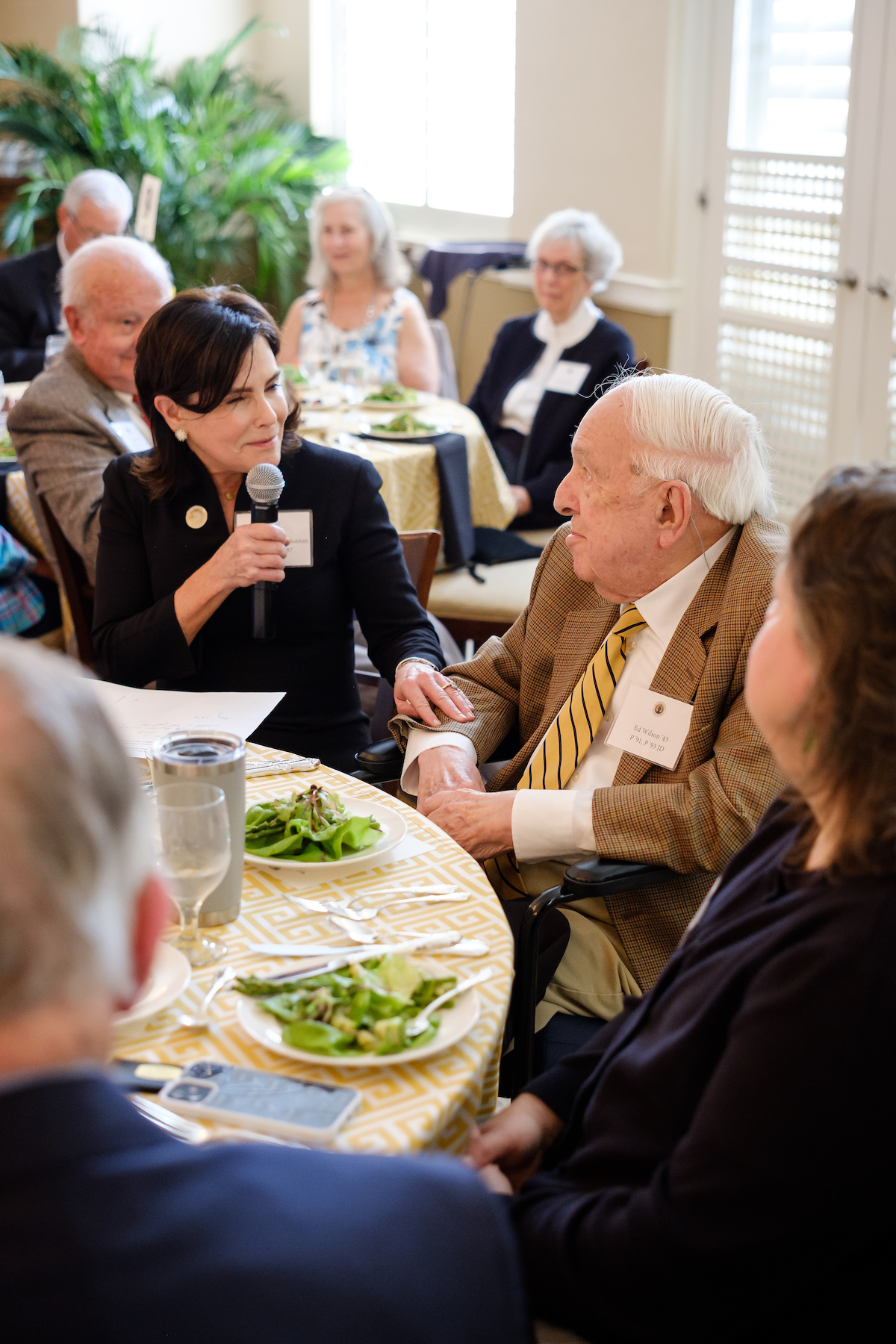 Bobbitt and Wilson at the alumni luncheon. Photo by Ken Bennett

Many of us knew him in his role as Professor on an afternoon such as this, in a classroom in Tribble Hall, mesmerized as we were by the worlds and words of the Romantic Poets or Blake, Yeats and Thomas.

Over the period of those decades, Wake Forest in her entirety has known him as leader, counselor, guide, voice and heart. For some of us, it’s impossible not to be sentimental about Ed Wilson — he evokes in us both our fondest memories of a special time in our lives and also, by virtue of his personal integrity and humanity, a call to our best selves.

His respect for others, students, faculty and staff, alike, and his genuine interest in their thinking set a high but humane bar.

But to stop there in either the sentimental or aspirational falls far short of the role Ed Wilson has played as one of the most powerful forces in shaping the Wake Forest that today ranks among the best universities in the country. Across the decades, his curiosity, intellect, acumen and discernment attracted and recruited faculty members who, in their various pursuits, were characterized first by their respect for and interest in students — the kind of close connection for which the University is renowned — and secondly, by their own lively intellectual curiosity. 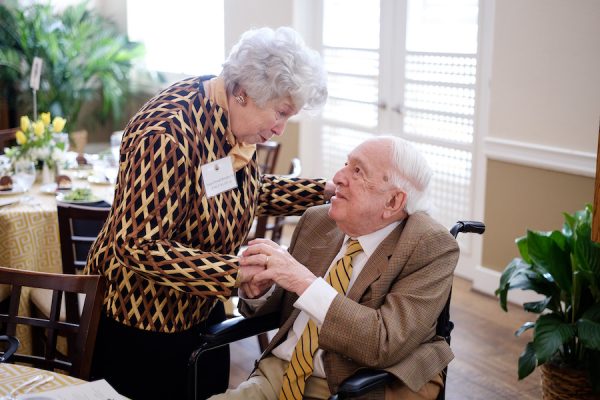 Under his leadership came the expansion, including the houses in Venice and London, of the overseas programs that are one of the University’s signatures. Under his leadership came the Wake Forest University Press and our first Reynolds Professors. His faculty appointments were often imaginatively structured to secure those most in demand — but simply being in demand for one’s scholarship was never enough to pass the Ed Wilson test. Mr. Wilson looked for scholars who were interested in the well-being of students and enjoyed teaching them. He sought people in whom he could have faith, although his was never a heavy-handed test.  Instead, it would be a conversation with a candidate for appointment; the conversation usually wandered far afield from the candidate’s scholarly discipline and was instead about the role such a person might take in shaping the thinking — and life — of an undergraduate. 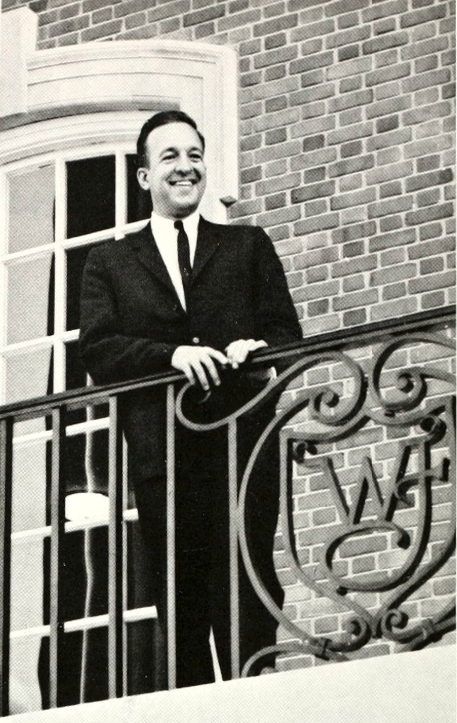 Then Dean of the College Wilson in the 1965 Howler yearbook

Always, he taught. His connection with students was constant and profound. His respect for others, students, faculty and staff, alike, and his genuine interest in their thinking set a high but humane bar. To this day, former colleagues and students return to talk books, politics, art and his great delight, poetry with him. And each visitor aspires to meet the standard of being good company.

The Wake Forest we know, love, and celebrate — and that we present with pride and joy to President Susan Wente, owes much of who and what we are to Ed Wilson.

This University is, in no small part, the creature of Ed Wilson’s imaginative strategies to create a place where all, as he himself said, “if they knew it, would be glad to call home.” 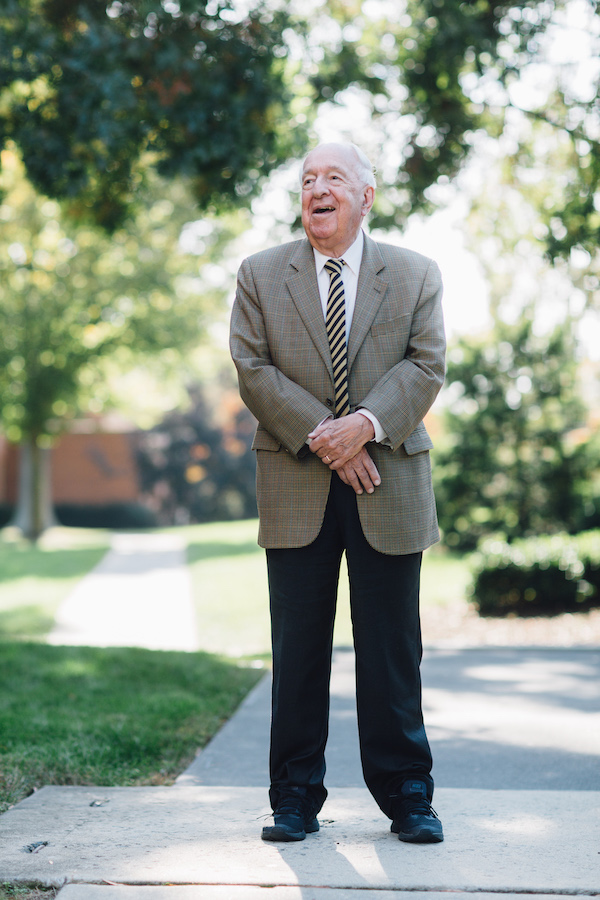 Wilson was photographed in 2015 for the spring 2016 issue of Wake Forest Magazine, "Object Curiosity." Photo by Ken Bennett.