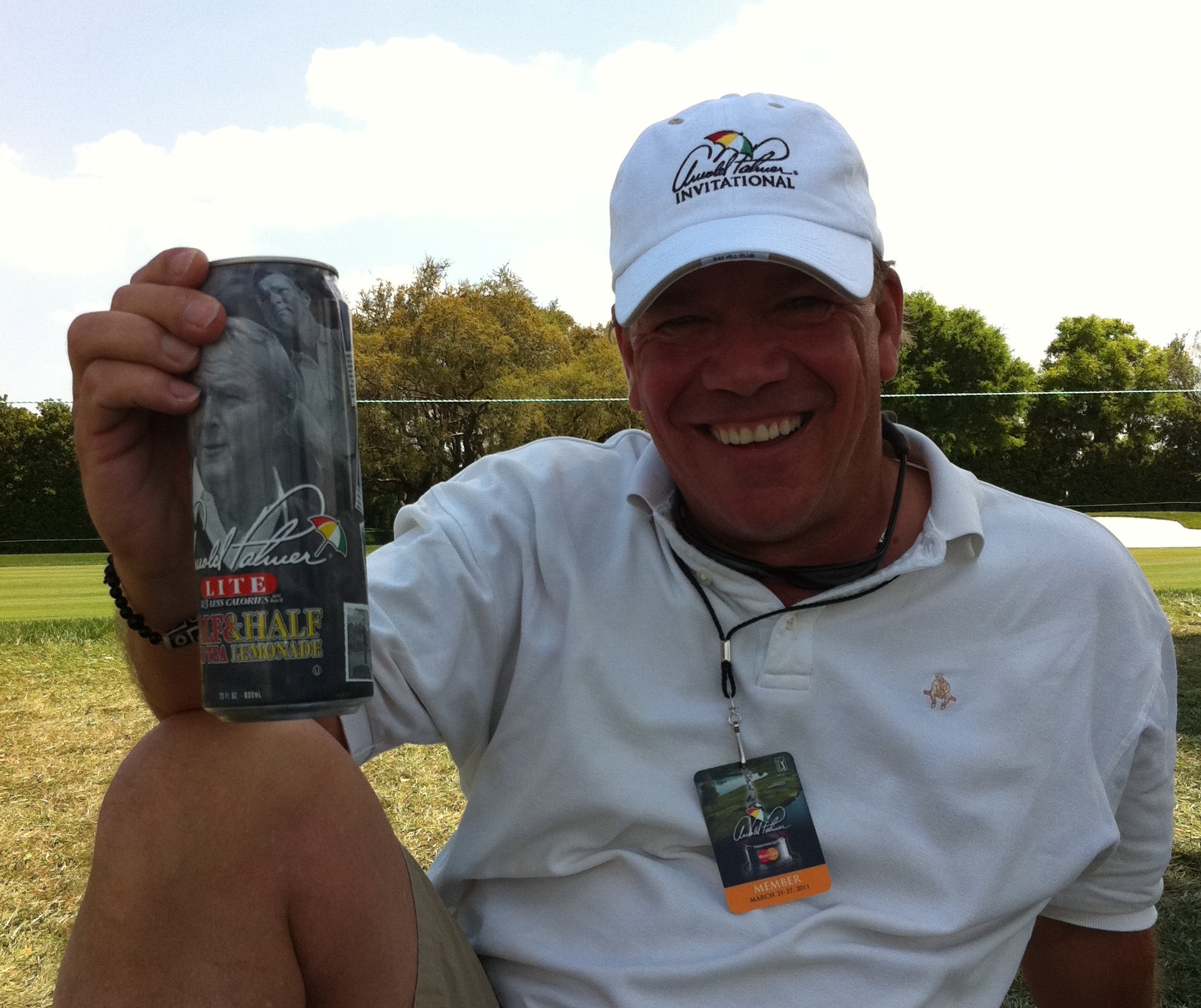 Thirty years after “graduating,” Chesster is back. The cartoon alter ego of Brad Nix (’81), Chesster has reappeared just in time for the Class of 1981’s upcoming 30th reunion (Oct. 14 and 15). Chesster was the central character of the comic strip of the same name that Nix wrote and drew every week for the Old Gold & Black from 1977 until 1981. Since Brad and Chesster graduated (Brad with a degree in psychology and honors in philosophy), Nix has gone on to a successful career building corporate and brand identity programs. Nix and his 9-year-old daughter, Lauren, live in Windemere, Fla., outside Orlando.

What was the inspiration behind Chesster?

Chesster (Chess-ter) began life when I was in high school and originally appeared in national chess magazines. (Yes, I was a chess nerd!) I saved the money I earned to help pay tuition. When I got into Wake, I morphed Chesster into a college guy and created Myron and T.C. as his friends; both are hybrids based upon friends of mine. Many have told me that Chesster stands in as my alter ego … it’s possible? All three grew into personalities over the years at Wake. Other characters came and went but these three became the most popular and hung in the entire time.

Describe Chesster for those not familiar with him.

Chesster is a hapless, fairly easygoing kind of guy. But, like many Wake Forest students, he had very clear ideas and opinions of how things work and how things are: In Chesster’s case, his outlooks were most invariably wrong and situations and circumstances would prove this out.

What kind of subjects did you tackle in the strip?

Chesster is also a catalyst – things tend to ‘happen’ to him! All designed to make a larger point about life on our lovely campus! It’s situation comedy 101. Back then, I always tried to make Chesster, the cartoon, topical to events that were happening in and around Wake Forest life. 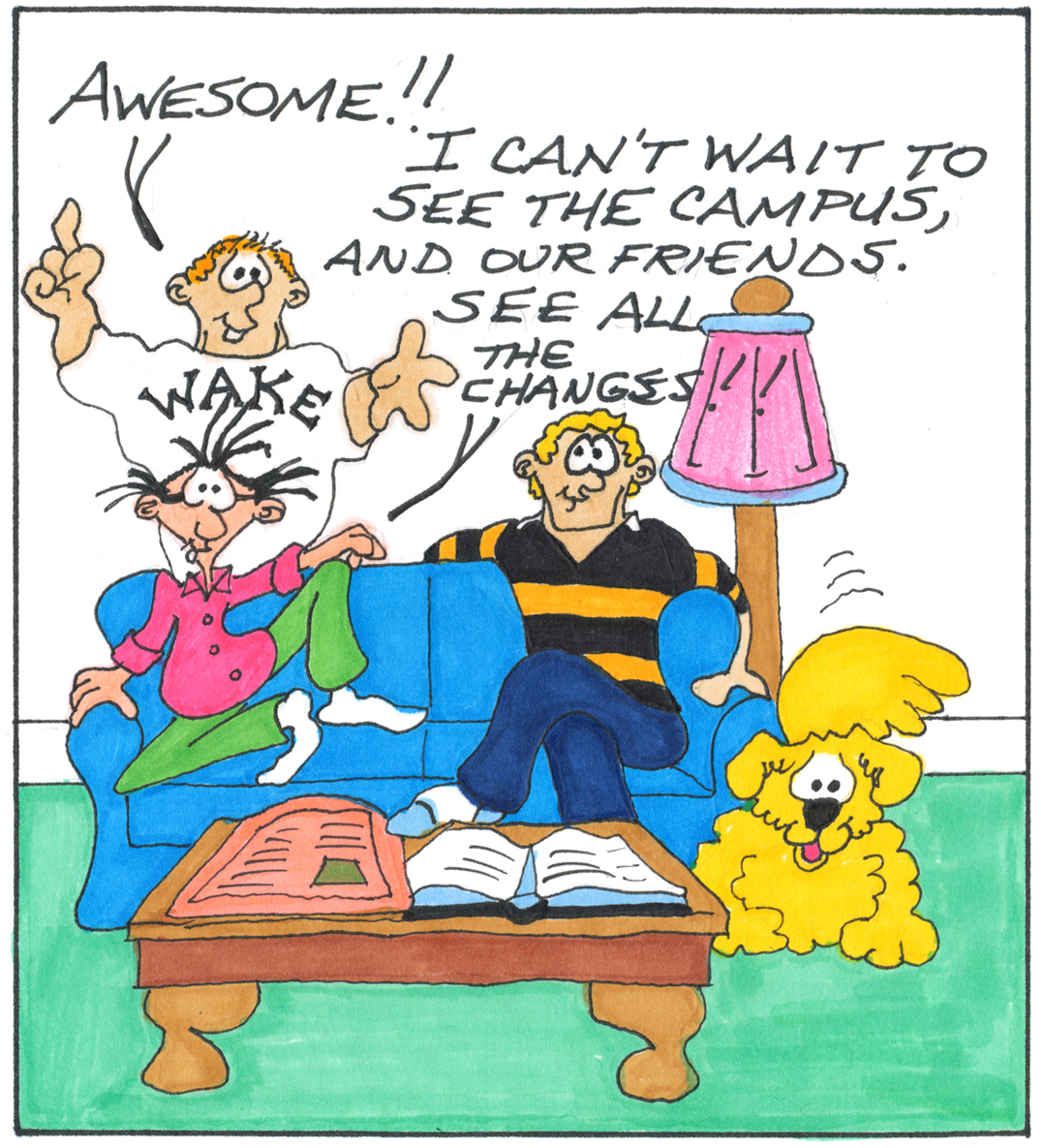 This was often in the form of social commentary as there were seismic changes occurring: We broke from the Baptist Convention (this was huge and led to many controversial cartoons); the University was transforming from an elite Southern college to a major national university which evoked a host of growing pains. There was still dynamic tension on campus: Racial, cultural and sexual (inner-visitation rules, societies, 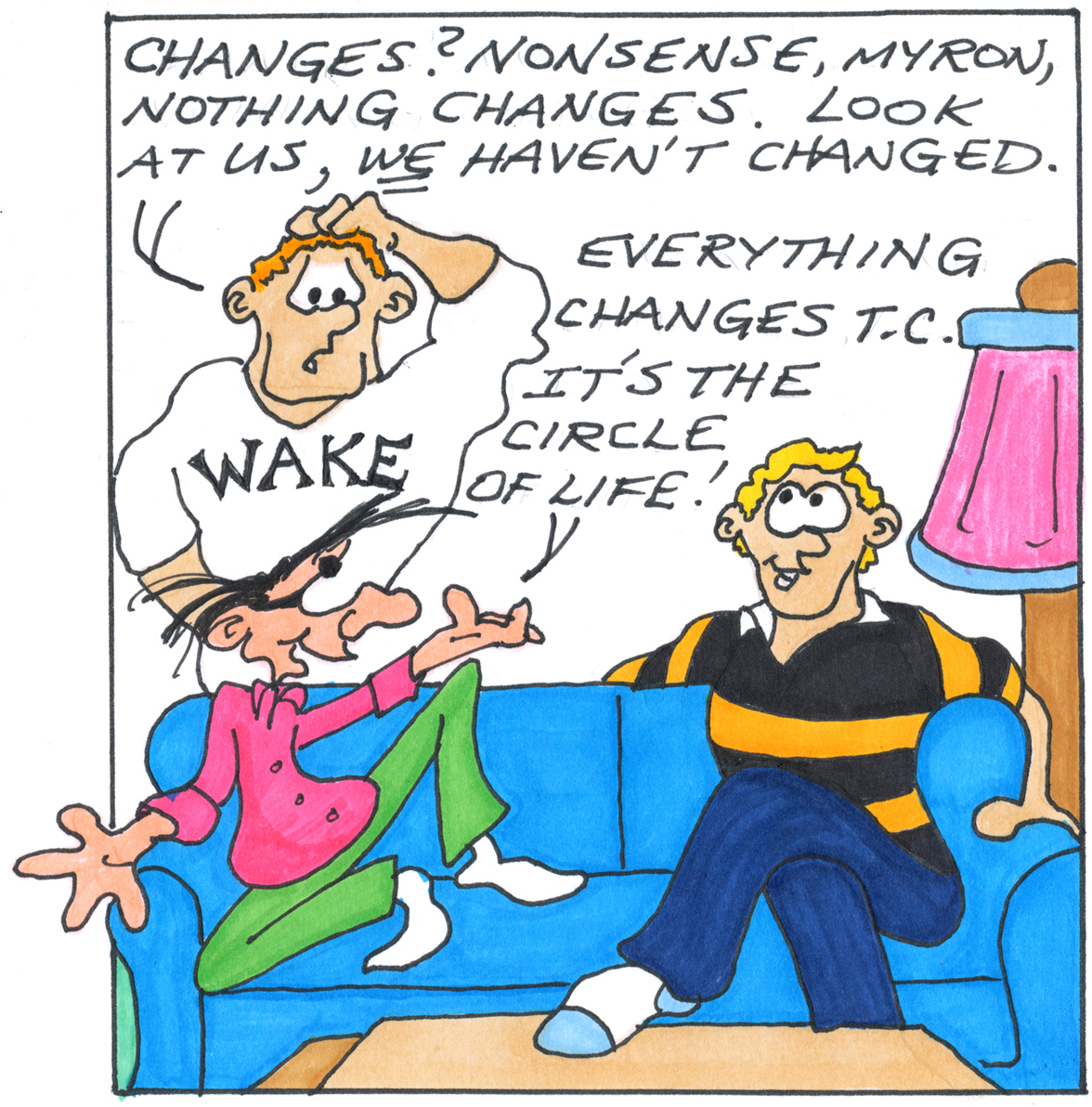 All of this dynamic tension became my source material. I never ran out of funny, ludicrous and memorable situations to draw from. Wake Forest has always been an excellent Petri dish of social irony.

Did you ever get in trouble for anything you drew?

Yep, more than once. I drew heavy fire – 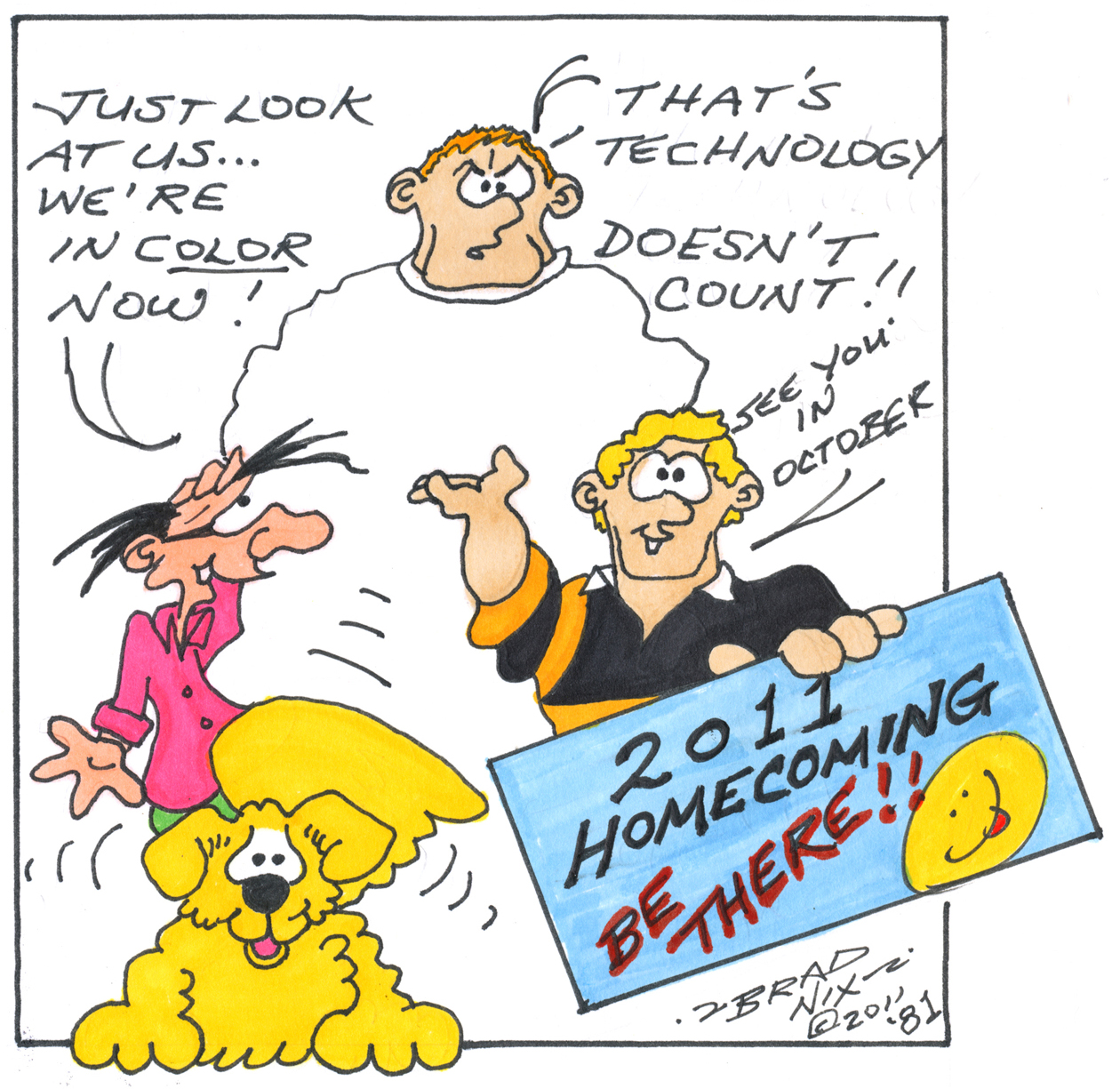 editorials, hate mail, NOT nice telephone calls! – when I published a cartoon making fun of the Baptist State Convention in the middle of the controversy surrounding Wake Forest’s desire to move in a more non-sectarian direction and making a bold decision not to be held hostage to the convention who was withholding $1 million in escrow. That cartoon ran when I was only a freshman and it frankly unnerved me considerably at the time! But by and large I think people will tell you that the cartoon was much more about being clever and funny than incendiary. I was certainly no Doonesbury, even though Gary Trudeau was my role model at the time.

Did Chesster graduate when you did?

He not only graduated when I did, but T.C., Myron and Chesster all received diplomas! I gave them to them in my goodbye cartoon in the ’81 Howler. I retired Chesster and his buddies after I graduated as by then they had become so much a part of Wake Forest life it just seemed that they belonged there into perpetuity.

I did go on to draw McGruff, The Crime Dog, and co-create his nephew Scruff and a litany of characters I developed for the Department of Justice and the National Crime Prevention Council. I had great fun teaching people, and especially children, about crime prevention, neighborhood watch, etc.

What’s Brad Nix been up to since graduating?

I went into advertising in New York City for an agency, Young & Rubicam. It turned out to be a great choice for me as my work combined my creative side with my business side. And I learned how to create brands. I became very skilled at strategic communications planning. And I literally got to travel the world on behalf of my clients. I had a beautiful career in the Big Apple and thoroughly enjoyed my work. In 1998, it was time to set out on my own. That is when I pulled up roots and relocated to Central Florida. I founded Black Pearl Intelligence and in combination with other work, have been building this business since.

Do you look at ‘The Simpsons’ and think ‘I could have done that’?

I could never have created “The Simpsons”. For one thing Matt Groening is a genius: I am decidedly not! Moreover, “The Simpsons” is not successful because it is a cartoon. “The Simpsons” is successful because it is brilliantly written. It is a writer’s medium, less so a cartoonist’s. I would not have succeeded as a professional cartoonist. From my experience, most cartoonists tend to be loners, even misanthropic. And the profession of cartooning is a very lonely one; you spend tremendous amounts of time alone at a drawing board. I am far too social. And I could never sit still long enough to make a living cartooning.

Who are some of the professors who have influenced you?

I had so many role models at Wake Forest. I was ‘star-struck’ the entire four years! That was one of the truly splendid aspects of the place. We had such unbelievable access to some of the finest individuals and minds on the planet! Looking back, it still amazes me; we could walk in and have a chat with President Scales: the president of Wake Forest University! I was in never-ending amazement taking classes with professor Best in psychology; Dr. Lewis and Dr. Helms in philosophy; chatting on the Quad with Dean Mullen; the list is endless!

What do you miss most about Wake Forest?

I miss the beauty of the campus. The smell of the place when the Magnolias bloomed. Falling in love for the first time. Playing soccer for the school. Tailgating, usually more fun than the actual games! Feeling that we were truly on top of the world.

Can you believe it’s been 30 years since you graduated?

Most of my best friends from Wake I am still in very close touch with. We truly formed life friendships and even get together annually for a ‘Guys Weekend’! But I am looking forward to hopefully seeing old girlfriends I have lost touch with, my old soccer teammates and fraternity brothers, and hopefully making new friends and acquaintances.