In his remarks on Feb. 6, 1992, Wilson described the character of Wake Forest as a mix of “goodness and intelligence.” The Wilson Wing of the Z. Smith Reynolds Library was dedicated in his name that same day.

Thomas visited campus last week to present Wilson a special keepsake on the 20th anniversary of the speech. “I consider it the best speech I ever heard on campus and one of the best I know of, period,” Thomas said. “Provost Wilson endures, indeed flourishes and continues to connect the Wake Forest community with its core values, values challenged by the growth of the last 30 years.”

Thomas is a lawyer specializing in construction and general civil litigation in Greensboro. His brother, Mark Thomas (’75, JD ’78), and niece, Liz Thomas (’11) are also alumni. 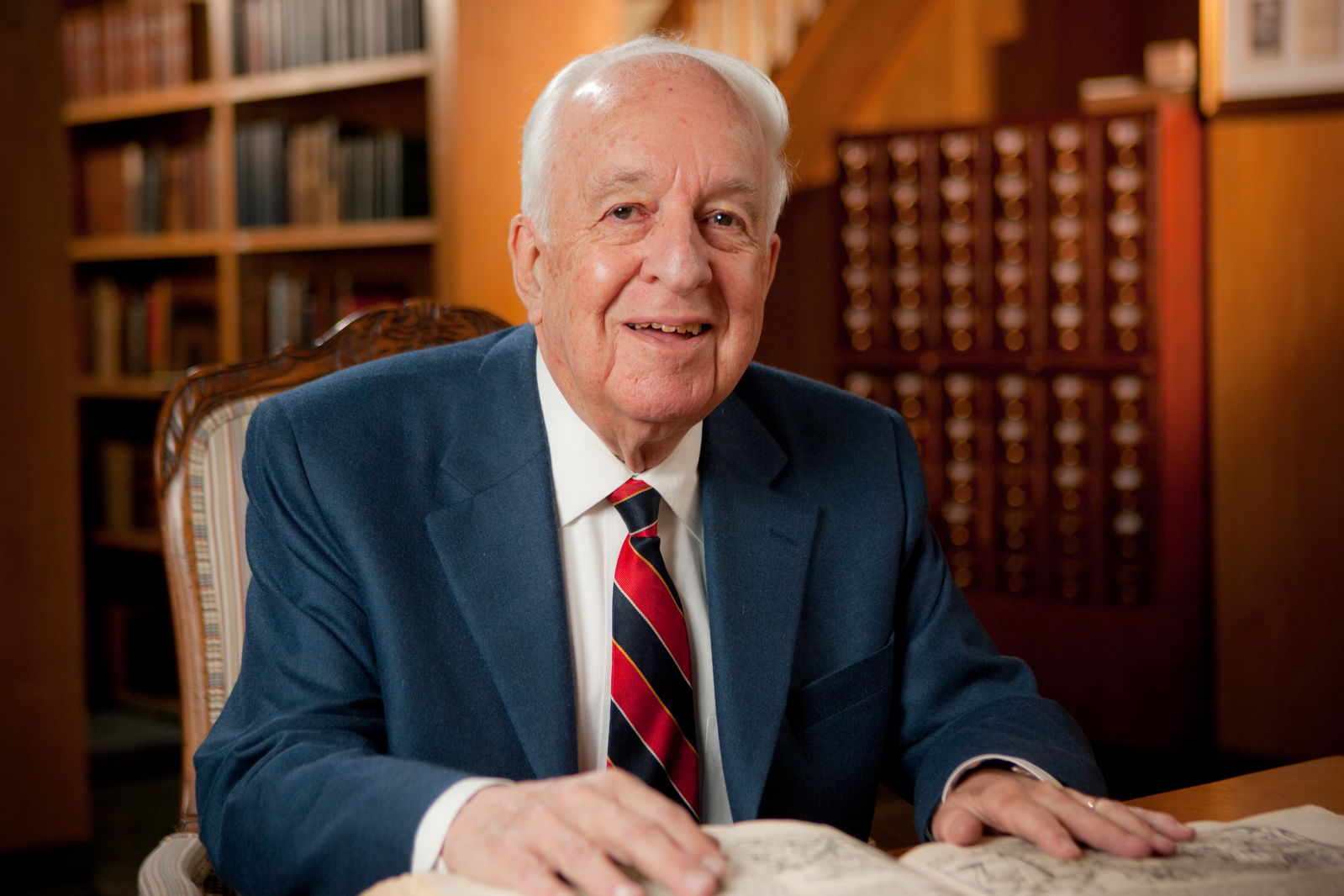 Michael Thomas first met Wilson more than 35 years ago. A political science and English double major, he took two classes taught by Wilson: “Romantic Poets” and “Visionary Poets” (Blake, Yeats and Thomas). As a student, he was also active with the Wake Forest Theatre. He appeared in the last play — “Comedy of Errors,” directed by theatre professor Harold Tedford — ever staged in the old theatre in the Z. Smith Reynolds Library. After the theatre moved to the Scales Fine Arts Center, he assisted theatre professor Don Wolfe with publicity and appeared in several small productions.

He stayed in touch over the years with Wilson, Tedford and Wolfe, and with Elizabeth Phillips in English and Don Schoonmaker, Jon Reinhardt and Jim Steintrager in political science.

He made a special trip back to campus for Founders’ Day Convocation in 1992 to hear Wilson’s speech and to see Phillips receive the University’s Medallion of Merit. He was so moved by the speech that he decided it should be printed as a broadside, like the large-sheet posters of speeches by famous people he recalled from his youth. But the idea got backed up in his “projects queue” until recently. When he realized the 20th anniversary of the speech was approaching, he decided it was finally time.

He transcribed the text from a cassette tape recording of the speech, laid out the text and a photo of Wilson, and printed it on large poster stock. “I still like the slow rush of a good printing project, as opposed to simply a drop-in-the-template graphics page,’ he explains. After framing it, he visited campus last week to present it to Wilson.

Wilson delivered the speech, “To Honor the Legacy,” in a packed Wait Chapel. He began by recalling the start of his “beautiful friendship” with Wake Forest in 1939. He invokes the words of former Wake Forest President William Louis Poteat, blended with the words of Martin Luther King Jr. and Elie Wiesel, to describe Wake Forest’s character as a marriage of goodness and intelligence. He adds his hope that Wake Forest will remain respectful of its heritage even as it grows in wealth, prestige and success. 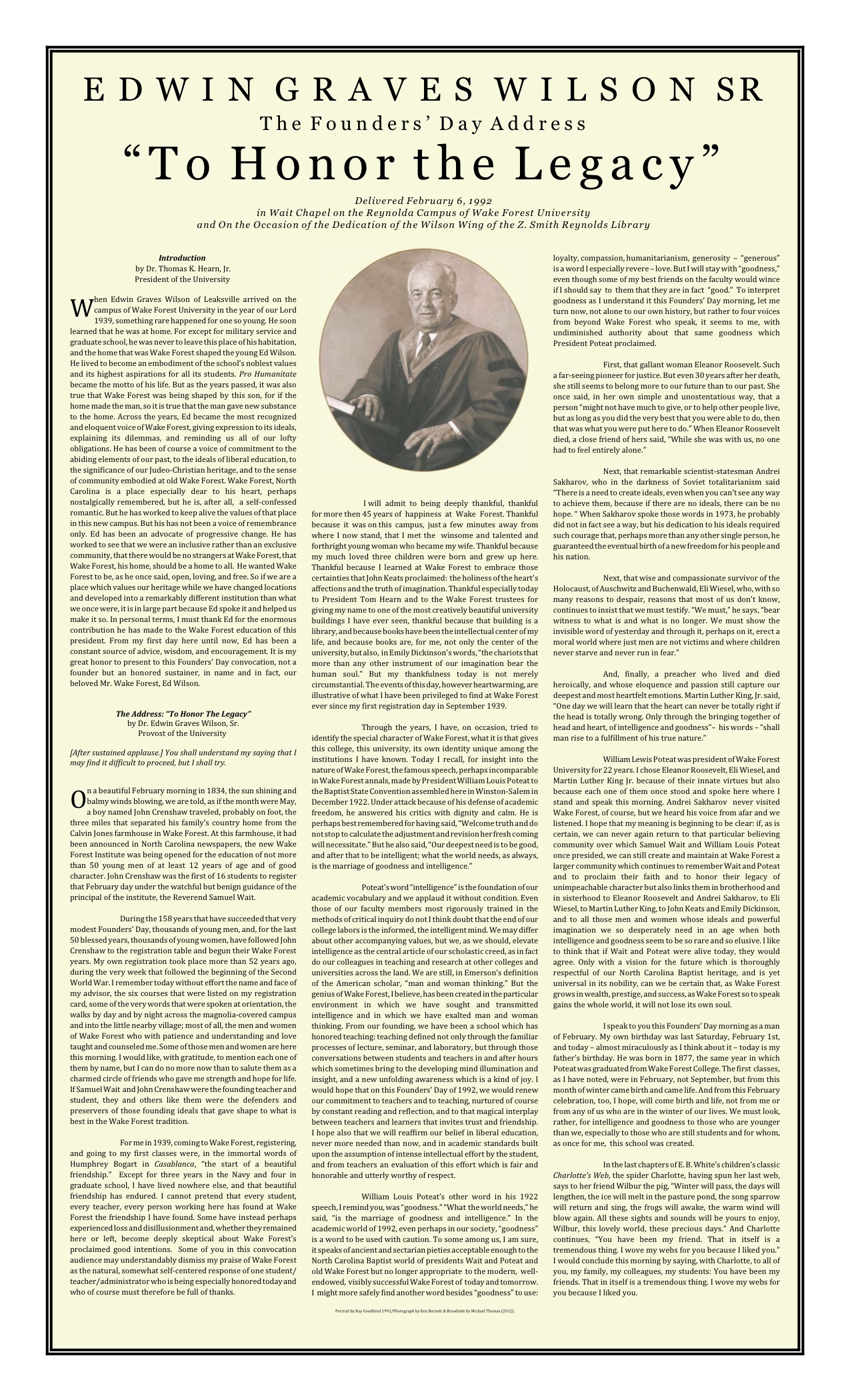 Thomas said the speech resonates with him for several reasons. “I was astonished not only by the depth of the initial theme — Provost Wilson’s deeply personal connection with Wake Forest, something perhaps that was to be expected in kind if not degree — but by the acuity of the secondary theme, Provost Wilson’s cautionary observations about the impact of change in the very institution that he loves and that was pointedly honoring him that day.

“The third and brilliantly overarching theme of the speech is the linking of President (William Louis) Poteat’s stated ideal, of a marriage of goodness and intelligence, with the lives, and in the case of Dr. (Martin Luther) King also the very words — of the iconic figures Provost Wilson wove into the speech.

“And of course the weaving of E.B. White and Charlotte’s Web into the speech as its conclusion — well, that set the address indelibly in memory.”

Read more about the 20th anniversary of the Wilson Wing. 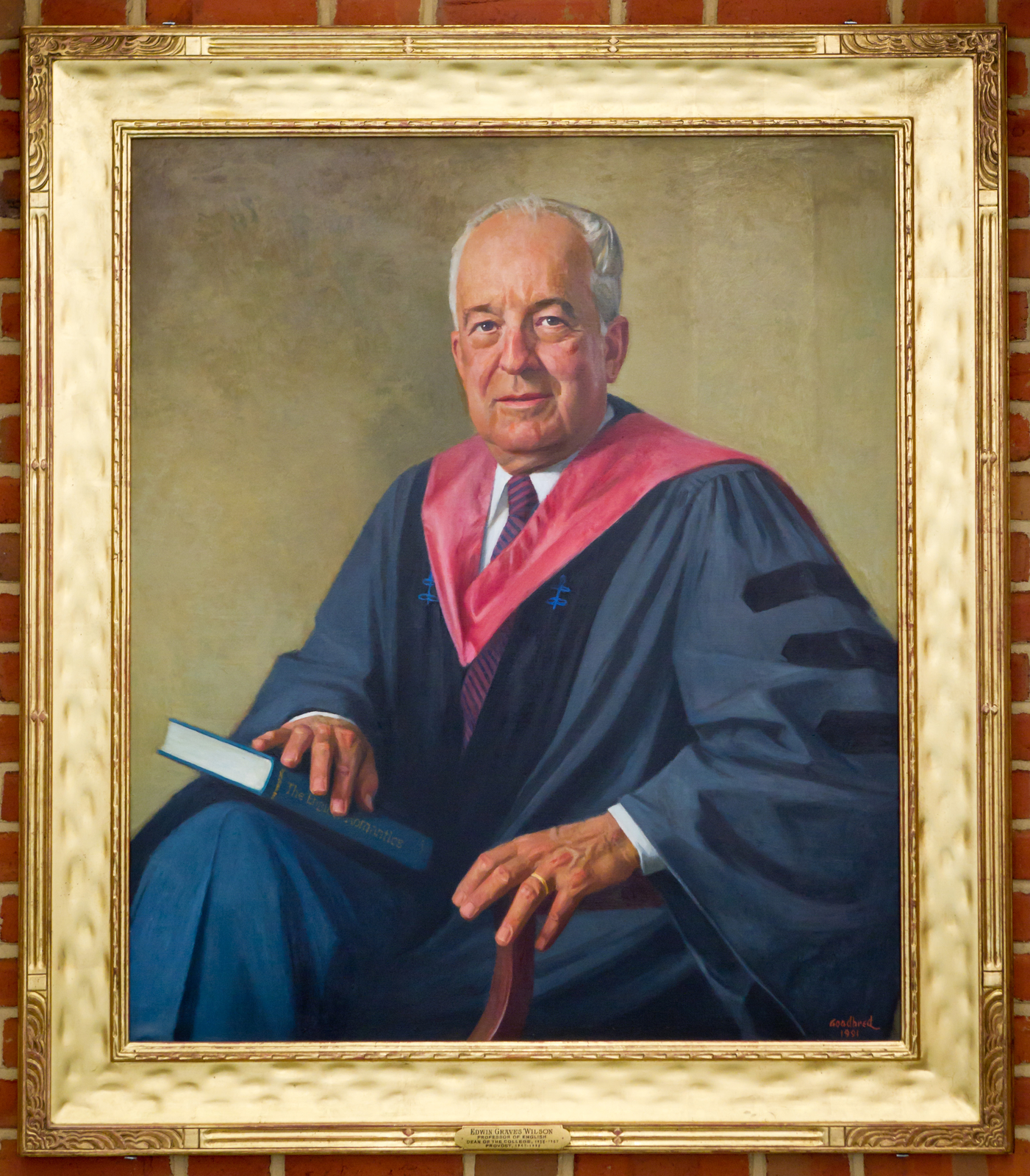 The portrait of Edwin G. Wilson in the Wilson Wing of the Z. Smith Reynolds Library.