Bill Faircloth has seen the highs of Wake Forest football — from the ’79 Tangerine Bowl to the ’07 Orange Bowl — and the lows — the heartbreaking losses and losing seasons — the last four decades.

“Coach Fair” or “Big Daddy,” as most know him, has seen it all in the 38 seasons he’s been on the Wake Forest sidelines. Since joining the football staff in 1978, he’s been to every Wake Forest football game, home and away, from Tokyo to Hawaii, from Ann Arbor, Michigan, to Stanford, California, from BB&T Field to Tallahassee, Florida, and up to Boston. That’s 452 straight games, beginning with a 14-0 win over Virginia on Sept. 9, 1978, through a 34-26 win over Temple in the Military Bowl on Dec. 27.

Faircloth (’64, P ’89, ’90, ’93) is retiring March 1 as assistant athletic director for football, ending a remarkable streak in Deacon football. He’s been on the sidelines for 42 percent of the football games Wake Forest has ever played and nine of 11 bowl games, missing only Coach Peahead Walker’s trips to the 1946 Gator Bowl and 1949 Dixie Bowl. “(He) is Wake Forest football,” former football Coach Jim Grobe once said. 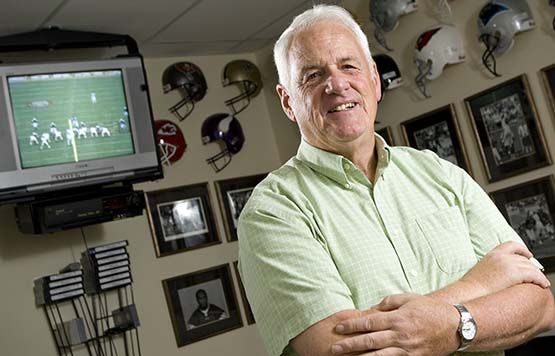 Players affectionately call him “Big Daddy,” and the affection is mutual. The players have meant “everything” to him; they’ve been a “blessing,” he said. “I’ve been fortunate to be around young people. They keep you young. I’ve always tried to help them, whether it’s giving them a pat on the back or looking at them with a twinkle in my eye or just asking ‘How are you doing?’ ”

And, occasionally, he may have to show them some tough love. When Big Daddy speaks, they listen up. “I don’t raise my voice very much, but if something hits me wrong, they’ll know that something’s wrong. They know I’m mostly an understanding person, so I don’t do that often, but when I do, they understand.”

To see the special bond between Faircloth and players, one needs only watch an athletic promotions video posted on YouTube. In the video, the grandfatherly Faircloth drives several players around campus for some carpool karaoke. Faircloth not only goes along with the stunt, he actually seems to be enjoying himself as he sings along, even throwing in some hand motions, to the hip-hop song “Can’t Feel My Face.” 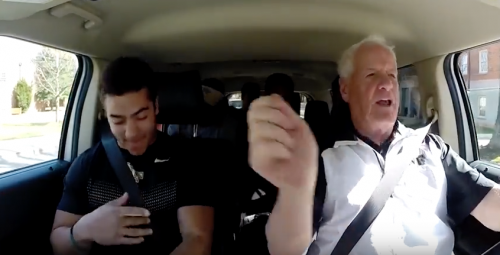 Big Daddy gets down to "Can't Feel My Face."

“We were about halfway around the Quad before I picked up what they were singing,” he admits. “I didn’t know what it was, but I joined in on the chorus. … You got to go along. They were singing something before a game one day and they got me moving around like I don’t move around much anymore. They loved that.”

An offensive lineman during his own playing days, Faircloth proved this year that he can still take a hit, even at 74 years old. During the Syracuse game at BB&T Field, a Syracuse ball carrier ran out of bounds on the Wake Forest sideline and flattened him. “I saw the guy coming but I was behind two players so I thought I was in good shape,” Faircloth laughed as he recalled the hit. “But it was a kicker and a long snapper, and they stepped out of the way. If it had been two offensive linemen they would have stopped him.”

Players rushed to help Big Daddy, but he got up on his own. “I knew if I didn’t get up quick, I wasn’t going to get up,” he said. “The next day, I felt like I had played in a football game for the first time since 1963.” 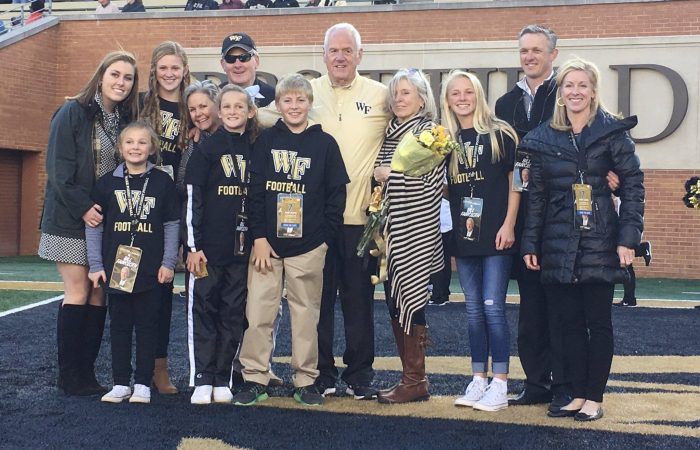 It’s been nearly 60 years since Faircloth and his twin brother, Wilbert (’64, JD ’67, P ’90, ’92, ’94), arrived on campus to play for Coach Bill Hildebrand. Given his loyalty to Wake Forest, it’s hard to imagine that Faircloth was almost a Tar Heel. Growing up in Clinton, North Carolina, he was a N.C. State fan. But when it came time for college, he decided he’d go to North Carolina and walk on to the football team.

Two alumni in his hometown — Dr. Walt Kitchin (’36, MD ’38), son of former Wake Forest President Thurman Kitchin (1905), and former basketball star Jackie Murdock (’57), Faircloth’s high school basketball coach — had other ideas. They encouraged the Wake Forest coaches to take a look at the Faircloth boys. Hildebrand liked what he saw and offered them a one-year scholarship to prove themselves. (Wilbert became “Moose 1,” Bill was “Moose 2.”)

Bill Faircloth proved to be a force on the offensive line, blocking for quarterback John Mackovic (’65, P ’97) and running back Brian Piccolo (’65, P ’87, ’89). But Wake Forest struggled mightily during his three years on the varsity team, piling up 25 losses in 30 games. Wake Forest had lost 18 straight games before facing South Carolina in Bowman Gray Stadium in Faircloth’s last home game in 1963. Earlier that week, some 1,200 students descended on the football practice field.

“It was unbelievable to see,” recalled Faircloth, who was team captain that year. “We had lost 18 in a row, and they came down to cheer us on. I told them, ‘I promise if we win the game, we’ll bring the game ball to Chapel.’ ” Wake Forest upset South Carolina, 20-19, with Piccolo kicking the winning extra point after a late touchdown. Faircloth found part of a goal post in his bathroom in Davis dorm the next morning. True to his word, he did present the game ball to students in Chapel that week. 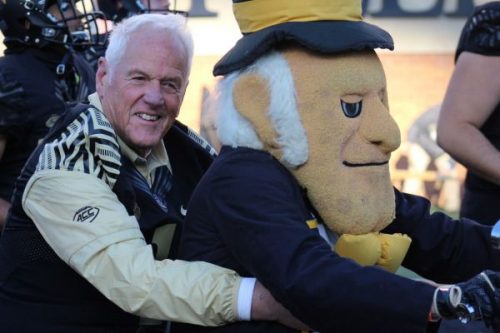 Faircloth "opens the gate" at the Wake Forest-Boston College game at BB&T Field on Nov. 26, his last regular season game. Faircloth also opened the gate at the Boston College game in 2012, his 400th straight game. He and Arnold Palmer ('51, LL.D. '70) are the only two people ever chosen twice to open the gate.

After graduating, Faircloth earned a master’s degree in education from the University of Alabama, where he had the chance to watch legendary coach Bear Bryant. He coached for a decade at Catawba College, including three years as head football coach, and for two years at Duke. After Mackovic was named head coach in 1978, he hired Faircloth as an assistant coach. (He moved into football operations in 1983.)

As football coaches have come and gone — Mackovic was followed by Al Groh, Bill Dooley, Jim Caldwell (P ’01), Jim Grobe and now Dave Clawson — Faircloth has been the one constant around the program. To understand how important Faircloth still is to the football program, consider that one enters the Pruitt Football Center through the “Bill Faircloth Foyer.”

His small office — with a “Go T-Bowling” bumper sticker and photos of other bowl teams taped to the cabinet behind his desk — is right beside Clawson’s. Even after 38 years, he’s still the guy who gets to campus before the sun comes up to make sure the players have bananas and apples for their 6 a.m. weightlifting sessions, and he’s one of the last to leave.

"When I think about Wake Forest football, I think of Big Daddy. I learned a lot from him during my career at Wake Forest, but very little of it was about football. It was not by his words, but by his actions that Coach Fair showed me what it looked like to serve and to put others before yourself. Big Daddy has a commitment to and a love for Wake Forest that in my opinion is unrivaled. I am honored to call him a friend and will always remember the joy of walking into the football office and hearing his voice around the corner saying 'Hey there big boy, come on in and sit down.' That's the kind of guy he was and will always be, loving."

He’s grateful for what Wake Forest has meant to him and his family. “I had always wanted to be a coach and I had always wanted to come back here because I just wanted to see us have a good football team,” he said. “Wake Forest always meant a lot to me because it was the place that gave me a chance to get an education. It’s been a great place to be. I’ve been fortunate to be around a lot of young people and coaches and athletic staff and professors.”

With Wake Forest heading to a bowl game, he thought the time was right to retire. But don’t look for the streak to end. He’ll still be around, he promises, either on the field or in the stands or perhaps in the parking lot at BB&T Field. “I saw the (Carolina) Panthers play last year, and that was the first tailgate I had ever been to. I thought, ‘I might like this. This is a pretty good deal.’ ” 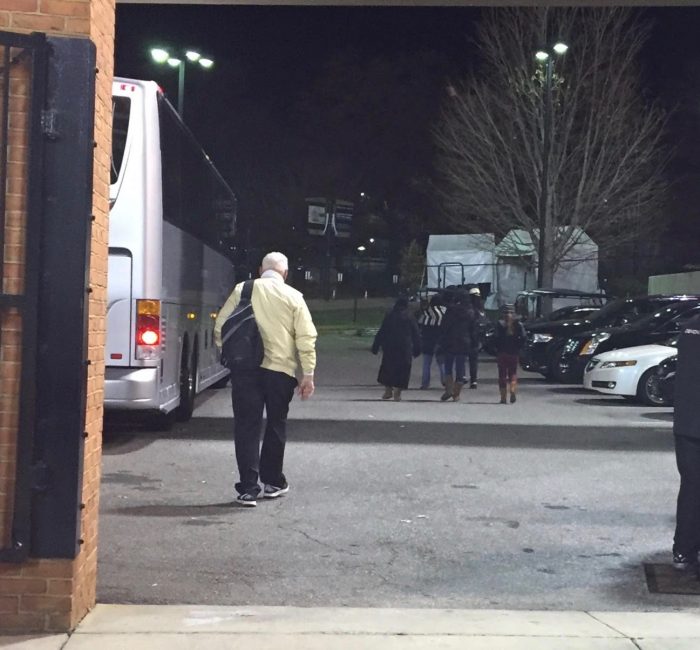 Bill Faircloth walks to the team bus after leaving his last regular season game as assistant athletic director for football on Nov. 26. Photo by his son Barry Faircloth.