Studies show we’re more likely to help a stranger in a mall after smelling cinnamon buns — but we’re less likely to respond to screams in an office if a fellow bystander ignores them. Philosophy Professor Christian Miller helps explain why. 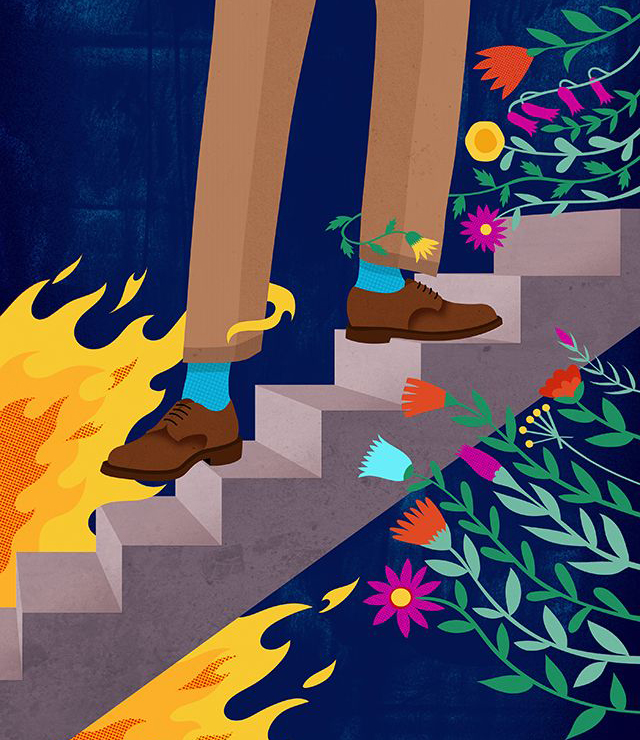 Christian Miller , the A.C. Reid Professor of Philosophy, led a team of colleagues at Wake Forest and elsewhere on the Character Project, the first out of nearly $12 million in grants from the Templeton Foundation beginning in 2010 to support research on character. Miller published two academic books on character, followed by “The Character Gap: How Good Are We?” (Oxford University Press, 2017) to share this work with a broader audience. His conversation with Wake Forest Magazine has been edited and condensed for clarity. 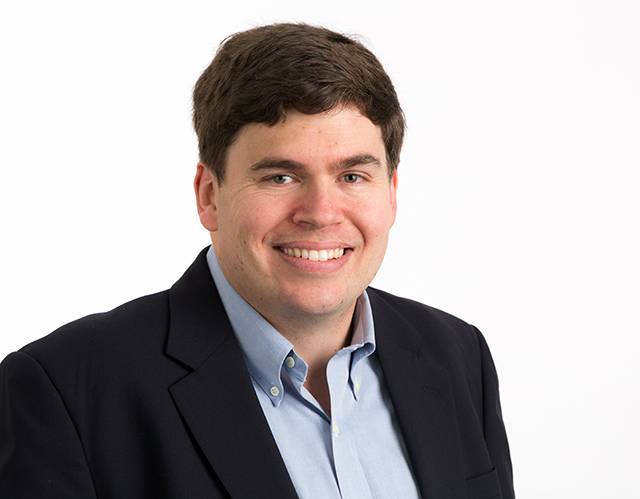 Philosophy Professor Christian Miller, author of “The Character Gap: How Good Are We?”

What drew you to studying character and writing this book?

For my dissertation (at Notre Dame) I worked on whether morality is objective or it’s culturally relative. I was thinking about where does morality come from, the foundations of morality, the source of morality? That occupied me for graduate school and then for about five years after I came to Wake Forest.

Eventually I wanted to do something else, and there were some philosophers who were reading a lot of research in psychology and saying that this research has some important implications for ethics, in particular for character, whether character exists, how good is our character, how bad is our character? I kind of just got hooked. We could run experiments to test people’s character, and then from that we could draw implications and lessons that were practical and made a real difference.

One really important thing that came out of the Character Project was a desire to not let the research stay just at the academic level. So this became “The Character Gap.” It’s intentionally short in length, low in price and with no jargon.

Can you explain what you mean by character in the context of your book?

I’m really focused on the moral side of character, things having to do with right and wrong and being morally a good person. An honest person doesn’t just do lots of honest actions. Their behavior flows out of their underlying virtuous psychology, which really is the heart of their character.

What is the character gap?

The character gap is the gap between what our character should look like and what as a matter of fact it does look like. Most people’s character is unfortunately not virtuous, it’s not honest, it’s not compassionate, etc. Why do I say there is such a gap? Well, most religious traditions talk about there being a significant character gap. The nightly news, it’s often full of examples of character gaps of people doing things that are noteworthy precisely because they’re not very good. You could look to human history and the various wars and battles and atrocities that were committed for various reasons which were not very virtuous.

I wanted to be more systematic, to see if we could be a little bit more rigorous and careful in our assessment of people’s character. And for that I turned to research in psychology.

Why do you like examining psychology research for studying character?

Maybe it (could look at) something like whether there would be a temptation to cheat or not. What would people do in the control group? And then in another group, there is a temptation to cheat, what would that group do? If everyone’s honest, it shouldn’t matter, right? People would still do the honest thing. Lo and behold, time and time again, we see in that experimental group cheating go way up compared to what happens in the control group where there was no opportunity or temptation to cheat. There are some moral saints and heroes, and there also are some awful people whose character is morally deplorable, but I think these tend to be outliers on the bell curve, and most of us are somewhere in the middle, but that’s unfortunately not a virtuous middle. It falls short of what we should be like.

Why does character matter?

One is probably the most crude reason, which is that it’s actually in our self-interest. Studies have found when you increase things like gratitude or compassion or honesty, that tends to be correlated with greater satisfaction with one’s life, greater meaning and purpose, increased positive mood, greater achievement. Another reason is that good character is good for society. Think about how much better our society would function if there’s more justice or more honesty, more compassion.

Every major world religion thinks developing good character is important. They might unpack it in different ways, but it’s front and center.

The final point is that there’s also often an emotional, inspirational aspect to good character. When we see examples of people who shine forth for their honesty or their integrity or their compassion, we’re often emotionally grabbed by them. We often admire them first, and then inside we feel inspiration, feeling what psychologists call elevation to want to become more like them.

What surprised you in looking at character and the psychological study cases? 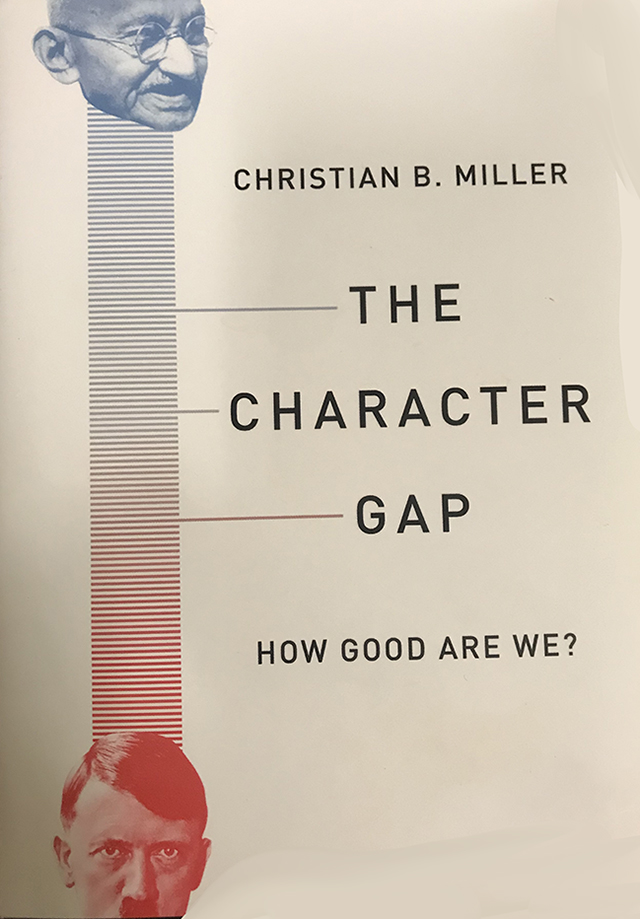 One is the ways in which our own character tends to be surprising to ourselves. A number of famous studies have found that if you ask people to predict what are you (or most people) going to do in this situation, the predictions go wildly astray.

One famous study from the 1960s had to do with helping in an emergency context. You come in; you’re taking a survey. A stranger comes in and sits at the same table and is given the same survey. The person in charge leaves the room and goes to the next room. A few minutes later there’s a big crash, then the person is screaming in pain, “Ouch, ouch, ouch. My leg! My leg! I can’t get this off of me!” What would you do?

When you ask people ahead of time, they say, “Of course, everyone would help.” Well, what actually happens? It depends. If the stranger you’re with does nothing, it’s very likely you’ll do nothing. In the most famous version of this study, only 7% of participants did anything to help; 93% just sat there and continued to fill out the survey. The underlying story has to do with things like fear of embarrassment and maybe this really isn’t an emergency. Many other studies have found the same thing.

Here’s a more recent one, and in some ways even more surprising. This is from the 1990s in a shopping mall. Control participants were just people who walked past clothing stores and then were approached and asked to help (with a small task). The ones who had passed Mrs. Fields Cookies or Cinnabon (Bakery) were then approached to help. In the first case helping was about 20%, (past) the clothing stores, and in the Mrs. Fields Cookies, Cinnabon, it jumped up to about 60, 65%.

It seems like the smell from the food is getting registered by the brain, and it is having an impact, maybe subconsciously, in such a way that incentivizes future helping. Why? A leading explanation (is) it puts people in a good mood, and they want to maintain their good mood. Helping is usually a mood boost.

What findings made you optimistic?

There are (studies that) found that people are quite willing to help or do not cheat under certain circumstances. Students at the University of Kansas were told about a classmate (they didn’t know) who had been through a terrible accident and needed help. Control participants were given a more objective set of instructions. Experimental participants were given a more empathy-inducing set of instructions — try to think about what this person is going through. The upshot is that the percentage who volunteered in the empathy condition was way higher and the amount of time they volunteered was way higher. The same kind of research over the course of 30 years found that there’s good evidence that empathy increases helping behavior.

How can we make our character better?

The good news is character can change and does change. The best we can hope for is slow, gradual progress. Fortunately there are some tools and strategies that can help.

First is seeking out positive role models. These can be fictional, real people, historical people from the distant past or contemporary people.

The second idea has to do with moral reminders, things like starting your day with an intentionally chosen reading or meditation. It could be a bracelet with a message or a cross or a necklace or even tattoos. It could be having emails or text messages programmed to come in your inbox or on your phone which have uplifting, good messages.

We see experiments where, for example, participants (taking a test) were first asked to recall as many of the Ten Commandments as you can or sign your university’s honor code. (When) they had an opportunity to cheat, they didn’t. Where moral reminders were not present, cheating was widespread.

The third one has to do with education. It’s becoming more familiar with our own psychological limitations and our own moral obstacles to try to overcome them. It’s reading books or listening to podcasts so we can be more on guard, to help us rise to the challenge.

What role does religion play in developing or supporting character?

I make it really clear that I’m not saying you have to be religious in order to develop good character. Religions really emphasize the value of practices and rituals as having an impact on character. Prayer is maybe outward focused toward a higher being, but in engaging it, one can also develop humility. Same thing with volunteering for the poor. The focus is on helping others, but one can develop one’s compassion, too. Another idea is that this kind of engagement happens in a religious context in a community, where there are fellow believers who come around you and support you. There are leaders who can provide role models and instruction and wisdom. There are inspirational sources left and right.

What has been the response to the book?

(It’s) transformed my own professional life in all kinds of ways. For example, the University of Michigan (wants me to) present to their entire faculty before the beginning of the semester. I’ve done NPR, Slate, (podcasts) in philosophy, in psychology, to writing for more popular outlets like The Wall Street Journal.

What else should we know about the character gap?

One is character is being shaped every day whether we’re aware of it or not, and so what I’m recommending is trying to be more intentional in that shaping process. Is my social media use making me a better person or not? How could I develop compassion?

The second thought is whether we like it or not, we are role models to people around us. So it’s really important to consider the impact one’s character is having on other people.

SIDEBAR: Read more about The Character Project, Wake Forest’s groundbreaking research initiative that aims to answer some of mankind’s greatest questions: Who are we? What makes us tick? And why do we do the things we do?