Part 1: It’s been more than two years since Eric Bihl (’10) and Kennon Jones (’10) set sail on a three-hour cruise, erh, make that a two-and-a-half-year cruise, around the world aboard their sturdy 34-foot sailboat, the Temjuin. Wake Forest Magazine first caught up with them a few months into their journey. As they near the end of their voyage, we caught up with them again as they departed Saint Helena (a British territory in the South Atlantic Ocean), bound for the U.S. Virgin Islands. In part 1 of a two-part email exchange, they talk about their biggest surprises, missing peanut butter, meeting Wake Foresters in unexpected places and how COVID-19 stranded them in Saint Helena. In part 2, they talk about life on board the Temjuin, their best and scariest experiences, and what they plan to do next 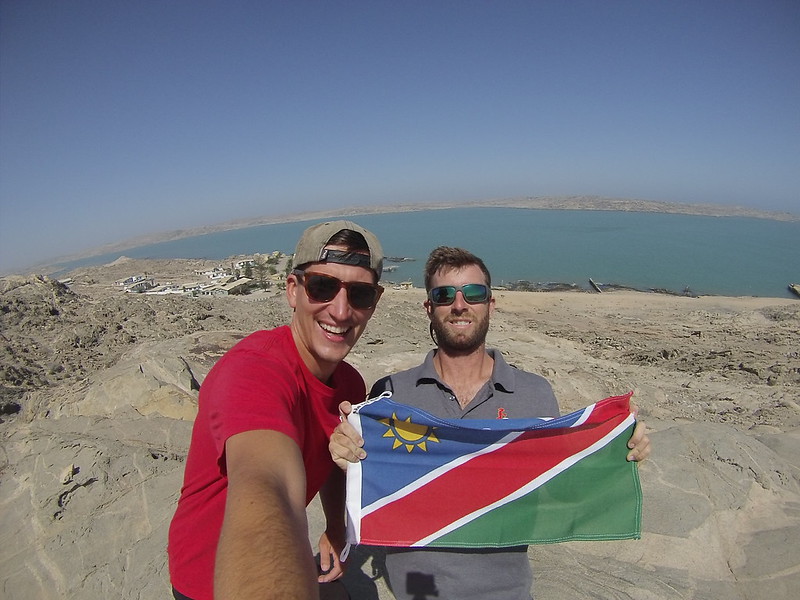 Kennon, I have to ask you first, is Eric still on board or have you thrown him overboard?

Ha! Yes, he’s still on board and has only been thrown overboard one time, in fact. It was his 31st birthday, while in transit between two islands in Tonga (in the Southern Pacific Ocean) and he was thrown onto a floating unicorn we procured in American Samoa. Come to think of it, it wasn’t as much of a throw as throwing him a line (and a beer) so he wouldn’t drift too far away. I think it still counts though.

In all seriousness though, of course there are times when we disagree on subjects ranging from “Are we living in a simulation?” to “How do we sail fastest from point A to point B.” Usually any disagreements are about the best way to accomplish the same shared goal. We discuss the options, come to an agreement and then move on — there’s not really any other option. 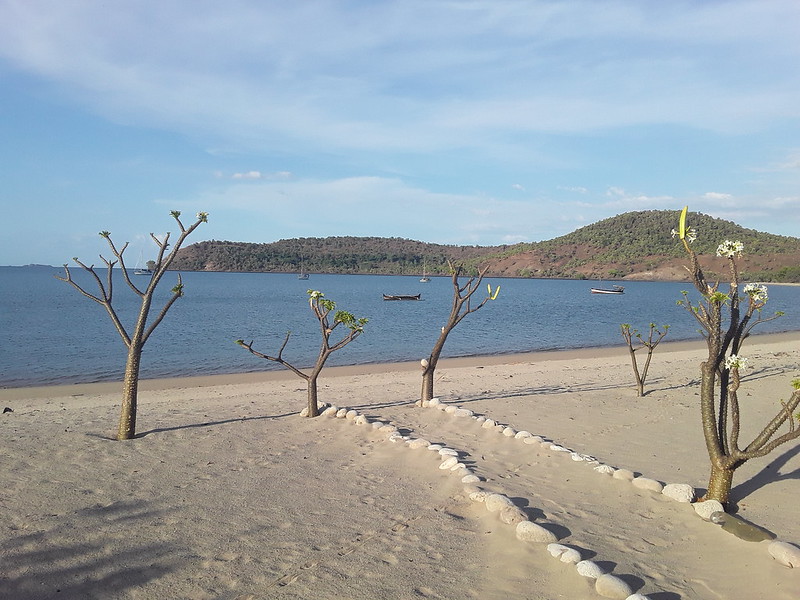 OK, Eric, your turn, how many times have you wanted to throw Kennon overboard? Two years ago, you said you would be conducting long-term social experiments on Kennon. How’s that going?

When you’ve been friends for as long as we have, and sailed as many ocean miles together, a deep respect for the other forbids wantonly throwing them overboard. You behave like a proper seaman and maroon them on an island with a bottle of rum and a brace of pistols. With regard to my sociological experiments, after some initial failures the subject is responding well. 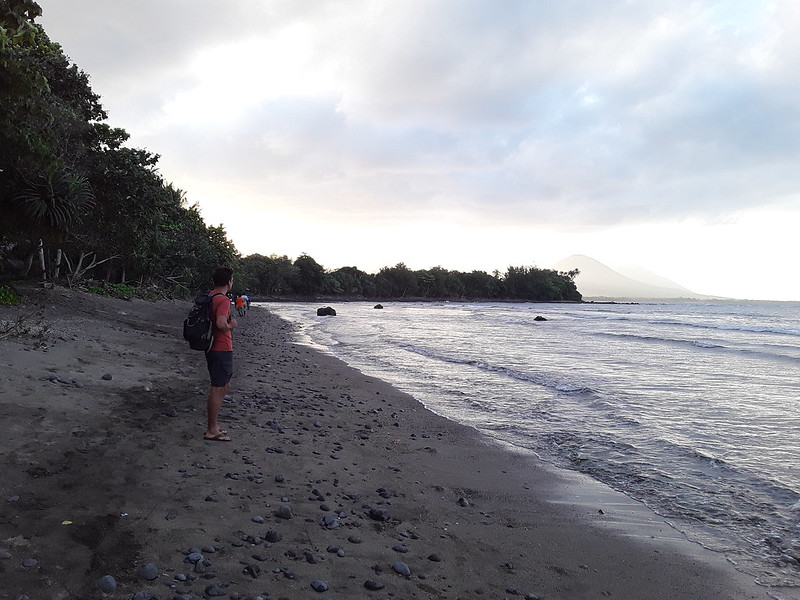 Where are you headed next?

We left Lüderitz, Namibia, Feb. 29 bound for Brazil by way of Saint Helena. When we arrived in Saint Helena two weeks later, the world was a changed place. We received drips and drabs of news during that passage but did not realize the full extent of how far and fast COVID-19 had spread until we were again able to access “normal” internet. We had originally planned to spend four or five days on Saint Helena but then the proverbial dominoes started to fall. Country after country started to close its borders or impose a 14-day quarantine on arrival, irrespective of time spent at sea. Had we left as planned we ran the risk of arriving in Brazil either to be required to stay on the boat for an additional 14 days at best or to be denied entry entirely, which is in fact what befell a few friends who did leave.

We decided to wait it out on Saint Helena as long as possible, watch the news continue to unfold, and reassess as the window continued to close where one could still sail back to the U.S. before hurricane season really starts kicking off. With news trending in a positive direction in the Caribbean and the U.S. Virgin Islands being an attainable destination (where we importantly have a right of entry as U.S. citizens on a U.S. flagged vessel), we set sail from Saint Helena on April 22 with the hope that the news would continue trending in a positive direction during the intervening month at sea. We expect to be back in the Chesapeake Bay around mid-June. 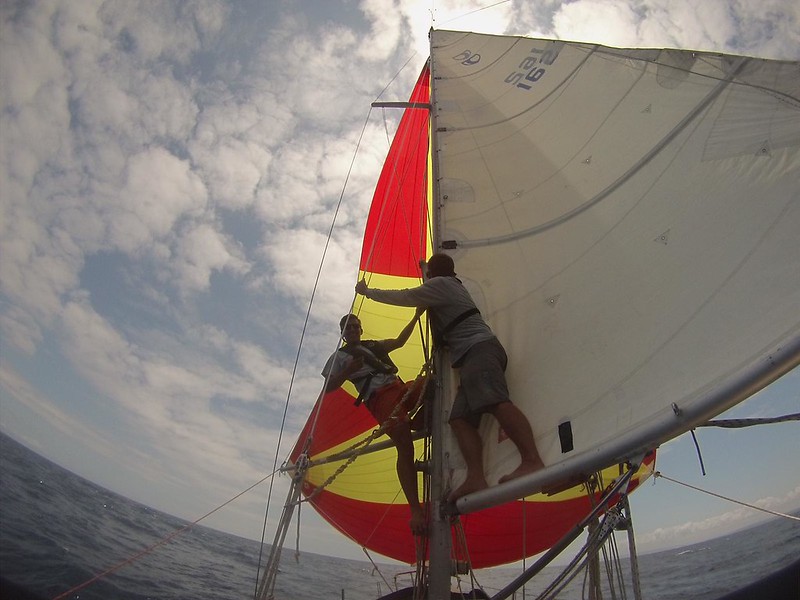 What’s been your favorite part of sailing around the world?

Kennon: Unexpected friendships, wacky situations and surprise encounters in unlikely places. For example, I tried to climb a coconut tree early on to fetch one “the old-fashioned way” to the great amusement of the islanders around. They then showed me the proper way they get them down — using a long stick. That incident turned into a tour of their farm, gifts of mounds of fresh fruit and an invitation to dinner on the beach cooked by the family. It’s little things like this that happen quite often. Other abbreviated highlights include teaching the police in Vanuatu (in the South Pacific) how to use flares, which resembled the scene in “Jurassic Park” when Dr. Grant was trying to distract the T-Rex, and surfing on Namibia’s remote desert coastline with a Peace Corps volunteer we befriended. 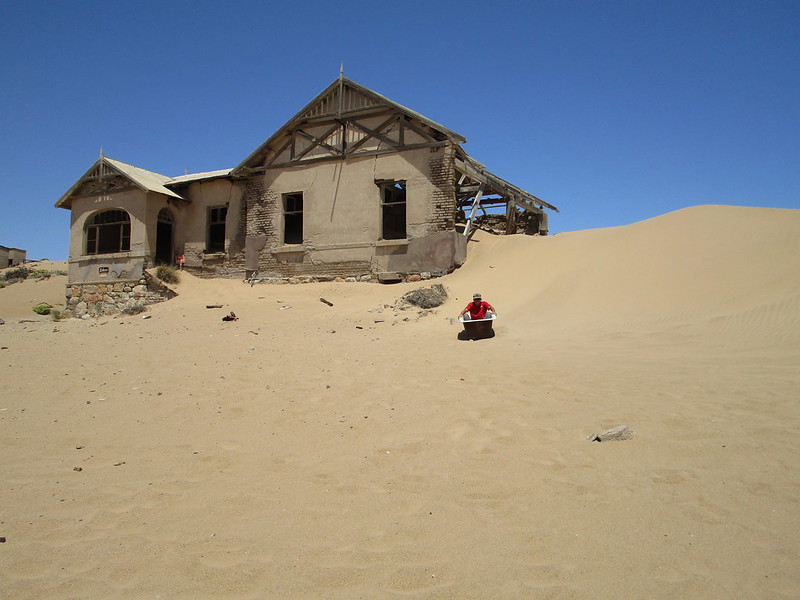 How about your favorite port-of-call?

Kennon: I’ll give a few favorites for various reasons as it really is too hard to pick one. The sailing and ranges of places to visit in New Zealand was phenomenal —and that’s just by water. Add in land travel and there really just isn’t a bad view in the whole country.

Eric mentioned Vanuatu, and I agree as well. Every village looked like a movie set — stunning palm-thatched homes, beautifully maintained gardens and some of the friendliest people in the world. There is such a palpable sense of pride in one’s community there that is hard to describe. Plus, learning a bit of the local pidgin — Bislama — was great fun.

I also have to mention Saint Helena. Perhaps it was a combination of being surrounded by an amazing group of people (both the Saints themselves as well as the cruising community temporarily stranded there) during a strange time in the world which brought everyone together so closely and quickly. The island of course is beautiful as well, but leaving such a great group of people was certainly the hardest “see you later” of the trip. 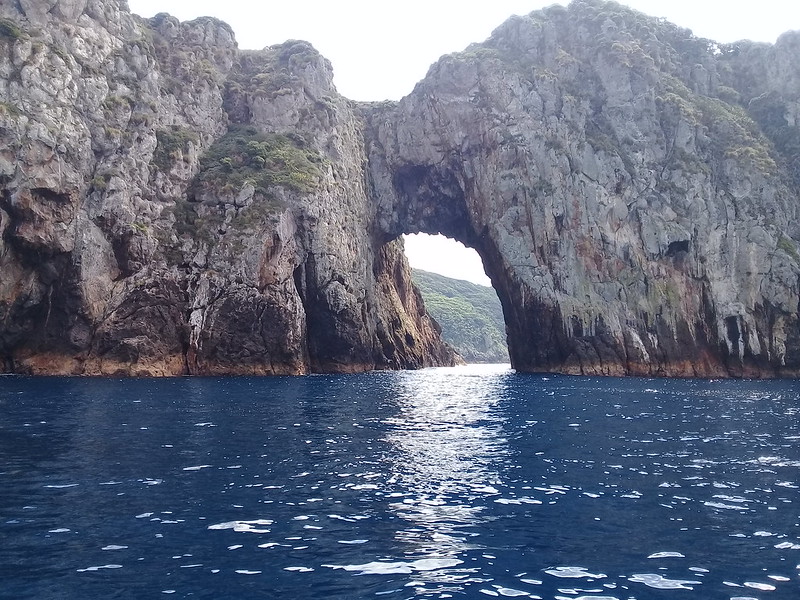 What’s been your biggest surprise or disappointment?

Eric: Disappointment — The weather in the Vava’u Island chain of Tonga. It was still an enjoyable stop, but we were rained on nearly every day there and it was perpetually gray. Whenever I see pictures, I’m blown away by what it looks like when the sun shines.

Surprise — Sailing within yelling distance of a fellow sailor we just happened to know some 500 miles offshore. The odds are impossibly low, and it has not been repeated since, even when we leave (together).

Kennon: Disappointment — Although we knew to expect it, having to deal with corruption in certain places and just grin and bear it. Unfortunately, you don’t have much recourse to fight it. Also, one particularly overzealous and power-hungry bureaucrat in American Samoa.

Surprise — Being surrounded by elephants in the Umfolozi game reserve in South Africa, while in a tiny rental car, and living to tell the tale. 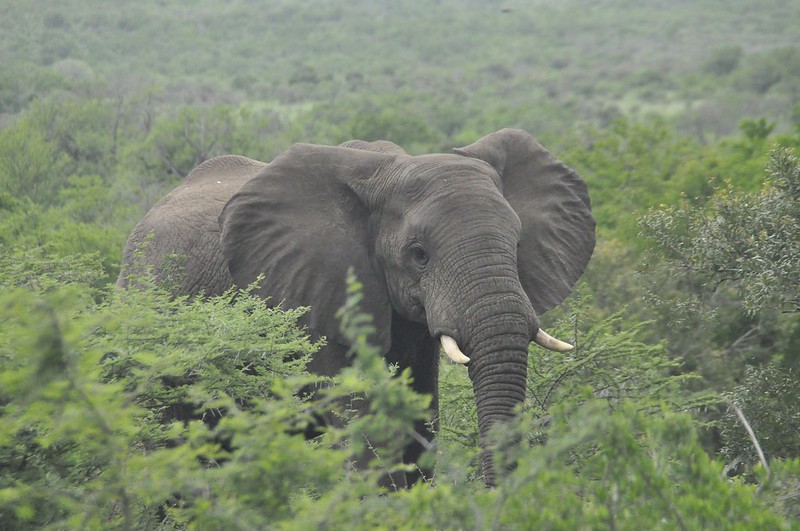 You’ve met a few Wake Foresters along the way, haven’t you? Where have you met the friendliest people?

Eric: You’ll find Wake Foresters in the most unexpected places. I spent a few weeks working as a cellar hand at the Groot Constantia Winery in South Africa and met the parents of a Wake Forest grad who noticed my Wake Forest ball cap while they were touring the winery. It’s a small world! People are generally friendly everywhere, but Vanuatu, Indonesia and Saint Helena particularly stand out.

Kennon: Indeed. In American Samoa we had a fascinating lunch with a grad, Gustin Vandiford (JD ’15), who has worked in the Attorney General’s office and in private practice there. We’ve also had friends from Wake come visit along the way.

I’d say rather than where I’ve met the friendliest people is that I’ve reinforced my belief that the default nature of people is to be friendly and welcoming. I’ve never been regularly greeted by more strangers in my life than on Saint Helena. If you don’t say “Good Morning” or “You all right?” to everyone while walking the streets, you’re the bad guy. 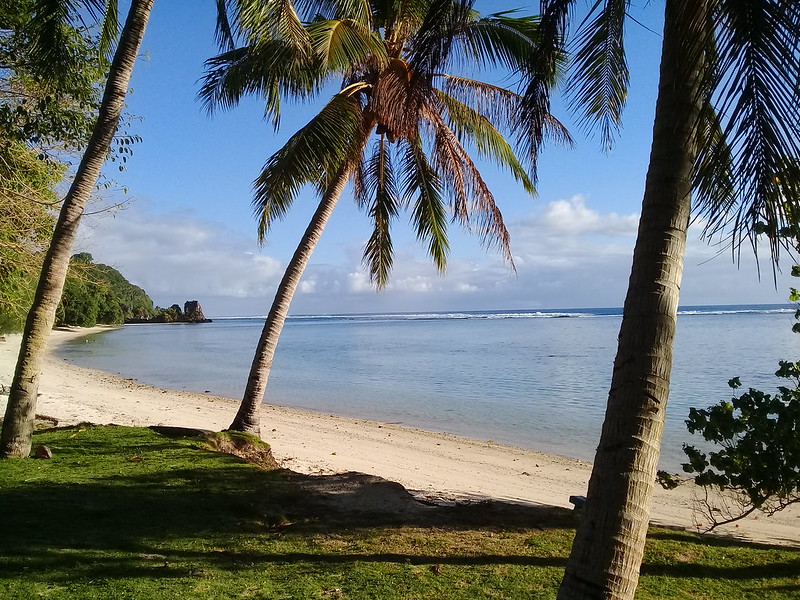 Now that you’ve been at this for two years, what’s the one thing you realize you should have packed?

Eric: I feel far less remorse over things not packed than I do frustration over things not yet invented. We have patents pending on baguette-sized dry bags, waterproof headlamps that last more than two weeks, phone cables that don’t rust after a month… etc.

Kennon: Prior to South Africa I would have said more peanut butter, but Eric’s family provided a critical boost to supplies that should last for the duration of the trip. 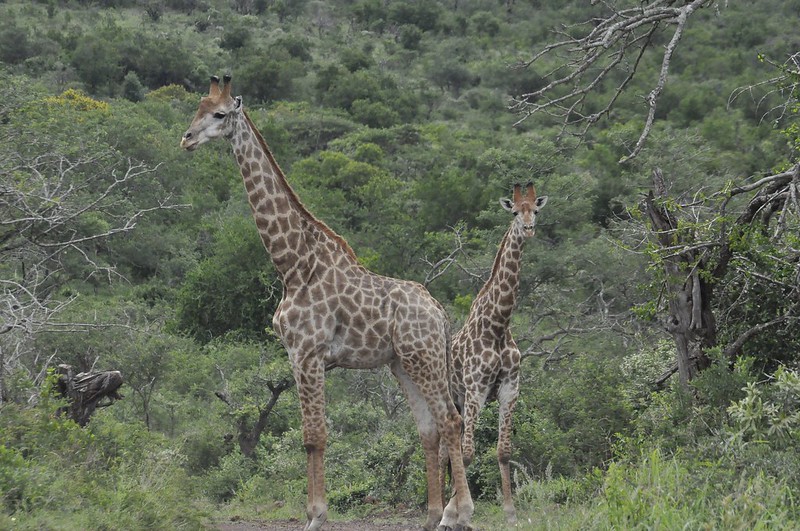