What better way to do that than honor the memory of Wake Forest’s most famous football player, Brian Piccolo (’65, P ’87, ’89), who had died a decade earlier, and raise awareness and money for cancer research? With Dawkins leading the way, the Interfraternity Council launched the Brian Piccolo Fund Drive in November 1980.

For one week, students sold Piccolo T-shirts and tickets to the Old Milwaukee Band and Dance Party, featuring fraternity bands from Alpha Sigma Phi, Sigma Pi and Theta Chi, at a community center off Reynolda Road. The 1971 TV movie “Brian’s Song” was shown several times in DeTamble Auditorium in Tribble Hall. The first drive raised $3,600, exceeding the goal by $600. 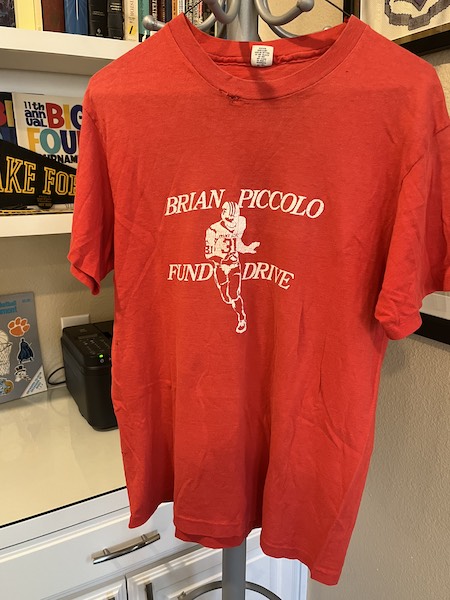 That was the beginning of what’s become the oldest and largest student-run philanthropic drive on campus. Forty-two years later, the Brian Piccolo Cancer Research Fund Drive is still going strong.

The two major fundraisers today, Hit the Bricks and Wake ’N Shake involve thousands of students, plus alumni, faculty and staff. In four decades, students have raised more than $5.2 million, including $584,000 last year, for the Comprehensive Cancer Center at Atrium Health Wake Forest Baptist. This year’s drive kicks off Oct. 6 with Hit the Bricks on Hearn Plaza.

Dawkins, who lives in Fayetteville, North Carolina, recently recalled the beginning of the Piccolo drive. “All the elements of a successful fundraiser were present: an outstanding leader with all the great Pro Humanitate qualities in Brian Piccolo, then tragically struck down by cancer. Plus, great Wake Forest students who live the Pro Humanitate ideals. There was just no way it was not going to be successful for many, many years.”

Dawkins was honored for his role in starting the Piccolo drive by then-president Nathan O. Hatch in 2009. “I’m very proud of Wake Forest and those that came behind us old guys and took that event way, way beyond anything that we could comprehend,” Dawkins said. 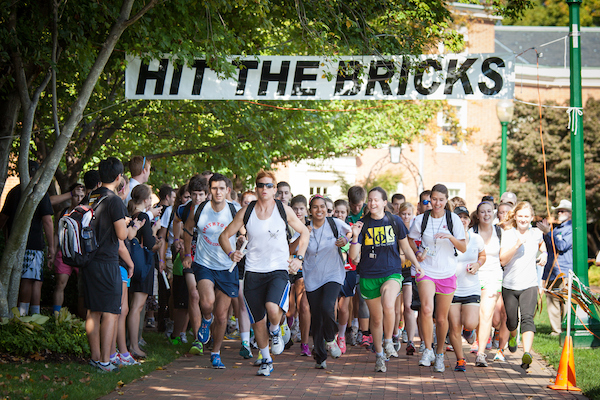 Hit the Bricks gets underway on Hearn Plaza in 2013.

Piccolo was an All-American running back for Wake Forest in 1964 when he led the nation in rushing and touchdowns. He went on to play for the Chicago Bears and became close friends with Black teammate Gale Sayers; they were the NFL’s first interracial roommates. Piccolo died of cancer in 1970 at age 26. Two of his three daughters, Lori Piccolo (’87) and Traci Piccolo Dolby (’89), graduated from Wake Forest.

John Humphrey (’81), who was president of Sigma Pi in 1980 and publicity chair for the first Piccolo drive, says Wake Foresters owe a debt of gratitude to Sayers, who died in 2020, for keeping Piccolo’s memory alive. Sayers’ autobiography, “I Am Third,” inspired the movie, “Brian’s Song,” which continues to introduce new generations of students to Piccolo.

But in 1980, there was nothing on campus that honored Piccolo. (Piccolo Hall opened two years later.) “It just seemed appropriate that there should be something on campus, particularly from students, that would honor him,” said Humphrey, who lives in Wylie, Texas.

The Piccolo drive was something the entire campus could rally around, Humphrey said. “Things change, campus changes, what’s important for people to focus on changes, but this is something that despite all those changes has lived on.” 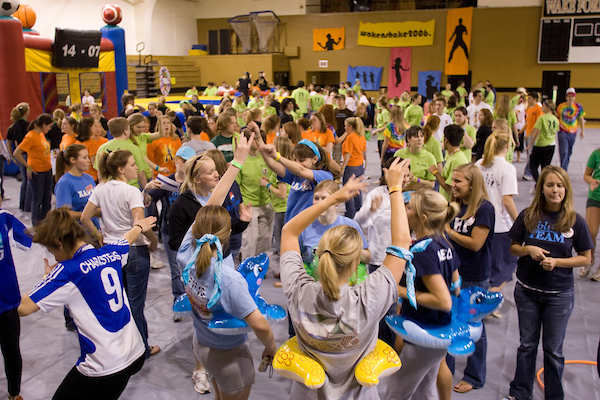 Humphrey had already seen the power of combining sports and a worthy cause. The year before, he and several fraternity brothers “kidnapped” men’s basketball Coach Carl Tacy (P ’82) — a stunt completely out of character for the stoic Tacy — and held him for “ransom” to raise money for the Muscular Dystrophy Association.

Humphrey and Dawkins were sure that a drive to raise money for cancer and honor Piccolo would be a success. Dawkins rallied support from fraternities, societies, the Interfraternity Council, Student Government and the College Union.

Bill Camp (’81) was a member of Delta Kappa Epsilon fraternity and president of IFC that year. “There was a good level of enthusiasm because there were a lot of like-minded people in the fraternities who said, ‘We should be doing something like this,’” said Camp, who lives in Tequesta, Florida.

“Think about what Brian did and how accomplished he was and how young 26 is. I love it that Wake Forest, and not just with this, honors its history. The money today is huge compared to what we raised, but you have to start somewhere.” 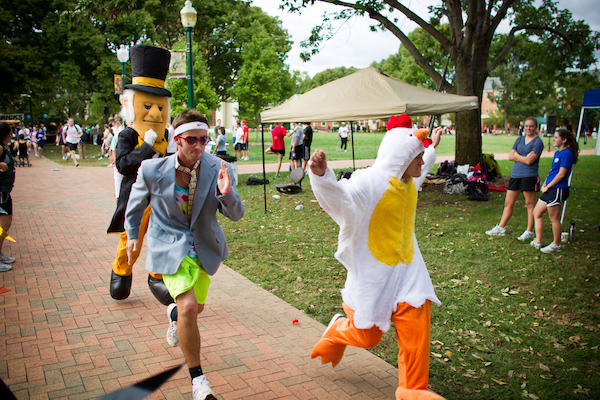 The success of the first drive was recognized at halftime of the Wake Forest-Appalachian State football game in Groves Stadium on Nov. 22, 1980. Student Government President Dave Middleton (’81) presented a check to Brian’s widow, Joy Piccolo O’Connell, for the Memorial Sloan Kettering Cancer Institute, where Piccolo had been treated. Future Wake Forest student Traci Piccolo was also present. (After the first year, all money raised has gone to the Comprehensive Cancer Center at Atrium Health Wake Forest Baptist.)

Dawkins wrote to supporters after the event: “Mrs. O’Connell asked me to thank every one of you for your support in this project. She expressed a hope that a project of this nature would continue year after year. Yet she felt we should be proud of this achievement since it is the first of its kind at Wake Forest University.”

Over the next 20 years, fraternities and societies/sororities outdid themselves with a slew of creative fundraisers. Anyone remember the Delta Kappa Epsilon/S.O.P.H. Rub-a-Dub-Thon in a hot tub in front of Reynolda Hall?

Other fundraising events included a pig pickin’, tag team twister, a pancake breakfast, a party in Reynolda Gardens, a rock concert, casino night, a dunking booth for professors, a tree-sit on the Quad, a Halloween party, a run from the original campus to the Reynolda Campus and bowling, golf, softball and volleyball tournaments. 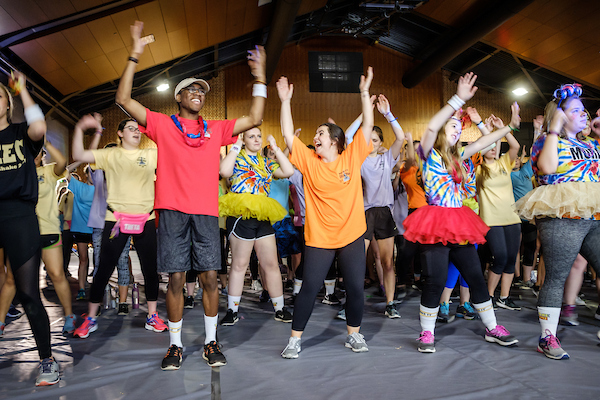 By the early 2000s, the number of events was proving too much for fraternities and sororities to organize and for the community to support. Mike Ford (’72), a student life administrator from 1981 to 2017, shepherded the Piccolo drive for 36 years. He encouraged student leaders to develop a couple of larger events to replace the multitude of smaller ones.

Students started Hit the Bricks in fall 2003 with strong support from the College Bookstore and director Donald “Buz” Moser. The concrete Quad sidewalks had just been replaced with brick, and “Hit the Bricks for Brian” (later shortened) was born. Moser’s father had just died of cancer, and he was familiar with a basketball tournament fundraiser sponsored by the Notre Dame bookstore, so he thought Wake Forest should have a similar fundraiser. Under co-chairs Richard “Trip” Chalk (’05) and Meghan Claffey Cline (’04), students raised about $4,000. Last fall, 1,693 runners and walkers raised more than $202,000. 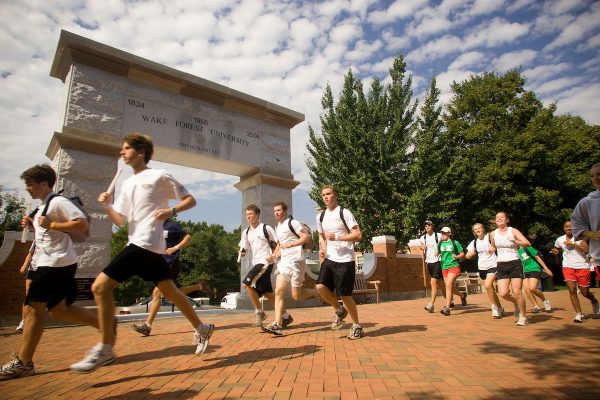 Dawkins credits Ford with keeping the Piccolo drive going as student leaders changed every year. Ford credits the vision and energy of students who pass on the tradition to successive students. Piccolo Fund student leaders tour the Wake Forest cancer center every year.

“It really taps into Pro Humanitate, a strong core value of the University and part of our shared DNA,” Ford said. “It’s been a joy seeing so many people rally around Pro Humanitate and the remarkable story of Brian Piccolo to face and fight cancer as they connect with their own family (cancer) stories.”

Dawkins, who serves on Duke University’s Brain Tumor Program Board of Advisors, has his own family cancer stories. His father died from prostate cancer, but his 32-year-old daughter survived two brain tumors as a child.

“My daughter is alive because of cancer research,” he said. “Do something for others that multiplies what you do, that’s bigger than yourself. You never know when the next cure for a particular type of cancer will come. Do something for others that’s meaningful. The Piccolo fund drive is meaningful. With the money that it’s raised for cancer research, it’s going to save somebody’s life.”

The Brian Piccolo Cancer Research Fund is an initiative of the Office of Civic and Community Engagement. 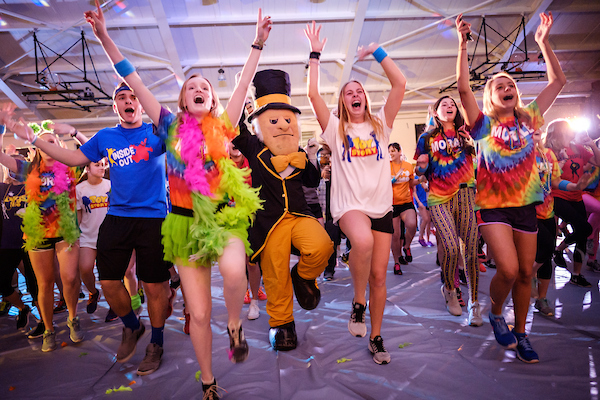