About four years ago, when I was living in my first home after completing graduate school, I began trying to emulate my grandmother. Doris Pearce Smith (’55, P ’78, ’80) passed away when I was a student at Wake Forest. At pivotal moments in life — my wedding, both graduations from Wake Forest — I long for her presence. However, the longing for her and the connection to her memory are never as strong as when I cook. At home, I began to recreate my favorites of her dishes with mild success; her Brunswick stew continued to elude me. 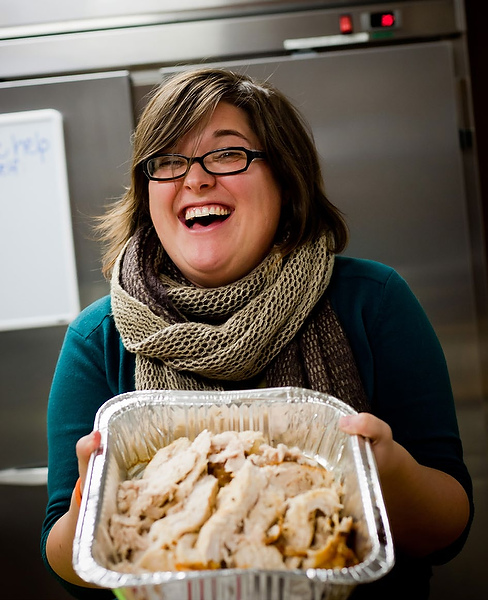 As a new professional at Wake coordinating Campus Kitchen, I felt more connected to Grandmother Smith and her Southern Depression-era inspired cooking than ever before. I prayed for her guidance and slowly found that, as my husband’s Grandmother Sizemore says, “I don’t cook fancy, but I can cook.” Through Campus Kitchen, a small group of dedicated students and I make simple meals for hundreds each week out of leftovers. When I deliver the meals to our partner agencies in the community, I experience something else familiar: an expression of comfort and a relaxation that shared food provides.

I know this comfort intimately. I felt it sitting in my grandmother’s kitchen. As a high school student, I saw it in the expressions of compassion on the faces of church members who came bearing food when my father was in the hospital. I smelled it in the butter beans and Brunswick stew cooking on the stove at my grandparents’ house, where a fire raged in the fireplace and an ACC basketball game lit up the television. This comfort was the comfort of home.

Every year, when Campus Kitchen begins to plan for Turkeypalooza, our annual effort to serve more than 400 turkey dinners to the community, I think about this comfort in food. Our clients have reflected on the ability of our food to provide a kind of normalcy to their otherwise chaotic lives. There are certain dishes that we associate with ‘comfort food,’ but it wasn’t until I began my work with Campus Kitchen that the reality of all food as nutritional comfort resonated with me. Food has the incredible capacity to stimulate our memory, grant us a nostalgic comfort and assure us of security. Each culture has its own methods, spices and mixtures that welcome outsiders and signal a sense of home. On an increasingly globalized campus, food has the capacity to offer us shared experience. Like me, many of our students associate a full belly and a warm fire with the benefits of home. They come to Campus Kitchen, Wake Saturdays or the Hunger Board because they acknowledge the comfort of food shared and occasionally the crisis of food missing. 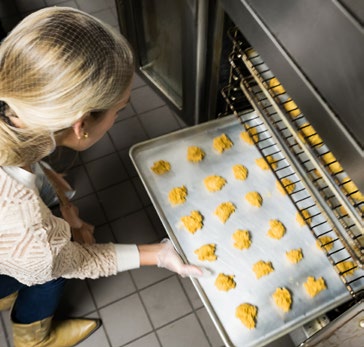 “Isn’t that what any great chef needs: a test kitchen in which to try, to fail and to succeed?”

This idea of security is central to the new terminology around hunger — food security. In 2011 Winston-Salem was named one of the most food insecure cities in the country. Many of us were stunned and devastated. Our realization that one in three families with children was unsure where the next meal was coming from led to an avalanche of despair over the far-reaching impacts such a crisis would continue to have on children, individuals and families in our community. Wake Forest students have begun to realize hunger’s impact on virtually every aspect of a person’s life and how the study of food security is important to nearly every academic discipline. What in 1999 inspired two students to cook in their residence hall kitchen has grown into a central social issue for today’s Wake Forest students. While they are still regularly serving meals, delivering produce and growing food, students are also thinking critically about the systemic problem of food insecurity and testing solutions in concert with seasoned community partners. Isn’t that what any great chef needs: a test kitchen in which to try, to fail and to succeed?

After several years of putting off attempting the Brunswick stew out of fear I could not live up to Grandmother Smith’s culinary prowess, I found myself at a crossroads. With all the ingredients I needed, I either had to try to make it or admit failure without lifting a spoon. I began the preparation, working slowly for a little over an hour, tasting and adding ingredients until finally leaving the stew on to simmer. After a few hours of patient waiting, I tasted a spoonful. It was OK. I tried to give myself a break. I realize that few things are perfect the first time. Surely my grandmother burned the bottom of a pot a few times. I know she forgot the rolls in the oven nearly every time we had dinner.

Like my heirloom recipe for stew, the solutions to our world’s social problems are rarely perfect the first time we try. Instead, they must be cultivated over time, with the contribution of a multitude of seasoned chefs, until we find a recipe or a book of recipes that can make us all healthy and secure.

Shelley Sizemore (’06, MA ’09) grew up in the town of Wake Forest and has never attended a school without Wake Forest in its name. She is assistant director of campus life and service, overseeing Campus Kitchen, Wake Alternative Spring Break, SPARC (Students Promoting Action and Responsibility in the Community) and Project Pumpkin. She is one of the University’s 2014 Martin Luther King Jr. “Building the Dream” award winners.

It began with a trip to the grocery store. The first time I volunteered on a Campus Kitchen shift, I went to The Fresh Market to pick up unpurchased produce and deliver it to a community partner for the food-recycling program. As I rode in the van down the short road back to campus — my first true experience outside of what was now more than an expression about the “bubble” that encapsulates Wake Forest — I felt a need to do more.

Because my family members had been affected by hunger for generations in both Greece and the Midwest, I knew that food insecurity existed all around us. But I was shocked at how close to home the issue was now that I was in college. 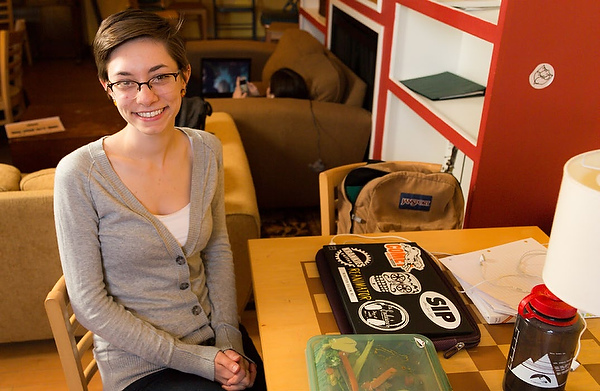 Brittany Forniotis is a double major in history and art history.

Last summer I worked with Campus Kitchen as one of the cooking and delivery interns. I remembered my family members speaking about being hungry and how they most appreciated the food tasting good, not just filling and nutritious. That guided me as an intern in cooking food for our partner agencies. Instead of looking at my internship as a job, I treated it as an opportunity to cook all the things I had dreamed of but never had tried to make.

My first day in the kitchen I attempted one of the most infamous foods — Brussels sprouts. Although it was a challenge for me to make Brussels sprouts delicious on the first try, I found that the reaction of the people we fed that day made everything worth it. The cooking I did over the summer was as much about enabling people to enjoy and look forward to their meals as it was about helping them meet their needs.

The idea that hunger is a problem not just in a far-off country but in our own neighborhood is taking hold among Wake Forest students, along with a reminder of our commitment as students who live by the Pro Humanitate motto to do what we can for our community. The attitude shift has created an atmosphere of exceptional involvement in hunger-related issues on campus, which has been absolutely fantastic because the time feels right for a change in policy, in practice and in perspective. Wake Forest students, faculty and staff in various organizations are aiming to be catalysts for change. 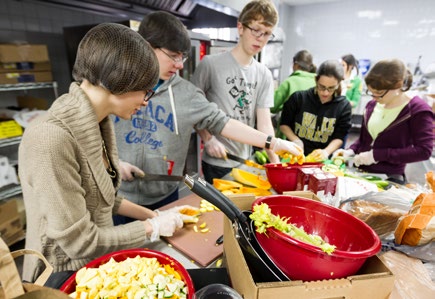 “As I rode in the van down the short road back to campus … I felt a need to do more.”

I’m most excited to be a part of our campus chapter of Universities Fighting World Hunger. It serves as a collaborative effort between the campus and the community to promote education and awareness about hunger and to inspire action, all the while acting as a communications hub for all those involved with hunger issues. Our chapter, part of a national network, seeks not to create new events or volunteering efforts but to augment and strengthen what already is underway, such as co-sponsoring a screening and panel discussion of “Foodways and Roadways,” a documentary that examines the changes in Winston-Salem’s African-American community and its access to food in response to the built environment. We are also aiding the Volunteer Service Corps in coordinating Wake Forest’s third annual Food Justice Summit, promoting student scholarship on food justice in both Winston-Salem and the wider world.

In both my volunteering and leadership roles, I try to engage food insecurity in the most meaningful ways possible, always keeping Pro Humanitate at the heart of what I do. Winston-Salem will forever be my home, and I will forever strive to promote awareness of hunger as an issue of great importance in our community.

Brittany Forniotis of Matthews, North Carolina, aspires to earn a Ph.D. in history and teach with an emphasis on service learning.