Kersh said discussion groups began looking at undergraduate possibilities in Innovation Quarter, and the idea evolved so positively that by February 2015, five forums were set up for the community, faculty, staff and students. The faculty devised the initial programs being launched, and faculty governance approvals followed. Curricula are in development, and the search is underway for a chair for engineering. 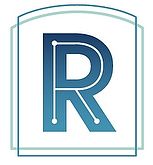 ebecca Alexander, associate chair of the chemistry department and faculty point person for the project, saw the proposals as relief for crowded science labs and classrooms, particularly in Salem Hall, which was built in 1956 and looks the part. Overall enrollment in chemistry classes has grown 70 percent in 10 years with no new space, said Alexander, who was named in April as director of academic planning for Wake Downtown. The chance to design new space was alluring. “The square footage per student that we have for our teaching labs is woefully insufficient,” she said. “There’s one classroom in this building where we cram 48 students. … It’s a lousy place to teach, students are elbow to elbow, and if they’re taking an exam, you have to climb over students’ backpacks to answer a question. There’s not enough room to move chairs around to create small groups to discuss something.”

Faculty’s first choice would have been a new building on Reynolda Campus, but their chance to work side-by-side with medical school faculty, including some who already collaborate with Reynolda Campus professors, will be a plus, Alexander said.

“We kind of can’t say no, because we’ve been saying that we need space, and here’s the opportunity,” she said. 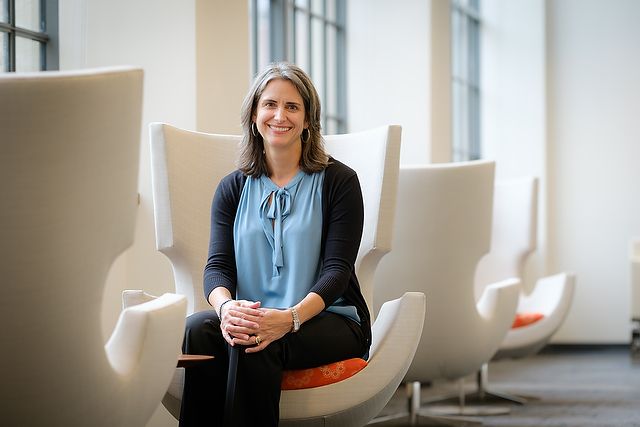 Professor Rebecca Alexander is helping with the academic transition “to more space, new space in an exciting part of town.”

Some faculty members have expressed concern that the new programs will divert focus and money from core humanities departments. Hatch said the principal funding will come from the additional 350 students’ tuition and from philanthropists who wouldn’t otherwise give to Wake Forest. “It’s all additive,” he said.

Administrators said the University remains committed to the College and noted that the current capital campaign seeks to help meet existing departments’ needs across disciplines.

Gillespie said the Wake Downtown program is designed to grow gradually, “being very thoughtful, imaginative, and using resources we already have in place.” The University will hire some new faculty but plans to draw on Reynolda and medical school faculty with engineering experience, rather than building a program from scratch, she said.

Alexander is excited about the new students who could be attracted. She knows that many students strong in science and math will consider only schools with engineering — as she did — even though they end up — as she did — choosing chemistry instead. 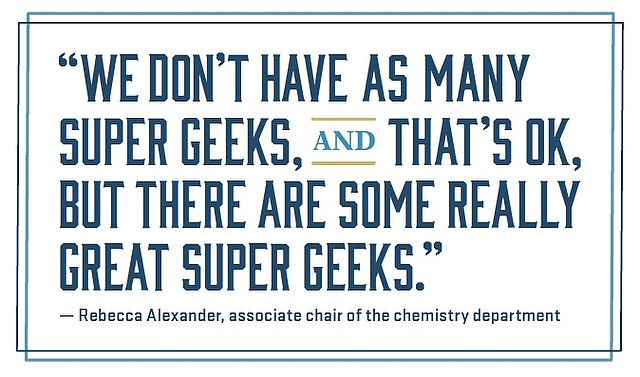 “Because Wake Forest is a liberal arts collegiate university, we certainly work hard to educate the whole person,” she said. “At the same time, though, that makes it sometimes hard for the students who are true geeks, the students who just really want to be in the lab all the time. ‘Oh, I gotta take that English class.’ They do it — are often glad they did — and our students end up both well trained and broadly educated. We don’t have as many super geeks, and that’s OK, but there are some really great super geeks.”

Martha Allman (’82, MBA ’92, P ’15), dean of undergraduate admissions, said her office prepared brochures in anticipation of the project and shared them when the spring rush of prospective students began.

“It was wildly popular and very well-received,” Allman said. “We’ve also had feedback from guidance counselors who say, ‘I hope you’re ready because your applications are going to skyrocket.’ ”

That’s not surprising as counselors view employment data. Employee demand for undergraduate biomedical science and technology graduates grew by 58 percent nationally and 43 percent in North Carolina from 2012 to 2014, according to the national Education Advisory Board. 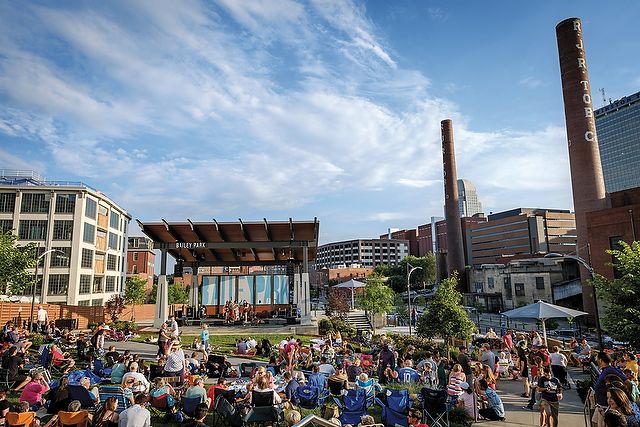 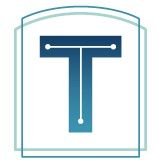 hose who come will find the same Wake Forest requirements of old. Students must live on the Reynolda Campus their first three years. A new freshman dorm under construction can house an additional 224 students when it opens in January, helping to absorb the gradual enrollment growth expected for Wake Downtown. Students will continue to take required liberal arts courses their first two years, though they may choose some courses that boost their engineering or biomedical interests. They still will declare their major in the spring of their sophomore year.

“We’re not abandoning our Reynolda residential requirement. A part of our educational model is that face-to-face engagement of students and faculty in a residential setting,” Boswell said. “This is the era of the eight-second attention span. We want to, while we have them, say, ‘Look, there’s richness in your fellow human beings and figuring out how to live together and develop ideas.’ We hope our model won’t be that loner in the lab looking at her computer. It will be a more engaged, thoughtful interaction with other people, which is what you see in Silicon Valley. … I think we will want to promote that type of community and engagement in the world.”

Connecting With the City

Alexander said the University will look for opportunities for undergraduates to address the needs of the urban community they will join.

“It would be irresponsible if we brought 18-year-olds to campus who are idealistic, energetic and activist-minded and just sheltered them away … and didn’t introduce them to some of the challenges that exist in the city and provide them opportunities to be part of that process,” she said. “This is increasing their education, not just in the classroom, but how do we live out our Pro Humanitate mission, not just around the world but in the city we call home? How can we be builders of the community and benefit the community in new ways?”

Kersh, who chairs the Winston-Salem mayor’s “Poverty Thought Force,” already has convened community forums on that topic in Biotech Place in Innovation Quarter and plans more. Having Wake Downtown will boost efforts to interact with the community, he said.

The University also is reaching out to its arts faculty and local arts groups to integrate the visual and performing arts into Innovation Quarter.

“We’re adjacent to the arts corridor in the City of Arts and Innovation. We’ve got the innovation piece, a big check mark there,” Kersh said. “We’d like to make sure the arts is a significant part of this.”

Growing Our Own Talent

Gayle Anderson, president and chief executive officer of the Winston-Salem Chamber of Commerce, is excited to see Wake Downtown. With Maynard, Santago and others, she has pushed hard to support biotechnology in Winston-Salem.

“What’s important from an economic development perspective, you need engineering talent to completely commercialize almost any discovery that happens, not just in the medical field, but in the broader fields,” Anderson said. “This gives us a toehold in building that talent, growing our own, and as students become familiar with the community, they want to stay here rather than companies needing to bring them in from elsewhere.”

“If we do it right, you’re going to be wowed,” Boswell, the trustees’ chair, said. “If you’re an 18-year-old who wants to work in biomedical sciences, but you don’t know exactly what, we can inspire them to want and think and dream of something even more diverse than just a straight and narrow path to medical school.”

Anderson and Boswell predict alumni will be proud of what they see. 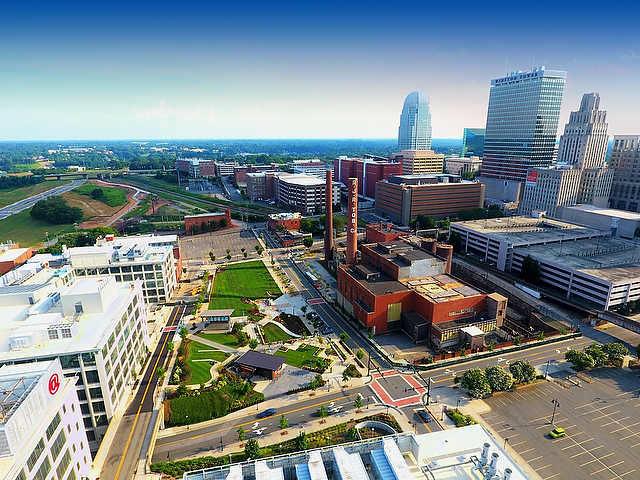 Winston-Salem once produced “many of the world’s best known brands of tobacco, wagons, underwear, hosiery and harnesses,” according to the Winston-Salem Chamber of Commerce. Today, besides manufacturing, its evolving economy relies on jobs in health care, education, technology and financial services.
Photo by Wings Over Winston (www.wingsover.ws)

“For alumni to be able to come down and see the impact the University is having on the entire community, there ought to be a real sense of pride and accomplishment for that,” Anderson said.

Boswell said, “Alumni should be excited that, like it has in the past, Wake Forest is addressing the problems of contemporary society and how our traditions can be deployed to meet and address those problems. It’s not a different Wake Forest from what alumni have known; it’s just that we live in a different time.”

“Our alumni worry that we’ll change out of existence and become just like everybody else,” Boswell said. “But that’s not where we’re going. We say we want to help young people lead lives that matter. You can only lead a life that matters if you are engaged in your current world. This is a set of areas where we haven’t been engaged as deeply as we’re going to be able to do it now.”