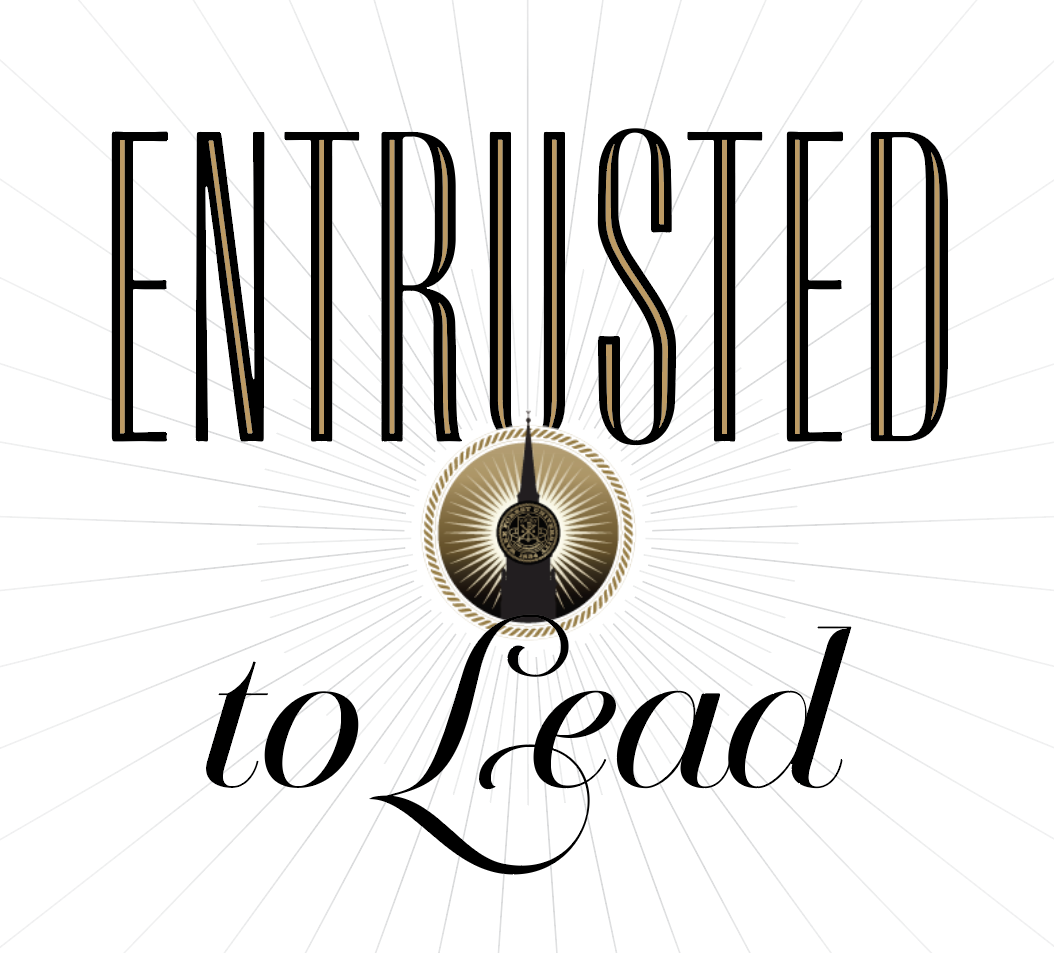 With ceremonial splendor, the University formally welcomed Dr. Susan R. Wente on March 25 as its 14th president and its first female president since the founding of Wake Forest in 1834. 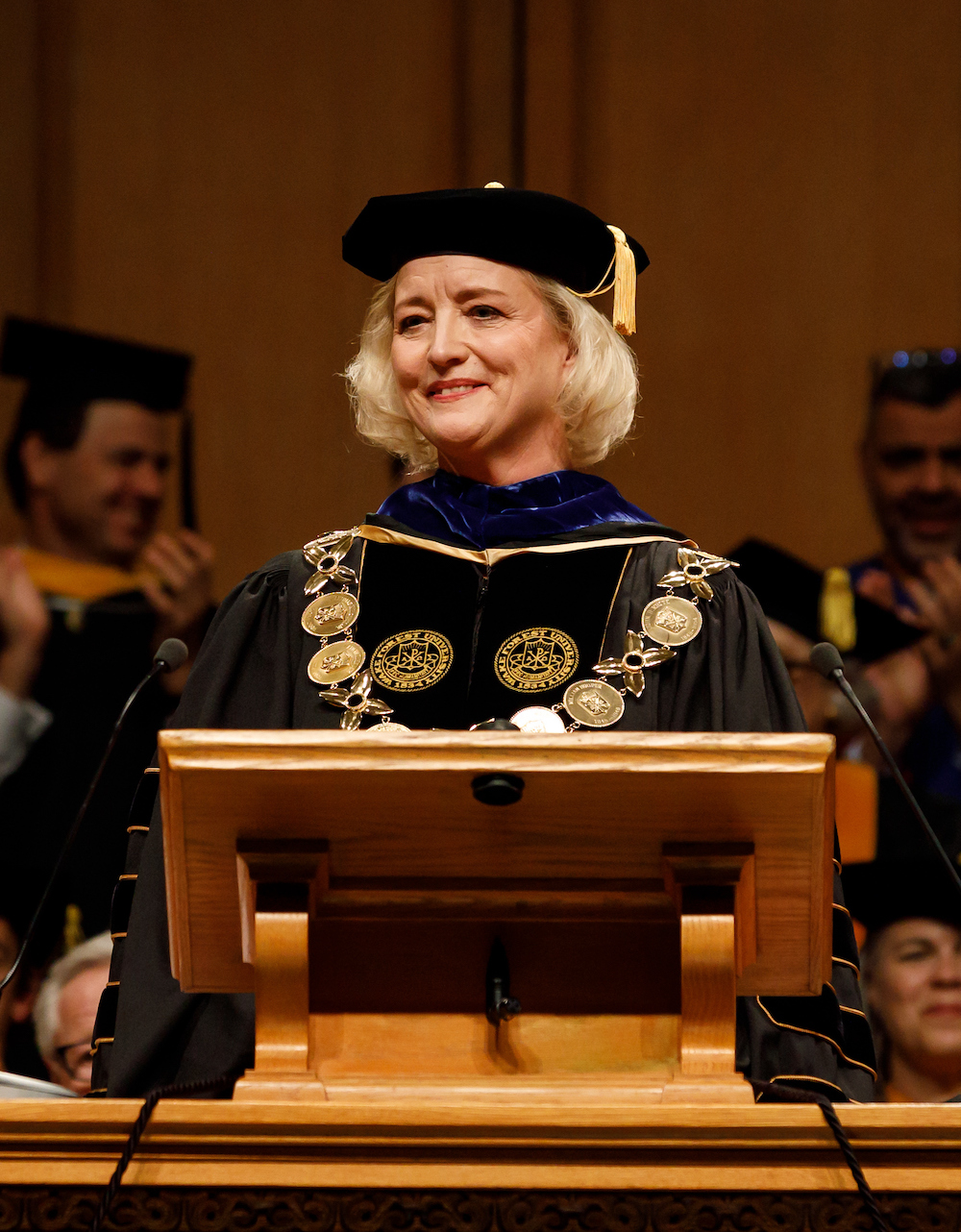 In Wait Chapel with family, friends, trustees, faculty, staff, students, alumni and delegates from other educational institutions and the community in attendance, Wente, a renowned biomedical scientist, listened as speakers greeted her with expressions of good will and high hopes for collaboration and cultivation of not only “the very soul of Wake Forest” but also for “the common good.” 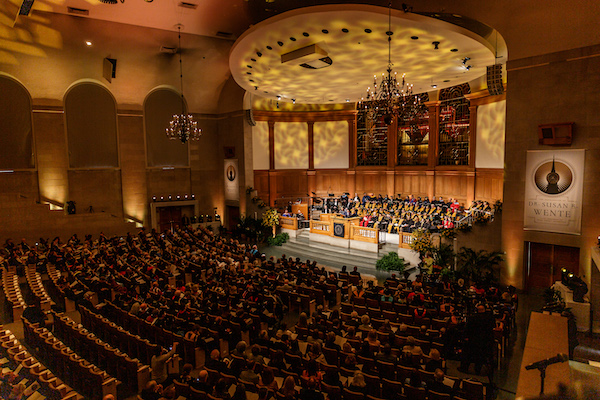 Matthew A. King (’82, P ’08, ’12), chair of the University Board of Trustees, at left, led the investiture, praising Wente as “an accomplished teacher and scholar: professor of cell and developmental biology” and a higher education innovator. He extended the board’s support for her presidency “with the conviction that together, under her leadership, we will seek to live the University’s motto, Pro Humanitate, among our constituencies and throughout society.”

"President Wente has shown herself to be a person who values discovery, seeks excellence and holds a strong vision for the future of Wake Forest.” —Matthew King (’82, P ’08, ’12),
chair of Wake Forest Board of Trustees

Wente began her role as president on July 1, 2021, but on this day, amid inaugural pomp and circumstance, she answered King’s call to step forward to the front of the podium for the formal installation. Trustee Gerald F. Roach (’80, JD ’82, P ’09, ’12), chair of the presidential search committee, and Herman E. Eure (Ph.D. ’74, P ’23), vice chair of the trustees, member of the presidential search committee and professor emeritus of biology, placed the Presidential Collar of State over Wente’s head. The chain of medallions, which will be part of her ceremonial academic regalia, is engraved with the names and dates of service of her predecessors. 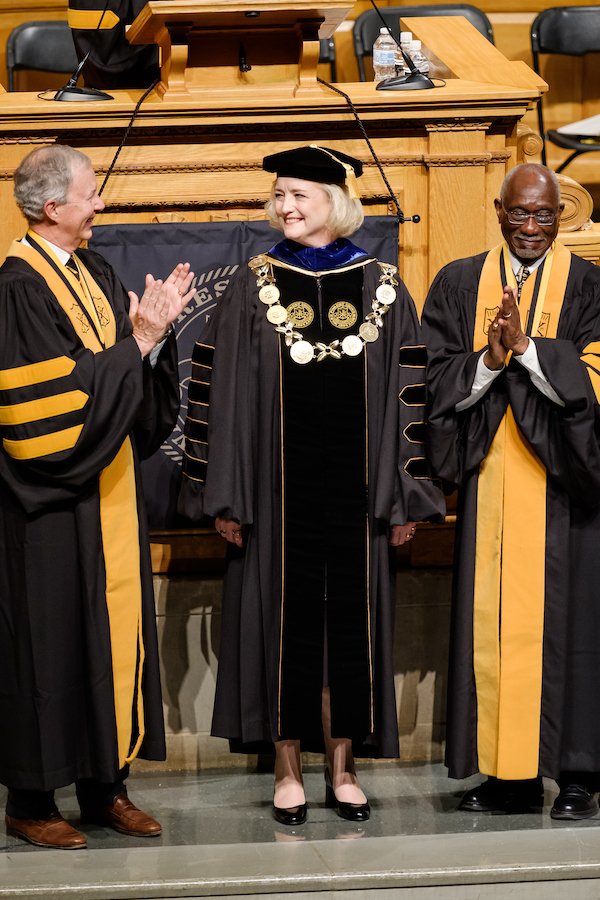 Audience members rose to their feet for a hearty ovation for the new president. A Nebraska native, she grew up mainly in Emmetsburg, Iowa. She is known as a hard worker who managed a local restaurant after school as a teenager and worked in summers detasseling corn or tending soybean fields. College — where she discovered her passion for biological research — and a steady trajectory of academic success changed her life. She arrived at Wake Forest from Vanderbilt University, where she was provost and vice chancellor for academic affairs and spent nearly a year as interim chancellor. She succeeded President Emeritus Nathan O. Hatch (L.H.D. ’21), who retired last June after serving from 2005 to 2021. 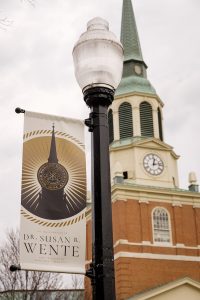 Wente presented her inaugural address as a lesson in the power of education and how it made possible myriad opportunities in her life. She expressed thanks to many in attendance, including her parents, Harold and Betty Wente, first-generation students who went on to become an educator with a Ph.D. and a nurse, respectively. “(They) instilled in me the virtues and values needed to navigate life,” she said. To her husband, Chris Hardy, Ph.D., a geneticist she met when they were fellow graduate students at the University of California, Berkeley, she thanked him for his sacrifices and “for never doubting my path.”

“Dr. Wente, as the mantle of leadership is officially placed upon your shoulders today, may you know that you have others committed to the noble calling of education walking beside you. Your fellow educators and institutional leaders support you in the work ahead and look forward to opportunities to work together as we advance the efforts of cultivating intelligence and character for future generations.” — Elwood L. Robinson, chancellor of Winston-Salem State University 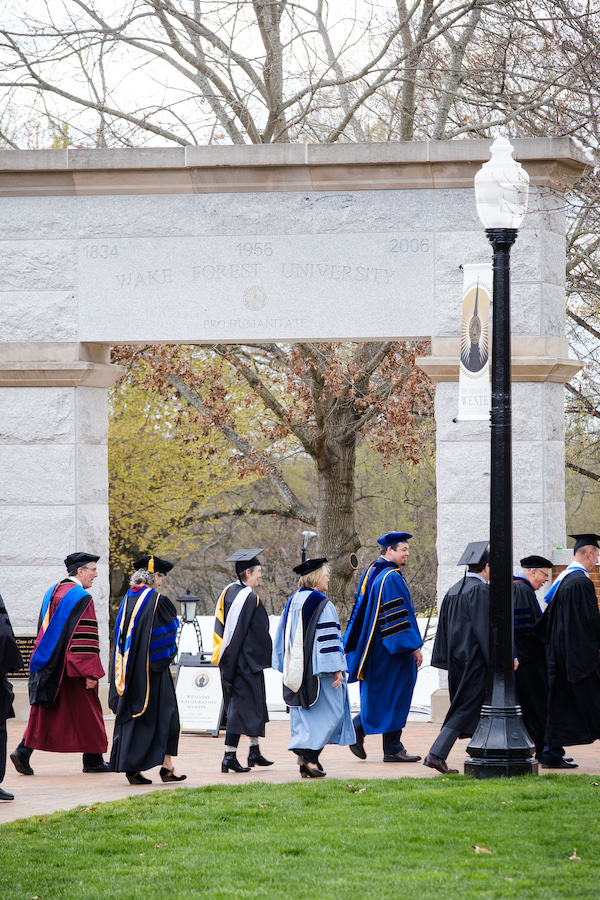 Wente drew on her experience as a scientist to connect the transformative power of education to cell biology and described Wake Forest as “a catalyst for good.” (Read the speech here.) She compared the work of enzymes as catalysts for change in the cells of living organisms to the work of great universities creating change for good in society. 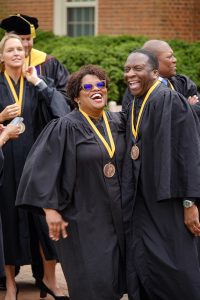 “Through immersive education, ethical inquiry and experiential learning; from the fine arts to social sciences; to offering exceptional opportunities for scholastic, athletic and personal development … Wake Forest catalyzes the imagination, intellect and creativity of our students,” she said.

She called on the University to be “a catalyst for opportunity,” seeking not to lower the bar but “the barriers” to each person’s potential. “I believe innate talent and capacity to achieve are universally distributed across society. Opportunity is not,” she said.

“We are grateful for the vision and willingness of Wake Forest leaders — past and present — to embrace many shared efforts for the good of this city.” —Allen Joines (LL.D. ’09), mayor of Winston-Salem, below 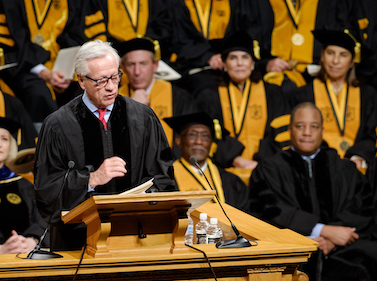 "Dr. Wente, as you become more at home with Wake Forest, know that you have the support of parents and families who have come to love this place because of the exceptional education, the care and challenge it has provided for our children.” — Bonnie S. Carter (P ’22), president of Parents’ Council 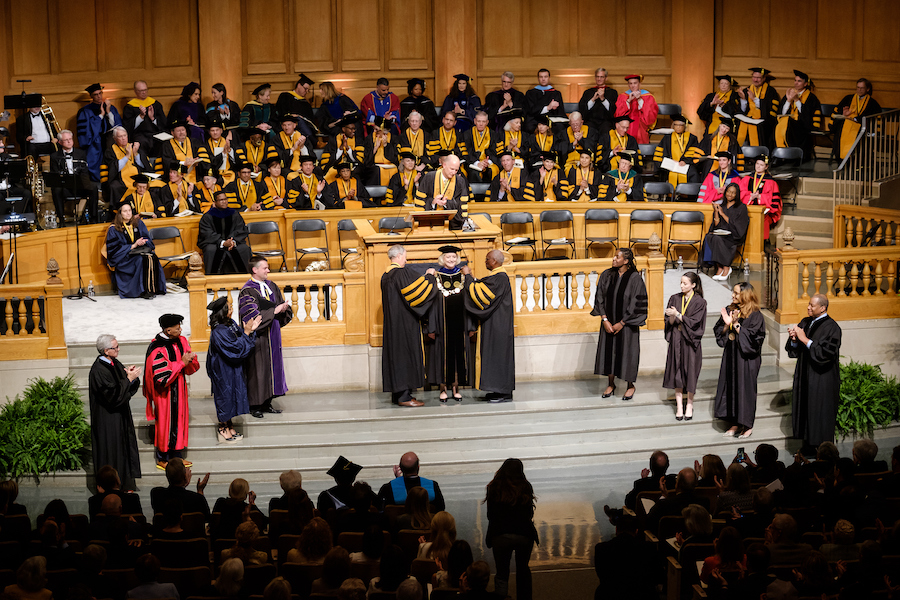 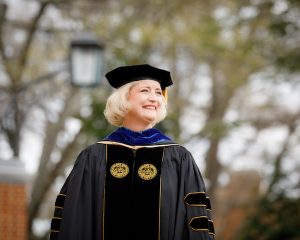 Wente then explained her devotion to expanding access through new scholarships. By the end of 2022, she said, the University will raise money needed to support 100 new scholarships — the “For Humanity” initiative. “When we create opportunities at Wake Forest and share the transformative power of education, we deliver the mission of Pro Humanitate to the world,” she said.

“As a great university, we are going to be a catalyst for good — for learning and discovery, for access and opportunity, for innovation and society,” she said. 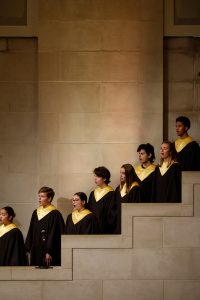 She also focused on the power of community partnerships, for the region, the city, Innovation Quarter in Winston-Salem and The Pearl innovation district in Charlotte (the site for the University’s second medical school campus) — places where Wake Forest’s academic output “makes a real-world difference.”

The truth in the words “real-world difference” in Wake Foresters’ lives was easy to see — and hear — on this day in Wait Chapel. Organ, percussion and brass ensemble musicians performed an original work, “Fanfare Pro Humanitate,”by the University’s composer-in-residence Dan Locklair. Adarian Sneed, a senior, read “A Brave and Startling Truth,” a poem by the late Maya Angelou (L.H.D. ’77), Reynolds Professor of American Studies. And in the audience, dressed in academic regalia, were Wake Forest alumni representing every graduating class since 1950 and with the 99-year-old Provost Emeritus Edwin G. Wilson (’43, P ’91, ’93) heading the delegation from his wheelchair. 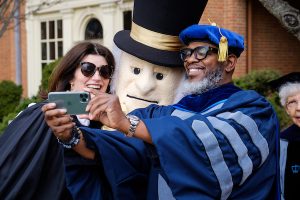 Among this group of witnesses to history on this inauguration day, Wilson could trace his Wake Forest days far back into the 20th century, to the original campus in Wake County roughly 100 miles away. It was there Wilson began his freshman year on Sept. 1, 1939, the day Germany invaded Poland, and three years before Wake Forest reacted to falling enrollment in World War II by changing its admissions policy. Officially, women could finally enroll. Forty-seven did. As Wente said in her speech, they “paved the way for me to stand here today.”

“Dr. Wente, thank you for accepting the responsibility of cultivating this very soul of Wake Forest. We are pleased that you value the voices of those who have carried forth the motto into the world. As you lead our alma mater, we hope that we will be a valuable resource to you and those who lead beside you.” — Alex Reyes Schroeder (’06, JD ’09), president of Alumni Council 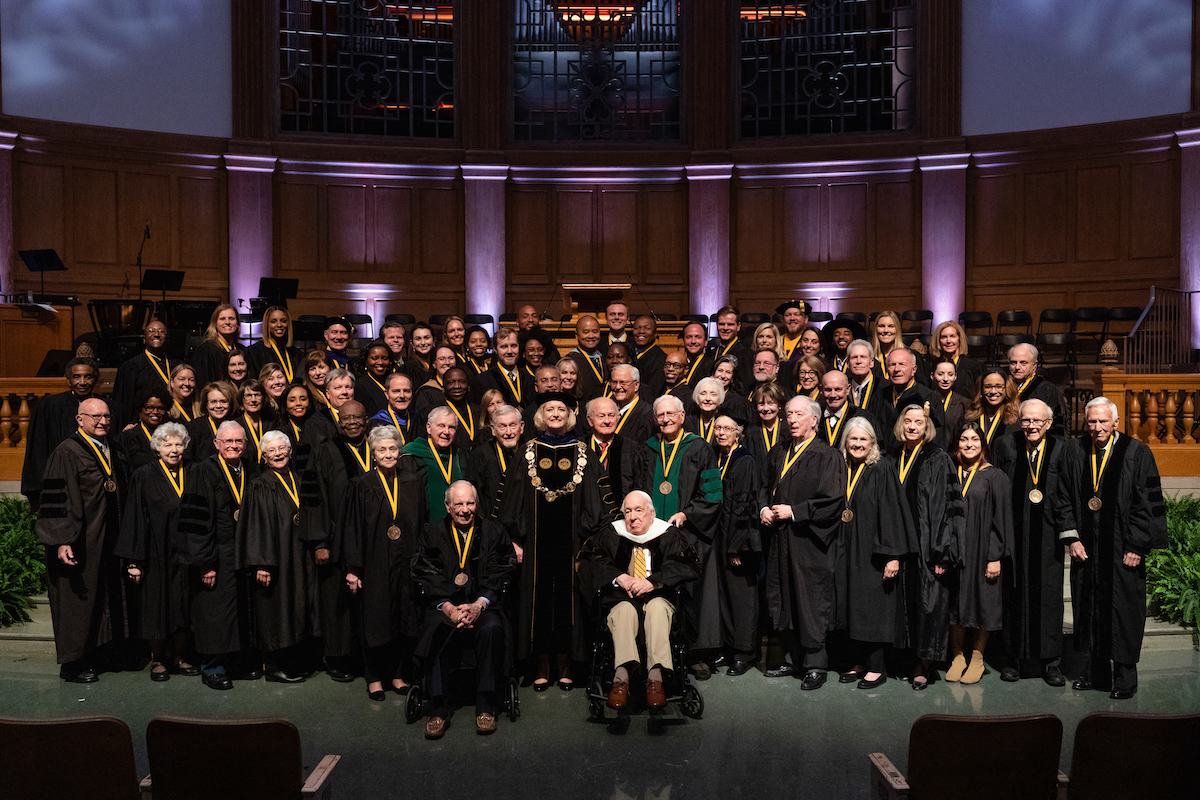 Provost Emeritus Ed Wilson ('43, P '91, '93), seated center front, led these alumni representing each class from 1950 to 2021 in a procession into Wait Chapel for the inauguration of President Susan R. Wente.

The Presidential Collar of State 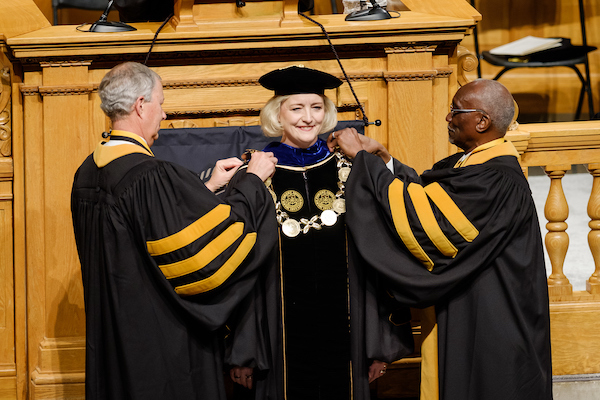 Often referred to as the Presidential Chain of Office, the Presidential Collar of State is part of the academic regalia worn by the president at Commencement and convocations. Created by artist Susannah Ravenswing, the collar is crafted of heavy gold electroplate over sterling silver. With the Wake Forest seal as the focal point, the collar features engraved circular links containing the names of past presidents and magnolia leaf crosses set with black onyx stones. In 1988, Life Trustee and former board chair Weston P. Hatfield (’41, LL.D. ’96, P ’76) commissioned the creation of the ceremonial collar to honor the office of the president and the service of Wake Forest’s 12th president, Thomas K. Hearn Jr. 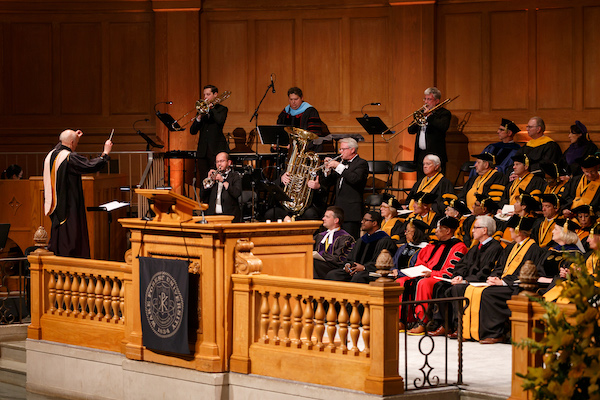 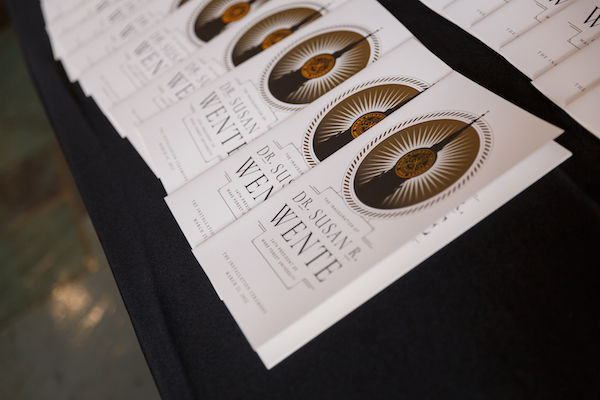 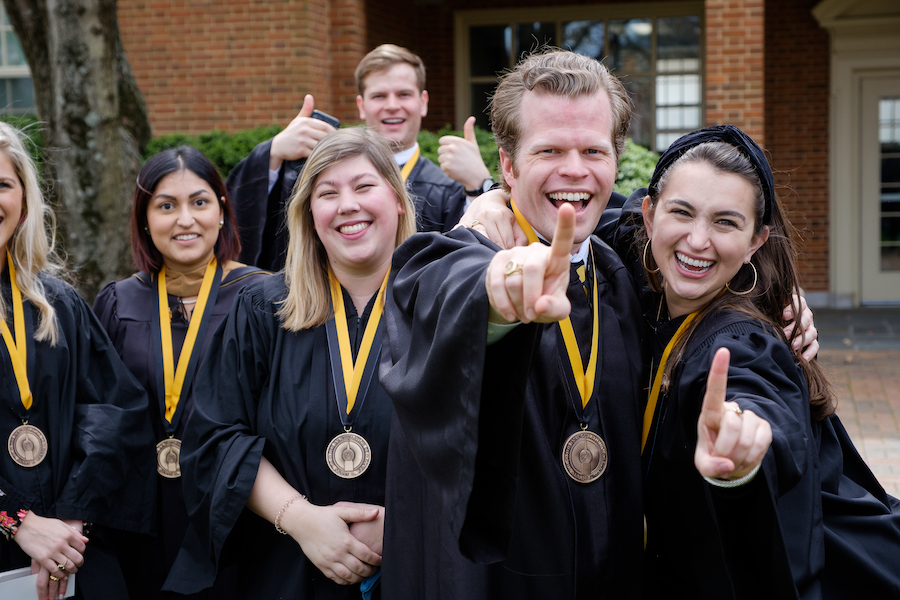 Sporting keepsake medallions, representatives from alumni classes were in a celebratory mood awaiting the ceremony. 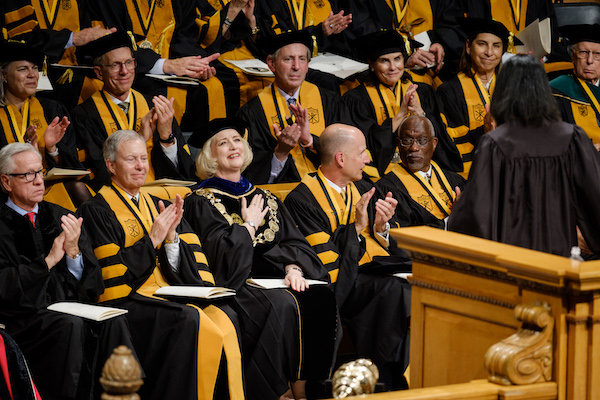 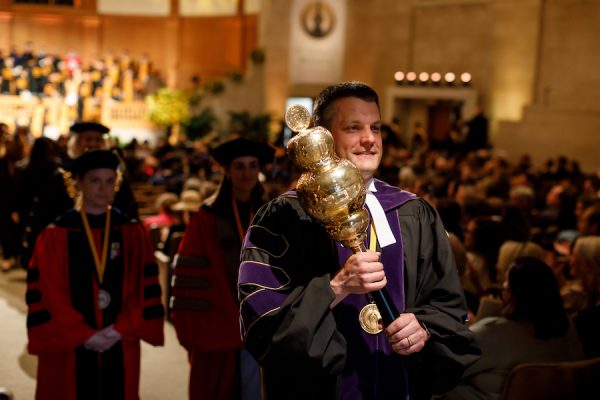 The mace is a traditional symbol of authority and has been carried at the head of academic processions at commencement and convocations since 1968. It is shaped from a single sheet of silver covered with gold and has an ebony handle. Etchings of Wait Chapel, Reynolda Hall, an arch on campus and the library’s cupola are on the middle section. Pictures of the Old Campus are on the top section. On the bottom are panoramas of the medical school, Carswell Hall and Winston-Salem’s skyline. Each section is separated by raised drawings of magnolias. A seal of the University is at the top of the mace. The late Thomas H. Davis (LL.D. ’84) gave the mace in 1968 in honor of his father, Egbert Lawrence Davis Sr. (LL.B. 1904, P ’33).

“You are a kindred spirit when it comes to the value we place on faculty connection with students, scholarly achievement and contributions to shaping the educational mission that has defined this institution for nearly two centuries.” — Matthew T. Phillips (’00, JD ’06), president of Faculty Senate. Above, he carried the mace in the procession. 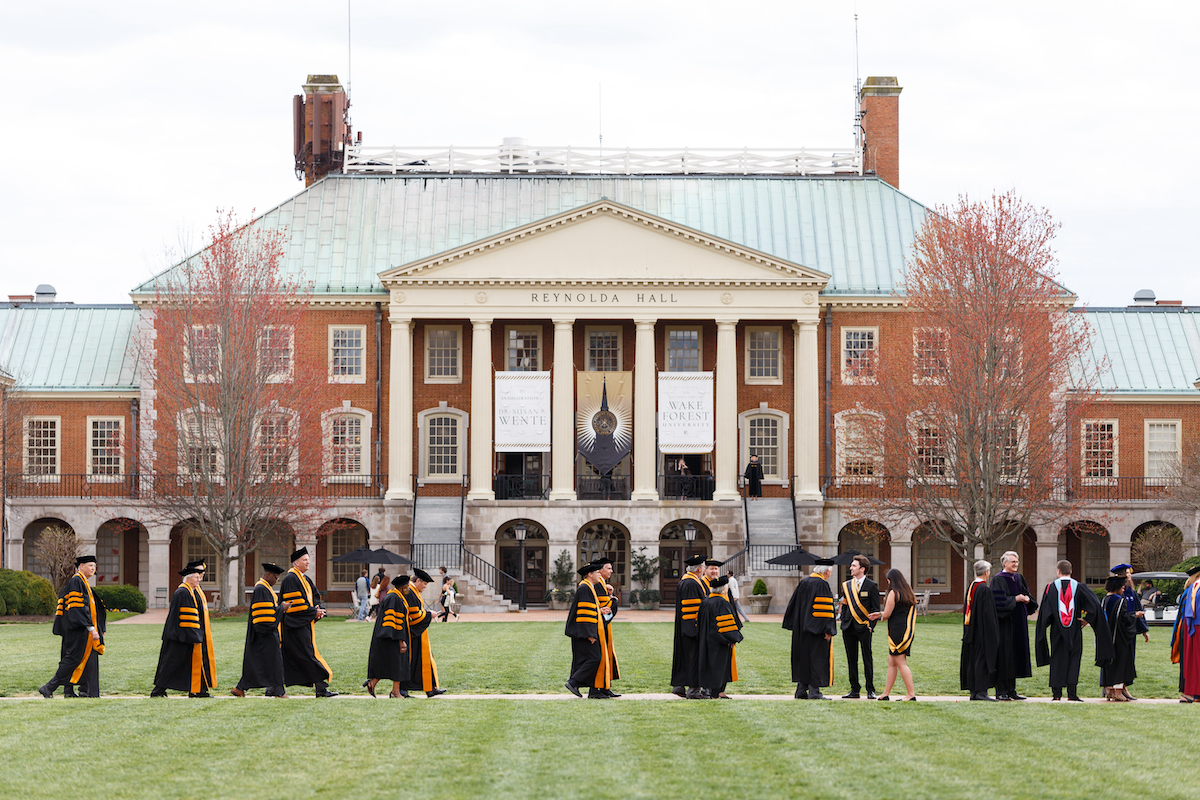 A Catalyst for Good | In her inaugural address, President Susan R. Wente calls on the University to leverage what makes Wake Forest distinctive to have the greatest impact. 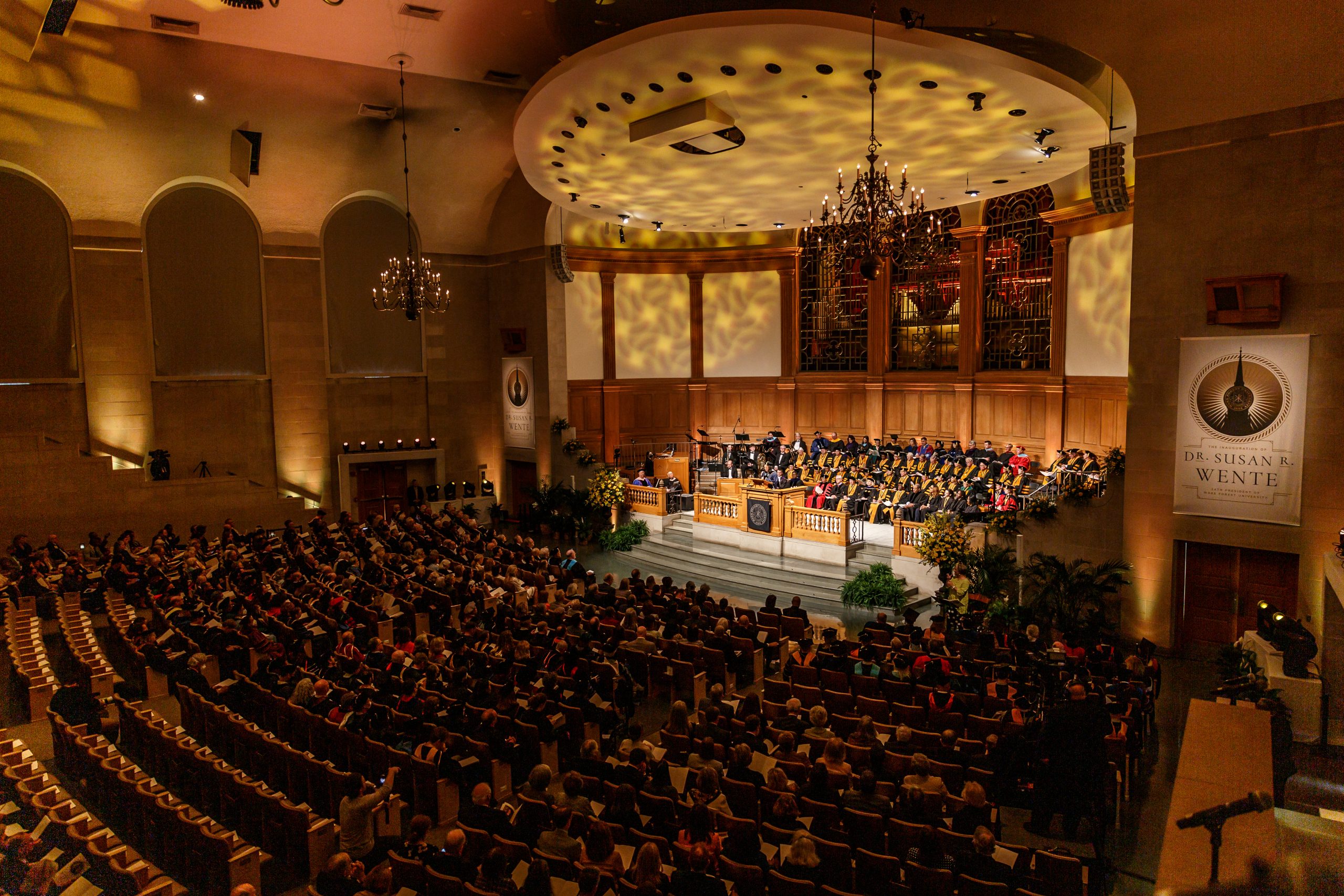