OK, we admit it. We don’t know all the words to the fight song, especially that slightly creepy second verse about exploring her and patrolling her. But we get the gist of it: “a glass of the finest” and “unrivaled by any.” And when the Spirit of the Old Gold and Black strikes up the tune, we always know when to yell, “Go Deacs!”

The graceful, flowing, iconic “WFC” ironwork graces Reynolda Hall, Benson University Center, Tribble Hall and other campus buildings. You’ll find it inside the Z. Smith Reynolds Library, too, in the stacks and in the Rare Books Room. Check out the light fixtures in the Green Room in Reynolda Hall. That’s our favorite.

Who else but Abe Elmore (’55) of Dunn, N.C., can claim a rolling Deac Mobile for tailgating at BB&T Field? 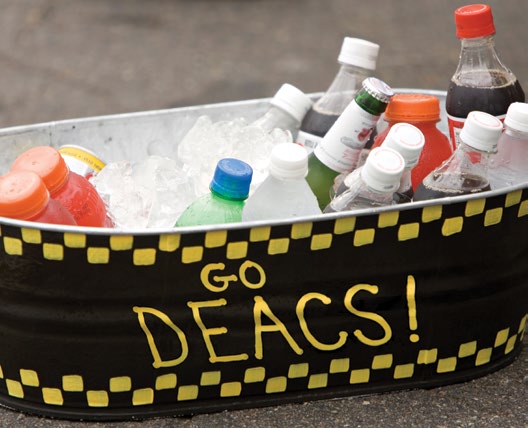 He and the self-described “has-beens” gang from the Old Campus gather around Elmore’s tricked-out 1986 airport bus and tell tales. His partymobile is a Deacon legend.

For any student or alum, the tailgate scene is the place to be. Die-hard Deacs claim their parking spots before game day, pitching tents and crossing thumbs for boring weather. Early Saturday morning, chef-wannabe Deacs bring out the griddle for bacon and eggs, long before time to grill the ribs or throw down the extra crispy.

Tents, a football, a cooler, camping chairs, bean-bag toss, fancy wineglasses, run-of-the-mill “go” cups, Wake Forest flags and ample tunes — these are the accoutrements. Then comes the cruising — that saunter with attitude from tailgate to tailgate. Before you know it, it’s halftime. Some Deacs never set foot in the stadium. The tailgate’s the thing. 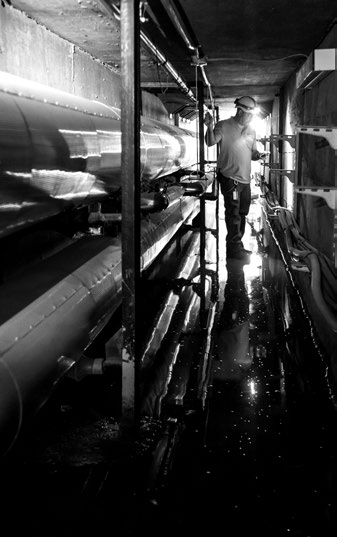 The subterranean tour of campus is dark, claustrophobic, dangerous and strictly forbidden now. Rats. But once upon a time … .

The golf icon, with his 62 PGA Tour wins and seven major championship titles, is only the sixth athlete in history to receive the U.S. Congressional Gold Medal.

Secluded, yet just steps away from campus, is the historic Reynolda estate. At Reynolda House Museum of American Art, immerse yourself in art and culture. In Reynolda Gardens, enjoy an invigorating jog or a romantic stroll along its lusciously quiet trails. Share a picnic near the waterfall or lose yourself among the solitude of fragrant flowers and trickling fountains. In Reynolda Village, shop around then meet up with friends for dinner at Village Tavern, al fresco.

LIGHTING OF THE QUAD

Bring a blanket or warm clothing to share with the less fortunate and enjoy the annual festive kickoff to the holiday season.

Alex Katz’ larger-than-life portrait of his only son — a painting purchased in 1973 for the Student Union Collection of Contemporary Art — once cast his disconcerting gaze on students studying in Reynolda Hall’s Green Room. More recently, he’s watched over visitors in the Benson University Center. No matter where he is, if his wide-eyed stare is upon you, you will never forget it.

Sit a spell in Lloyd the Barber’s chair in the basement of Taylor Residence Hall, and he’ll likely lean in and whisper the latest Wake Forest gossip: “You know what I heard?”

If you want to know what’s going on at Wake Forest, what’s really going on, Lloyd’s shop is the place to go. For 37 years, the bald barber of Wake Forest — whose last name is not Barber, as many believe, but Howard — has dispensed haircuts and tall tales to Wake Forest presidents, faculty, students and alumni.

From the basement of the Social Sciences Building on the Old Campus to the second floor of Reynolda Hall to the fifth floor of Benson University Center today, Pub Row’s address has changed but not its function. Pub Row has always been the place where students could try their hand at writing or photography or broadcasting, sparking many to seek a career in journalism.

Wake Forest’s proud tradition of freedom of inquiry and expression encourages questioning and exploration. Whether we’re engaged in vigorous classroom discussions or open forums, marveling at the skilled arguments of a stellar debate squad or hosting guest speakers and two Presidential Debates (1988, 2000), we value all points of view. So go ahead: speak your mind.

Reverent and irreverent, prayerful and playful, wise and witty, there’s never been a more aptly named chaplain than Christman.

Brother Ed turned the Pre-School Conference and the Moravian Christmas Lovefeast into Wake Forest traditions. Before retiring in 2003, he gleefully played the role of counselor, friend and soul of the University (along with turns in University theatre productions as Samuel Wait, Noah and God).

Before it offered vegan delicacies, an omelet station and pasta of the day, the venerable Pit had its charms. Dinner might consist of a bacon cheeseburger and a Polar Bear ice cream (we know one alum freshman year who ate that meal every night from Thanksgiving to winter break and suffered a tragic blue-jeans ending), but never mind the menu back then — or today. Pick a table and sit … and sit … and sit. Friends join you and wander away, only to be replaced by others coming from class or the library. Party banter or a serious confab makes for a Pit Sit. Through the ages the Pit Sit has spawned deeper friendships, intellectual arguments and — blame it on “Animal House” — the occasional food fight punctuated by a splat of mystery meat and potatoes served in the ancient days known as the ’70s.

Nothing disgusting here, but we felt like belting out the rock ‘n’ roll tune. The smell in question is comforting, actually.

For many alumni it’s as familiar as an old sweater, as treasured as a first edition. Wake Forest changes and the library expands, but this odor lingers through the ages. “A combination of grassy notes with a tang of acids and a hint of vanilla over an underlying mustiness” is how mentalfloss.com reported on the findings of an international team of chemists describing the unique odor of old books in a study. Sounds just like the cherished library stacks to us, hallowed may they remain despite their tang.

We come to Wake Forest, leaving behind moms in places like North Carolina, New Jersey, Florida, Texas or Connecticut. But we leave Wake Forest singing the praises of a shared matriarchal influence: Mother, so dear. 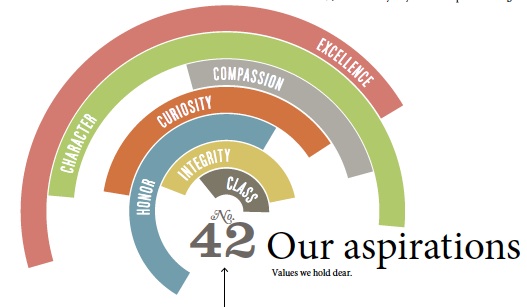 Somewhere in Tribble Hall lives the ghost of a student doomed to wander the tangled labyrinth like a lost soul in the famous Escher print, never to find his way out. With its confounding layout of alternating floors and A-B-C wings, warren of stairwells and corridors, seemingly nonsensical room labels of numbers and letters, basement hideaway offices and a U.S. Navy Cold War doomsday shelter, it was described when it opened in 1963 as a “poorly designed split level.” Tribble befuddles even longtime faculty members, not to mention directionally challenged freshmen, but it remains the campus building we love … to get lost in.

Fifteen Demon Deacons have been selected for this prestigious scholarship to study at England’s Oxford University. They are: 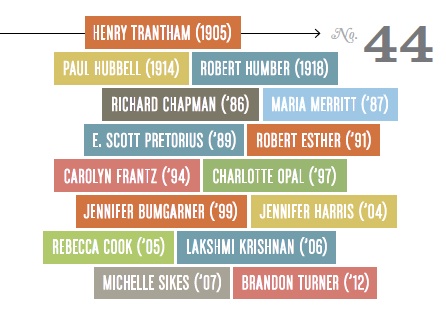 Deacon pride also extends to the many other scholarship recipients for postgraduate study including Truman, Marshall, Luce and Fulbright winners, among others.

Greek life remains a visible part of the campus scene, and it’s not all about parties. In 2012 the network of chapters in the Interfraternity, Panhellenic and National Pan-Hellenic Councils helped raise an estimated $138,000 — more than half the total raised on campus — for the Brian Piccolo Cancer Fund. Philanthropy and service run the gamut from Campus Kitchen to the Ronald McDonald House and Brenner Children’s Hospital to Susan G. Komen Foundation events and the local food bank.

One is a brand name, the other student-run. Their fare? 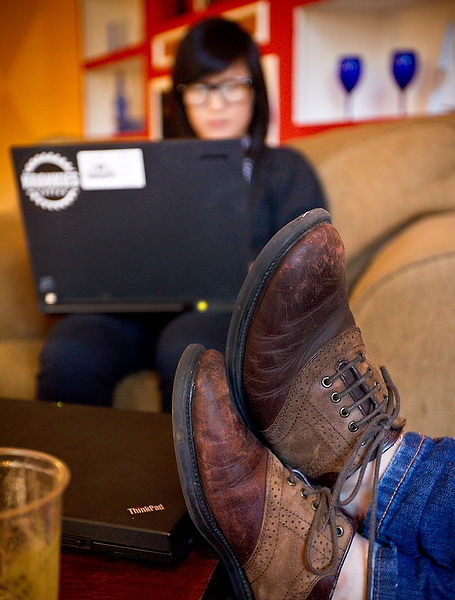 The caffeine fix that keeps college students running on full steam. Starbucks and Campus Grounds may not be recognizable to alums who attended a decade ago — the shops opened in 2008 and 2003 respectively — but current students and faculty can often be found dropping in at either coffeehouse between classes for a latte, a scone or a meeting with friends. Starbucks provides the perfect perch for people-watching, while Campus Grounds offers live music for the studying crowd on Tuesdays. On any day, both provide a welcome retreat for students and tour groups alike.

They captivated you on your first campus visit and embraced you with a sentimental adieu upon your final goodbye. Wake Forest’s mystique wafts gently through the branches of its magnificent family of trees. Their status is exalted in our very name. Connecting past and future, they remain “constant and true,” celebrating with us in good times — comforting us in sad times — always offering peace, security, joy and renewal. Long may they be rolled.

WHEN IT REALLY WAS WORK FOREST

Sixteen students arrived in 1834 at a farm near Raleigh, N.C., to attend the Wake Forest Institute, chartered as a literary and manual labor institute. Each student was expected to bring a pair of sheets, a pair of towels, an axe and a hoe. 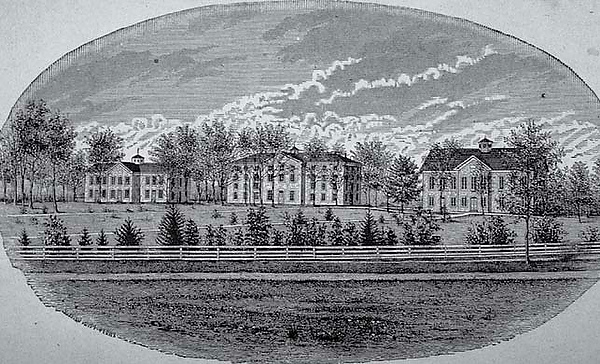 Describing Wake Forest life in an 1835 letter, student George Washington said after the roll is called, “students take their appropriate stations around their respective leaders, axes with axes, hoes with hoes, and then we start. … Those with axes make for the woods, where they fell the sturdy oaks and divide them into rails; the grubbers take the field, and sweat with heavy blows over the roots and shrubs that have been encroaching upon their clear land. Those with weeding hoes find much variety in their employment; sometimes they cut down cornstalks, sometimes they take up leaves, and now you may see them in the barn yard piling up manure.”

Just checking to see if you were paying attention. But Wake Forest Magazine is, after all, a national award winner, with Class Notes perennially a crowd favorite. Keep those birth announcements for Baby Deacs coming!

Enter Tribble Hall C201, the English seminar room, and regard a different era. The “Victorian gentleman’s study,” as it was called when it opened in the 1970s, provides a perfectly ornate setting for freshman comp. Cast your eyes upon the walnut paneling, dark red carpet, gaslight chandeliers, heavy velvet curtains, fireplace of marble and walnut, the mirror stretching floor to ceiling and the exquisite glass-front bookcases. Dickens never had it so comfortable unless Downton Abbey were to light up a vacancy sign.

101 Things We Love About Wake Forest

Thanks also to contributors Katie Mahone (’13), Clare Rizer (’13) and those of you who answered our call for ideas on Facebook.

Did we leave out one of your favorites?